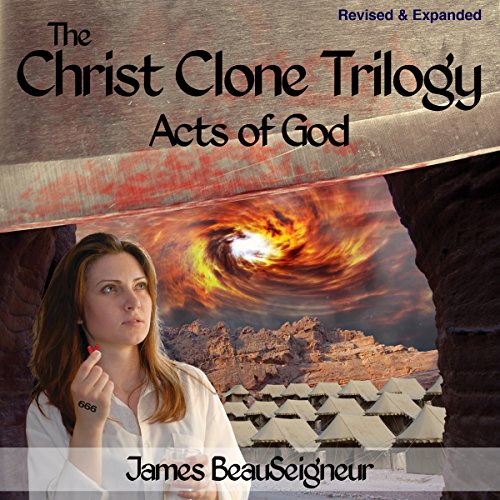 Two nuclear wars. Three asteroids. Demonic madness that kills one third of the world's population. Into this, a savior will rise, cloned from Christ. It's not fiction. It's prophecy.

It is the dawn of the New Age. After six millennia of stagnation, humanity stands on the brink of its final great evolutionary step. But it is a step that has come at tremendous cost. Half the world's population is dead. The Pacific Ocean is barren. The forests of North and South America are a charred wasteland. Central America has been reduced to rubble. The planet's survivors face a fundamental choice: follow Christopher Goodman, the Messiah of the New Age and clone of Jesus Christ, or cling to the very worldview and the God who has wrought this destruction.

Under Christopher's leadership the world begins to experience miraculous recovery, and soon the first signs of humankind's evolution emerge, just as Christopher promised. His fanatical opponents, however, charge that he is the Antichrist, and that his name, when written in Hebrew has the numeric value of 666.

Reluctantly, Christopher determines to use their own superstitions against these fanatics. He reminds the world that the prophecies of Revelation were written by the Apostle John, and it was John, who after using his dark powers to survive for 2000 years, is responsible for the near annihilation of the planet. It was John, whose writings in the Bible radically distort what is to come and who will emerge the victor.

Each person must choose. All that's certain is that the world is catapulting toward a final apocalyptic conflict, and humanity's salvation or damnation depend on the true nature of the Christ Clone.

great read for all

great book, and another series that. reminds us of what life could be.. I'm a big LB fan and this series is another must have that looks into. more modern view of what the great deception could be.. my only wish it could have been longer to cover more prophecies to life in the series but like LB this type of book can make people think

the best of three books

I found the series an interesting take on end time fiction. I found some of the interpretation of scripture to be a little wanting. The Greek Orthodox Church doesn't put much stock in rapture fiction, but I find it an interesting way to see how the world view revaluation.

Good narrator, though I listen at three times speed so it doesn't factor in my review as much as story line.

What did you love best about Acts of God?

While this was a fiction book, because of its content, I can't even answer this.

I couldn't listen to it. Just like the entire last book of Left Behind. While most of what's in here can be said to be "documented" in the Bible, that whole last part is TOTALLY fiction and it was just too ridiculous for me.

Would you be willing to try another one of Kevin O'Brien’s performances?

Almost any other narrator on earth would have made this boy ENJOYABLE.