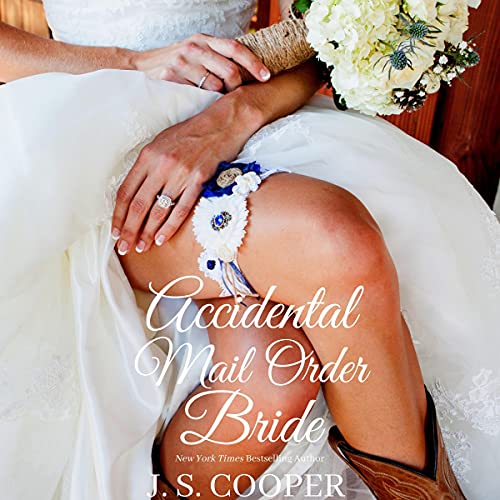 City girl in Montana looking for her Romeo...

Sounds like the start to a Hallmark movie right? Well, it would, if they had movies about idiot women flying across the country to marry a man they’d never met.

Yup, that’s what I did. I responded to an ad in a random newspaper that I found on the train. And now I’m trying to find Horseshoe Ranch so that I can marry some cowboy I’ve never even seen. And no, this isn’t the 1800s. I’m just desperate.

To make matters worse, the cowboy doesn’t even know I’m coming. His mom and dad arranged it all. The only reason I’m going is because I have $100 to my name and an old mafia boyfriend after me. I figured life couldn’t get any worse in Montana. I was wrong.

In my excitement, I left the address and phone number to the ranch at home, so now I’m here in Montana, and I have no idea where I’m supposed to go. So I took a taxi and stopped at a local bar to ask for directions. And that’s when all my problems began.

for honest review. when answering ad for a mail order bride Lucy Kensington moves to Montana bitterroot valley to horseshoe ranch with the Hamilton's who have seven sons . this is a fantastic well written beautiful 10 star romance, that will have you laughing and not wanting to put the book down .I can't wait to read the other brothers stories.

I enjoyed Lucy and Austin's story.

"Accidental Mail Order Bride" (The Brothers of Horseshoe Ranch Book 1) by J. S. Cooper is a great story. I enjoyed Lucy and Austin's story. This is a nice start to this new series. This story has romance, humor, cowboys, family, close friends, entertaining characters, and more. I'm looking forward to seeing what happens next with this family. Recommend to all fans of romance, family, cowboys, and series.

This book was so sweet. Someone willing to step out of their comfort zone and to try something new. Lucy may have gotten herself in a little trouble but it all workex out. Would highly recommend this book to anyone and cant wait for the rest to come out!!!!!

Some of the dialogue at the end was a bit formulaic and hokie, but the story over all was sweet and definitely worth the credit.

Lucy is a girl who needs a life change and answers a mail-order-bride ad and moves to Montana pretty much site unseen.
Austin is a gruff grumpy pants cowboy.

In the beginning hijinks ensues and provides a few laugh out loud moments. Slowly the story regulates in to a sweet romance.

The ending is predictable but still satisfying.

I loved reading the book and to listen to it here on Audible was great! I love the storyline a lot. Can not wait to get my hands on the next book in this series.
Highly recommend!

I found it was well written and developed and just all round very enjoyable. Very hard to describe anything thing that is going on with out giving the story away. Fantastic chemistry and interaction between the characters.
The narrator did a brilliant job of bring this book alive.
I voluntarily reviewed a copy of this book.

You will absolutely love this story. It touches your heart. So grab some tissues and sit back and relax. Horseshoe Ranch will want you wanting to become a cowboy/girl!!! the narrator is great! but the male that reads the bonus section has a yummy voice.

This book was one I had to read and listen too, so I could have all the feelings twice! I love this family and the storyline like no other!!! I can not wait for more! And the way the ranch sounds I need that spa or dude ranch built!!!

I loved this book! The characters were fun and the premise was whimsical. The best part is that there are several brothers, so I see many more books in this series in the future!! A cute twist at the end that I really enjoyed!

Austin & Lucy’s Romance Is A Sweet Story That Centers On Family, With A Few Laugh Out Loud Moments! Don’t Forget To Download The Free Bonus Epilogue In Austin’s POV Via The Link At The Back Of The Book.

This is the first book in a new series about the Hamilton family of Horseshoe Ranch in Bitterroot Valley, Montana. Ranger and Amelia Hamilton have been married for forty years, but they haven’t lost that spark. They quibble and argue, and have fun banter, but they are united in their love of family. Running a ranch is hard work, and keeping profitable is an ever-increasing challenge. They hope to have grandchildren to enjoy sooner rather than later, but none of their seven sons show signs taking the institution of marriage seriously. Amelia is feisty and independent, and much to her sons’ chagrin, she has stepped a little too far in trying to set them up. They are all headstrong and set in their ways, and though they love their mama, they are not about to give in to her shenanigans isn’t

The oldest is Beau, who works closely with Ranger to keep the ranch running and profitable. There are also Austin, Chet, Flint, Huck, and Knox. Wyatt is the baby of the family.

Book one, Accidental Mail Order Bride, is Austin and Lucy’s story. Beau and Olivia’s story follows in book two, Most Eligible Cowboy. Wyatt and Sadie have their friends-to-lovers story in His Favorite Cowgirl, book three.

Lucy Kensington, twenty-eight, needs some change in her life. She went through a rough year following her mother’s sudden death. Her father had never been in the picture, so it had always just been the two of them. She was born and raised in Brooklyn. Her mother was an artist – vibrant and full of life. Without her as a sounding board and her wise and encouraging words, Lucy is a bit lost. She has her best friend Olivia, but it is unfortunately not enough to erase the city full of memories of her mother. She had fallen for an Italian guy from Queens sometime before her mother’s death, but Lucy finally put an end to that relationship. Mikey had money, but he just wasn’t a good match. He hadn’t been too happy about the breakup, and in the aftermath, Lucy learned that he has ties with the mafia. His refusal to honor her wishes made Lucy all the more desperate to seek change, and the idea of leaving behind the only home she has ever known – and a city she loves – suddenly doesn’t seem so drastic.

When she sees an ad for a mail-order bride, Lucy is feeling particularly vulnerable. The notion is ridiculous in today’s day and age, yet it seems like a perfect opportunity. Lucy dreams of getting married and having a family, so she bites the bullet and answers the add. It turns out that the add was placed by the parents of the potential groom, who has no idea what his parents are up to. The more Lucy corresponds with the mother, the more she wants to be part of the family. Amelia is kind and friendly, and although nobody can replace Lucy’s mother, having such a wonderful mother-in-law, someone to be a grandmother to her children one day, would help to fill the empty void. In a leap of faith, Lucy leaves New York and catches a plane to Montana.

Things go astray when Lucy forgets to bring the address along. She stops at a bar and asks for directions, but leaves with more than an address. A handsome stranger captures her attention, and his magnetism has her almost speechless. His kiss blows her away. But Lucy is there for a reason, and she trusts Amelia, her future mother-in-law if all goes as planned. Beau is the oldest of seven sons and apparently the son intended for Lucy. When it turns out that Beau’s younger brother is Austin, the man who kissed her at the bar, her courtship with Beau suddenly becomes awkward. Lucy goes through a lot in this story, but she eventually earns a happy ending. Don’t’ forget to download the free bonus epilogue in Austin’s POV via the link at the back of the book.

Fans will be excited to read Beau and Wyatt’s upcoming stories. There are glimpses of the stories within this book.

Lucy immediately falls in love with Horseshoe Ranch and the Hamilton family. Finding her match, however, takes her some time. Lucy fears letting down Amelia, who had been so kind and supportive in inviting Lucy into their home. But Beau, like his brothers, is not invested in the idea of an arranged marriage. He does, however, agree to spend some time with Lucy, getting to know her. Meanwhile, Austin lurks in the background, happy to sneak a little time with Lucy here and there, reminding her of the kiss they shared. Despite his difficult disposition and moodiness, Lucy finds herself crushing on him. But Austin isn’t interested in marriage, so keeping him at bay and giving Beau the chance to build a connection with her is the safest route, not to mention the choice that would most please Amelia. As Lucy gets deeper and deeper, though, she risks losing everything.

Austin and Lucy’s romance is a sweet story that centers on family, with a few laugh-out-loud moments. The seven Hamilton sons love their mama and it shows. She plays the role of matchmaker here, but then she sits back and lets nature take its course. The story is nicely written. There are several edits in my ARC version which I assume are cleaned in the final copy. The plot is fairly simple. The characters are light and entertaining. Lucy is perhaps a little too ditzy in the beginning, but she improves. The story is written in first person in Lucy’s POV. I rate this book four stars.

I received an advance copy of this book and am voluntarily leaving a review.