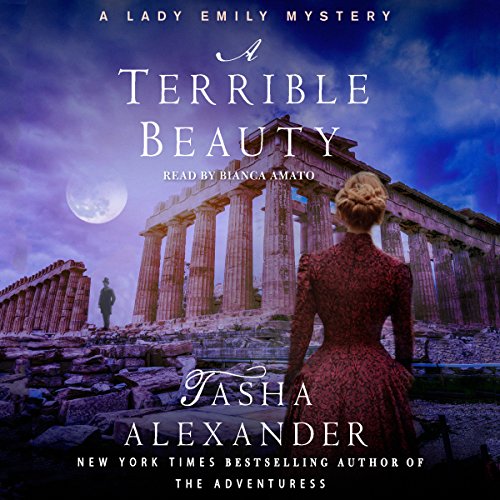 In this gripping new audiobook in the New York Times best-selling series, Lady Emily travels to Greece, where a ghost from her past returns to haunt her amid the ruins.

On a quest to distract her lifelong friend Jeremy from his recent heartbreak, Lady Emily organizes a holiday in Greece. As a lover of all things Greek, she quickly finds herself occupied with tours of ancient ruins; lively debates with Margaret, a devoted Latinist; and slightly more scandalous endeavors with her dashing husband, Colin Hargreaves.

But the pleasantries are brought to an abrupt halt when a man long believed dead greets the party at their island villa. Lord Philip Ashton, Colin's childhood best friend and Emily's first husband, has returned. But can Philip really be who he claims, even if he has the scars and stories to prove it? Where has he been all this time? And will his undying love for Emily drive him to claim what's his?

Intrigue mounts as Philip reveals that he has been plagued for the past few years by an illegal antiques trader who believes he is in possession of a piece of Achilles' helmet, a priceless relic that was stolen from him moments after he unearthed it on an archaeological dig. Emily must employ all of her cunning and expertise to thwart thieves who threaten not only her own safety but that of those precious artifacts she holds so dear. A trail of overheard conversations, murderous assailants, and dead bodies leads her on a chase to uncover more than one buried truth.

I feel deceived not about the story though

I am a very big fan of Bianca Amato. I have literally listened to books just because she has narrated them. It's how I found the lady Emily series to begin with. However, I do not believe this book was narrated by her. There were some similarities along the way but overall there's no way this is the same person I've been listening to on all these other books.

I loved this story and the narrator, who is not Bianca Amato, did well. The editing, however, left something to be desired. There were long gaps where the narrator had paused and areas where you can possibly hear where there was a splice. Haven't had this problem with earlier books, so hopefully it's anomaly.

If you could sum up A Terrible Beauty in three words, what would they be?

What other book might you compare A Terrible Beauty to and why?

This book follows the style of Tasha's earlier books in a very welcome manner.

Who would you have cast as narrator instead of Bianca Amato?

Orlagh Cassidy. The performance of Bianca Amato was full of odd gaps and pauses in the wrong location in a sentence or thought. These mistimed gaps caused the meaning to be initially blurred. Very noticeable and increasingly annoying.

I have read and enjoyed everything else in this series but this was disappointing. The plot was contrived and unsatisfying

A bit over the top

Would you try another book from Tasha Alexander and/or Bianca Amato?

Yes, I would read another book by Tasha Alexander.

Would you be willing to try another book from Tasha Alexander? Why or why not?

Yes, I liked many of the Lady Emily series, this is not a favorite.

Would you listen to another book narrated by Bianca Amato?

To be honest, not so much.

Do you think A Terrible Beauty needs a follow-up book? Why or why not?

Since it is a series, yes.

I could not get into the story, it was a bit much for me in its closeness to romance novels.

Sorry, but I have listened to every book in the series and this story was not intriguing or interesting to me.

Bogs down in details about Greek history

The Lady Emily Series is great and I've really enjoyed them but this book really dropped the ball. There was a fabulous opportunity to make this storyline really great but instead there are pages and pages of Greek history in between the action. I'm very disappointed and I don't think I'll read another Lady Emily story.

I Don’t Read For This Reason

I Love Tasha Alexander’s other books so this one was a rude disappointment. So Jones didn’t want to interfere with their lives? So why does he hunt them. And force himself on them. And extreme passive aggressive. Just made me angry. I don’t read for that. There are enough passive aggressive people in the world that I’m forced to deal with. I’ll be sending this one back.

I really enjoy the Lady Emily series! I usually read them as summer and night time reads
in between more serious or challenging novels. I have to say that I was a little disappointed in the editing of this particular piece, a few dead seconds in the middle of paragraphs and sentences, but I Really like the reader!