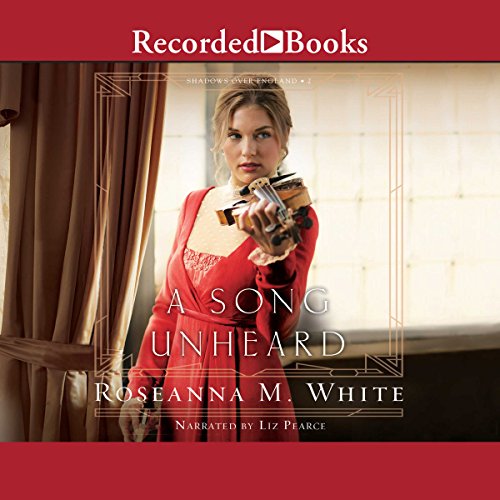 At the outset of WWI, high-end thief Willa Forsythe is hired to steal a cypher from famous violinist Lukas De Wilde. Given the value of his father's work as a cryptologist, Lukas fears for his family and doesn't know who to trust. He likes Willa - and the feeling is mutual. But if Willa doesn't betray him as planned, her own family will pay the price.

Willa Forsythe is both a violin prodigy and top-notch thief, which makes her the perfect choice for a crucial task at the outset of World War I - to steal a cypher from a famous violinist currently in Wales.

Lukas De Wilde has enjoyed the life of fame he's won - until now, when being recognized nearly gets him killed. Everyone wants the key to his father's work as a cryptologist. And Lukas fears that his mother and sister, who have vanished in the wake of the German invasion of Belgium, will pay the price. The only light he finds is meeting the intriguing Willa Forsythe.

But danger presses in from every side, and Willa knows what Lukas doesn't - that she must betray him and find that cypher, or her own family will pay the price as surely as his has.

Enjoyed this book even more than “A Name Unknown” and thoroughly enjoyed it.
I love Roseanna White’s writing and purposely look for Liz Pearce’s narration, she is excellent- makes the characters come alive.

The duet of White and Pearce are unbeatable. The story becomes real from the very first paragraph and keeps you hooked until "the end". Love these characters, the story, the suspense, mystery, humor and romance. Well done again!

This author writes terrific stories without dragging things on or using a sappy, childish style of romance. But this narrator is astounding! Great voice and acting, and an amazing skill to do so many accents well!

Oh how I love this series! This simply cannot be the end...we need a story about Barclay and the rest. I said it about A Name Unknown, SO Clever and witty, and so beautiful. And The Lord running like a thread throughout the whole thing. I really like the imperfections of the people in The Family and their tenacity and love for each other. And Liz Pearce brings it all to life! II usually like the voices of the characters in my own head when I read a book, but honestly, the experience could not have even come close to how Liz reads this. Brava Liz Pearce! Please Roseanna M. White, give us more!

Excellent in every way.

Excellent in every way. The author moved you along with mystery, suspense and romance with music at the center and war in the background. Narrator did a fantastic job.

loved the story. and the narrator was the best I have ever heard. She was remarkable with the voices.

There are not words enough to express how much I loved this book. I loved Willa! A strong woman with a moral code, even though she was a thief. I loved her gift of music, I could almost hear it as she played. I also loved how she captured the heart of "rake" Lukas De Wilde. The dialogue between them is brilliant!
Margot is a wonderful character too. I loved the family, not by blood but still family.
Roseanna M. White has written a wonderful story filled with intriguing characters, some suspense, danger, and a bit of love. I recommend this book as well as A Name Unknown.
The narrator is fantastic! I can't wait for more!

Author and Narrator, the FANTASTIC duo!

I have either read, read/listened to, or just listened to Roseanne White's books, and have loved every one! I ABSOLUTELY cannot imagine her stories brought to life by any other narrator than Liz Pierce. She invokes the same emotions that I would if I were reading the books myself. I cannot wait for the next of this series (please say there will be one!)!

World War I novel of hardship, courage and beauty

Narrator Liz Pearce does a spectacular job changing accents for Roseanna White's characters. English, French, Flemish, and German come across seamlessly in this wonderful book set in Europe at the beginning of World War I

Love between "family" members thrives among the 12 street orphans as the older take care of the younger.

The violin prodigy in the "family", Willa, brings her pickpocketing skills, the beauty of music, and eventually love for another musician to enrich the story.

Having read and enjoyed about another of the "family" in A Name Unknown, I will be watching for Audible to produce another.

Loved the book. well written and fun. the end seemed a little rushed, but still worth it!