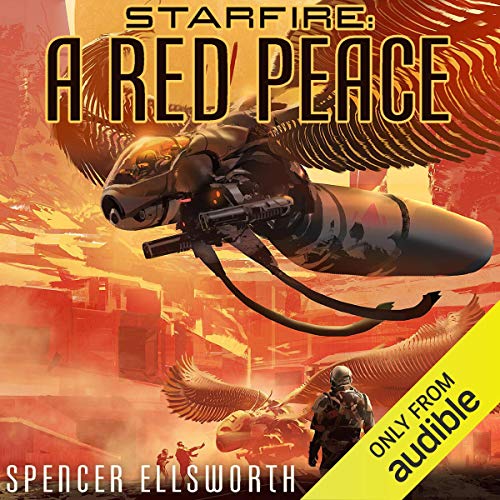 A Red Peace, first in Spencer Ellsworth's Starfire trilogy, is an action-packed space opera in a universe where the oppressed half-Jorian crosses have risen up to supplant humanity and dominate the galaxy.

Half-breed human star navigator Jaqi, working the edges of human-settled space on contract to whoever will hire her, stumbles into possession of an artifact that the leader of the Rebellion wants desperately enough to send his personal guard after. An interstellar empire and the fate of the remnant of humanity hang in the balance.

Spencer Ellsworth has written a classic space opera, with space battles between giant bugs, sun-size spiders, planets of cyborgs, and a heroine with enough grit to bring down the galaxy's newest warlord.

Fantastic! Leaves you wanting more. Every page is filled with a fast-paced Sci-Fi adventure giving you only paragraphs to catch your breath. Memorable and relatable characters all with their own personal quirks and imperfections. Midway through Ellsworth begins to introduce you to the mythology of Starfire; something I just could not get enough of. I am excited to discover more in the next two books. Much like a very enjoyable movie prompting multiple views, A Red Peace is easily approachable for multiple reads. (which is exactly what I am about to do! Round 2!)

Keating and Kowal both gave fantastic vocal performances, truly embracing the voices of both distinct characters.

Listening to the space opera, A Red Peace by Spencer Ellsworth took me back to the Speculative Fiction college course taught by Professor Tull. Our reading list had some fantastic short stories from the early days of sci-fi and A Red Peace was reminiscent of those classic works. And I mean that in a very good way.

The story is told from the perspective of two cross-bred humans: Jaqi, narrated by Mary Robinette Kowal and Araskar, narrated by John Keating. Araska is vat-born and Jaqi is the daughter of two vat-born cross-bred humans. Crossbreeds were manufactured specifically to be soldiers. The war Araska has been fighting has just ended but both he and Jaqi are immediately pulled into political intrigue involving an alien artifact. There are cyborgs called “Suits” and insect type aliens and all the technology and violence that goes with the aftermath of a galactic war.

The narration was a bit jarring at first with a posh sounding Keating reading as Araskar and Kowal narrating as Jaqi, with a Southern down-home country girl drawl. If this difference in voices throws you off at first, just stick with it. This is a well-told space opera that will stick with you after.

I had a difficult time with Keating’s narration in that I couldn’t always tell the characters apart. I could tell he was using a slightly different voice for each character but they weren’t consistent at first as they weren’t always distinguishable. Kowal’s alien voices were very harsh and I couldn’t understand what was said in one exchange. By the end, I couldn’t imagine Z sounding any different then Kowal’s harsh but cool interpretation. After finishing this first book, I’m still not sure what I think of Keating’s narration but I really like Kowal’s lively voices. That’s a bit of a change for me as in the past I’ve preferred male narrators.

A Red Peace is book one in the trilogy but it’s not really a stand-alone and the ending is a bit abrupt (probably because I was really getting into the story!) so be prepared to immediately want the second book in the series.

If you keep track of this sort of thing, there is mild profanity and sex is alluded to.

Please find this complete review and many others at my review blog.
[If this review helped, please press YES. Thanks!]

Strange little story that got better and better!

Great story that started out a bit odd but then grabbed my attention and would not let go!

What a fun ride!

This book never stops going! I love the originality of the world building and the character's voices. I can't wait to find out what happens next in the series.

This is a well-written and superbly narrated first book in a high-concept space opera/sword-and-laser trilogy.

The recipe for Ellsworth's universe is a little bit Star Wars, a dash of Warhammer 40K, and a healthy portion of Simon R. Green's Deathstalker books. Although the tropes Ellsworth plays with in his inaugural novel are rather familiar to the fans of the genre, he spins an entertaining yarn that never outstays its welcome.

Will definitely listen to the sequel.

Great characters, great story and excellent writing make this an excellent space opera; the performance is the cherry-in-top. If you like science fiction, I strongly recommend this book.

I cannot write a good enough review of this book! The characters are wonderful. The storyline is very interesting. The writing is beautiful and gripping all at the same time.

I look forward to the rest of the trilogy!!