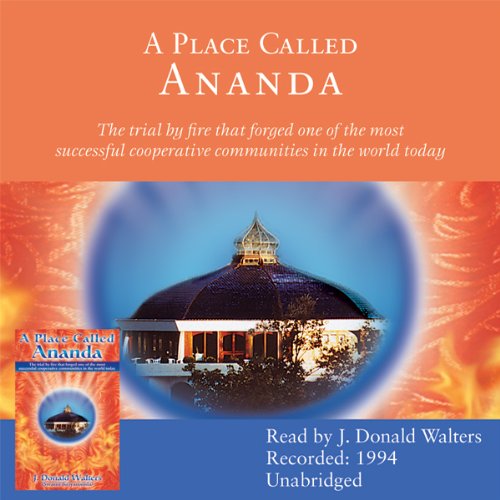 This book shows that small communities of individuals seeking a new way of living can provide a model for the present age. A Place Called Ananda is dedicated to all those who want inner freedom. It proves that such freedom is attainable. Little groups of individuals can accomplish what large social groups have never been able to achieve.

The story of Ananda begins simply: Swami Kriyananda only wanted to serve an organization to which he had dedicated more than a decade of his life. He believed in it deeply. However, he would not endlessly compromise his belief. And so he found himself in conflict with his superiors. "My institution, right or wrong," was never his motto. Truth, not institutional priorities, was his guide.

This book tells the age-old story of institutional demands versus individual conscience. It will be familiar to anyone who has had dealings with governments and with large corporations of all kinds: economic, educational, religious. In physics, the electron is considered the key to the universe. So also in human affairs: The key to society is the individual. When individuality is respected, society flourishes. When it is ignored, society stagnates and becomes paralyzed.

Kriyananda describes the painful journey that led to his founding of a new concept in living: Ananda, whose guiding motto is, "People are more important than things."

This story is told with courage and with charity - from the years spent under the great spiritual master Paramhansa Yogananda to years in India, to San Francisco during the 'sixties (era of hippies, the drug culture, the "Hare Krishnas" and Bhaktivedanta, the American Zen movement) and his own encounters with some of the leading figures of the day, to the community he gradually evolved.

The Ananda communities, in their history of over 40 years, have demonstrated that attitudes of kindness, sharing, and cooperation actually work. Ananda is a meaningful alternative to greed and cutthroat competiti...

"One of the leading lights in the spiritual world today...an inspiration to us all." (Lama Surya Das, author of Awakening the Buddha Within: Eight Steps to Enlightenment)

Swami Kriyananda is a joy to listen to. His voice gives the impression you are sharing a conversation. Ananda is an amazing community. I loved to know more about how it came about. I was impressed with all the obstacles they faced.