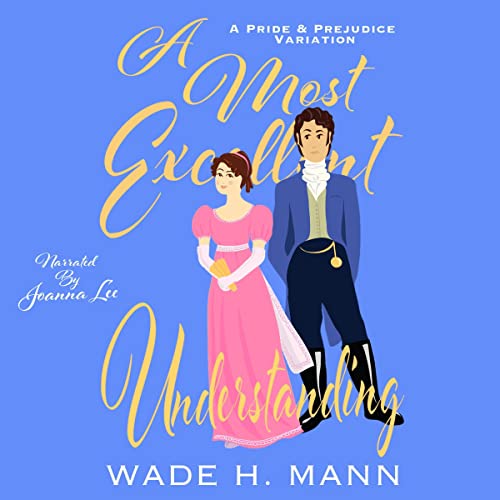 A Most Excellent Understanding

The first time I rejected a proposal of marriage, my suitor would not take "no" for an answer, so I have resolved to be more forceful in any future ones.

Elizabeth Bennet is a lady of decided opinions—especially about a certain Mr Darcy. When Colonel Fitzwilliam reveals that gentleman as the cause of her sister’s romantic woes, Elizabeth does not become angry or distraught. Instead, the news offers some relief, because it allows her to finally understand everything that happened in Hertfordshire the previous autumn. With this new knowledge, she acts to remove herself from the disagreeable company at Rosings.

Fitzwilliam Darcy finds himself thoroughly confused by Elizabeth’s abrupt departure on the very day he thought to propose. Surprisingly, his cousin is reluctant to offer enlightenment as Darcy pursues Elizabeth to London, where he encounters a less than forgiving pair of Bennet sisters. Darcy must overcome his own reserve to explain himself, which is not easy as others require their share of conversation—especially as it concerns the Bingleys and any future alliance between Darcy and Elizabeth.

In this hard-fought battle of wits, can Darcy find the words to prove himself worthy of Elizabeth’s good opinion and win her heart, or will she remain firm in her most decided opinion of the master of Pemberley?

I loved the narration as she brought the story to life.
Elizabeth’s decision to leave Rosing park with the help of Lady Catherine prior to canon. Colonel Fitzwilliams enlightening conversation with Miss Elizabeth brings so many changes to the story. Darcy learns the truth and takes steps to change.
This is a story not to miss.

Everything that a JAFF audiobook aught to be

Clever, funny and romantic with very little angst. Jane, Anne and Lady Catherine evolve into much more intelligent and likable characters. Caroline gets what she deserves and Bingley is encouraged to become a better man. Miscommunication between ODC is identified early on so that we get lots of time watching their love story evolve. Lovely, extended wrap up feels quite as it should.

The author does a good job of taking gentle deviations that lead to big changes down the road, with humor and wit.

A really fun story but….

This is a very cute and fun story. I first read it on kindle unlimited. So I was excited to see the audiobook… but… I’m sorry to say in my opinion the narrator doesn’t fit the story. The narrator reads well and can handle multiple characters but… has a more abrasive voice than I’m used to hearing in jaff books and it is a little hard to concentrate on the story. I’m trying not to be mean about it, she truly does read well but Elizabeth doesn’t sound like a gentlewoman, she sounds more like Mrs. Bennett or Mrs. Phillips, if you get my point. I think her voice suits more to modern stories over regency/Georgian.

I couldn’t finish the book. The narrator’s voice was so difficult to listen to. Pitch and tone of her voice got in the way of the words.

No offense to the author but the characters are too far from the original cast to be pleasurable. The narrator has an older woman sounding voice which is distracting to me.

Loved the Dialogue and Character Changes

Great variation! The writing was very witty and entertaining especially Elizabeth’s character. I enjoyed the change in the personalities of Jane, Georgiana and Lady Catherine. I loved the collaboration of the foursome of Darcy, Elizabeth, Jane and the Colonel.

This was a different variation of P&P. I like how Elizabeth managed Lady Catherine and how Jane stepped up against Caroline Bingley. Great Jaff