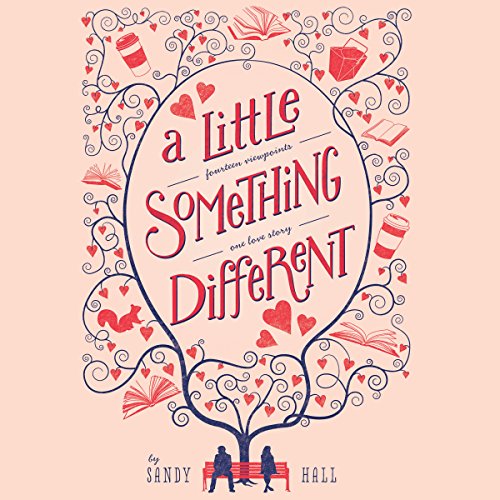 A Little Something Different

The creative writing teacher, the delivery guy, the local Starbucks baristas, his best friend, her roommate, and the squirrel in the park all have one thing in common - they believe that Gabe and Lea should get together.

Lea and Gabe are in the same creative writing class. They get the same pop culture references, order the same Chinese food, and hang out in the same places. Unfortunately, Lea is reserved, Gabe has issues, and despite their initial mutual crush, it looks like they are never going to work things out.

But somehow even when nothing is going on, something is happening between them, and everyone can see it. You'll be rooting for Gabe and Lea, too, in Sandy Hall's quirky, completely original novel A Little Something Different, chosen by readers, writers, and publishers to be the debut titles for the new Swoon Reads imprint!

Every few years a new wave of storytelling washes in. We've read paranormal romances; dystopian fare; and the John Green first person angsty influence. Publishing houses are now looking for something a little different and this fits the bill. Instead of hearing from our main characters, at least 10 narrators (I lost count) tell the story of Gabe and Lea, two college students destined for a relationship. They never speak directly to each other.

It's a little confusing at first to keep track, but you can see why they were chosen. To move the couple around campus, you needed the waitress, Starbucks barista, bus driver, teacher, and friends. A few could have been cut out, for example the squirrel. Yes, I did say squirrel.

While this book didn't blow me away story-wise and I wasn't completely invested in why Lea and Gabe were a good fit, I was impressed with Hall's technique. Clever idea and an interesting read just to see how she pulls it off. Be on the lookout for more like this, especially third person POVs.

It IS different and an enjoyable listen

A Little Something Different lives up to its name. A romance told from everyone's point of view EXCEPT the two involved in the romance was different enough for me to give it a try. I don't know that it necessarily worked for me. The writing is crisp and the characters interesting, but I just never felt invested in Gabe and Lea's relationship. I couldn't even figure out why anyone else, other than the best friend and brother, cared either. Maybe it's because I never got their point of view, that I never really connected with either of them.

And while neither Gabe nor Lea is particularly all that likeable, the rest of the cast, those who narrate the story of Gabe and Lea, were so interesting, I couldn't help but continue on. I listened to the audiobook and it's narrated by two different voiceover actors. I thought Will Damron did a great job. He had a wonderful way of inflecting the different personalities into each of his characters. But Amy Rubinate sounded the same with every point of view. To me, they all sounded like Inga.

Plot
The plot isn't all that complex and there isn't really a lot of character growth, and yet it's an enjoyable read/listen. The plot is the love story between Gabe and Lea as told by everyone around them. Gabe is painfully shy and awkward and Lea is odd and reserved. It's basically a match made to fail, and yet through the help of overly-interested third parties, they manage to get together enough to talk and allow a weird romance to sort of bud, wither on the vine, and slowly eek out an existence.

Characters
The characters are what make this book worth reading. Not Gabe and Lea, but the others. First there is "Call me Inga," the overly-invested creative writing teacher with an obsession, bordering on psychotic, for getting these two together. She likes to play matchmaker with a different set of students every semester, and this year she's decided Gabe and Lea are her "it" couple.

Then there's Victor, the reluctant creative writing classmate. He's witty, hysterical, and easily my favorite character. Charlotte is the glib Starbucks barista with a chip on her shoulder. I was really pulling for Victor and Charlotte to get together in the end. There's also Inga's wife, a bus driver, Gabe's brother, Sam, who I also adored, Casey, Gabe's best friend, and Lea's roommate, Maribelle. There's also the bench and the squirrel, but neither of those POVs added anything to plot or characterization, so I'm not even sure why they were included.

World Building
There is little to no world building. It's a generic college campus in a generic town that gets cold and snows in the winter, and there's very little scene setting. I don't know that it needs much in the way of world building, but I would have liked a little more environmental descriptions of the various settings.

Top Five Things I Enjoyed About A Little Something Different
1. The variety. The various points of view were a riot and made the story more interesting.

2. Victor. Absolutely loved Victor. When he talked about wanting to jab a fork in his eye, I laughed out loud.

3. Charlotte. Her acerbic wit made her one of the more memorable narrators.

4. Sam. He is such a loyal, caring brother, but still a totally cool dude. I would have loved a little Sam/Maribelle romance.

5. Will Damron's narration. He does a great job differentiating the character voices.

Bottom Line
A Little Something Different is different and an enjoyable read. It's not deep or thought-provoking, but if you're looking for some light entertainment, it hits the spot.

Fitting title... this book is a little different

What did you love best about A Little Something Different?

It was a little hearted, fun, easy read. It brought me back to my single college days.

What does Will Damron and Amy Rubinate bring to the story that you wouldn’t experience if you just read the book?

The narration was wonderful. The accents and dialects they used really brought the story to life!