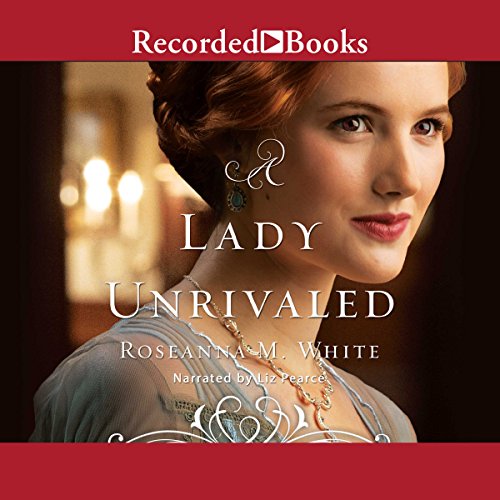 Lady Ella Myerston knows of the danger that haunts her brother, and she intends to put an end to it. While visiting her friend Brook, the true owner of the Fire Eyes diamonds, Ella accidentally gets entangled in an attempt to blackmail the dashing, newly reformed Lord Cayton. Will she become the next casualty of the alleged curse?

Lady Ella Myerston can always find a reason to smile - even if it's just in hope that tomorrow will be better than today. All her life everyone has tried to protect her from the realities of the world, but Ella knows very well the danger that has haunted her brother and their friend, and she won't wait for it to strike again. She intends to take action, and if that happens to involve an adventurous trip to the Cotswolds, then so much the better.

Lord Cayton has already broken two hearts, including that of his first wife, who died before he could convince himself to love her. Now he's determined to live a better life. But that proves complicated when old friends arrive on the scene and try to threaten him into a life of crime. He does his best to remove the intriguing Lady Ella from danger, but the stubborn girl won't budge. How else can he redeem himself, though, but by saving her - and his daughter - from those dangerous people who seem ready to destroy them all?

I grew up reading Grace Livingston Hill, even though she was from a generation 40 years ahead of head me. My grandmother introduced her to me.
Roseanna M White is a Ms Hill for the current generation. Full of faith, Gods love, fun, mystery and true love between a man and woman.
I have loved every book I’ve read so far.
Liz Pearce is one of the best narrators I’ve heard. Her tonal inflections and abilities to give the characters different voices the same familiarity in every book is wonderful
Thank you.

Would you consider the audio edition of A Lady Unrivaled to be better than the print version?

While I haven't read the text completely, I did listen to the entire audio edition. I love the way the narration immerses me in the story. At times, I would listen to the audio while reading the text. I would have to say that the audio edition is every bit as good as the print version and for me just a little bit better.

I adored Lady Ella. She was so overly positive that her few moments of irritation and frustration were very entertaining.

What does Liz Pearce bring to the story that you wouldn’t experience if you just read the book?

Liz Pearce gives each character a unique voice and I love her accents. Since so many of the characters have distinct accents, it made it all the more enjoyable.

I laughed aloud many times while listening to this audio edition. I also found myself wanting to yell at the characters when they were being particularly dense or obtuse.

This is the first one I have struggled with finishing. I started over to see if I missed something and still struggled. I like most of her stories.

Love the story! So many twists and turns but somethings were predictable, which I liked. Roseanna M. White can weave a tale to where you don't want to come back from and Liz Pearce can tell/read the story like no other. Her ability to get the different accents from Scottish to Russian to Irish is delightful.

My favorite character of the series

I love the story telling and plot in this whole series. The author has a gift and talent for bringing in new characters and blending them well with those we met in the first book 📖. I hope fingers crossed 🤞🏻 another book is in the works. 🤓

Very enjoyable series. Performance was exceptional. Thank you to the author and narrator for sharing you talents.

A perfect blend of intrigue and love

well written and researched. an excellent conclusion to the series.
excellent production as well.
thank you!

This wrapped it up!

I loved getting to know Cayton and Ella better. As well as all the little ones, some newcomers, and some more beloved servants.
One of the things I loved best about this particular installment of this Ladies of the Manor series is the redemption of so many hearts, souls, & lives. Things were not always as they seemed, and Roseanna M. White wrote those revelations convincingly.
Liz Pearce, the narrator, has impressed her name upon my memory due to her incredible performance throughout this series, though I did find myself confused a few times in this story as to whom was speaking. It is no wonder, though, with so many characters converging from all 3 stories, and some Russian added to the mix!
All in all, I enjoyed this series. This final installment was not my favorite, due to the necessary evils, but there could have been many more & I'm thankful for all the good that prevailed!
I will gladly read any and all novels crafted by Roseanna M. White! (I especially love A Heart's Revolution, and the Culper Ring Series!)

In this book and the other two in the series the author has woven together deep characters,intrigue,romance,history and a wonderful story. The three stories together would make a great mini series! Enjoyed very much and the narration is excellent.