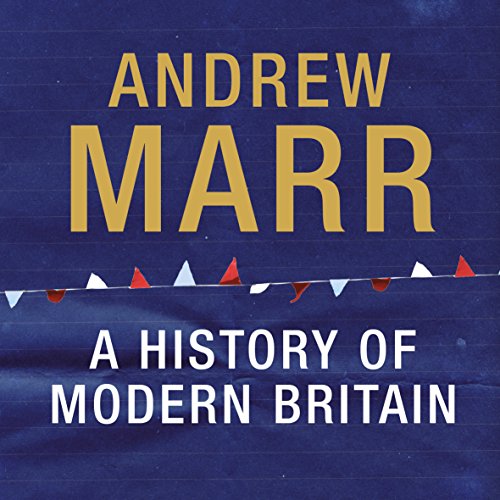 A History of Modern Britain

A History of Modern Britain confronts head-on the victory of shopping over politics. It tells the story of how the great political visions of New Jerusalem or a second Elizabethan Age, rival idealisms, came to be defeated by a culture of consumerism, celebrity and self-gratification.

In each decade political leaders think they know what they are doing but find themselves confounded. Every time the British people turn out to be stroppier and harder to herd than predicted.

Throughout, Britain is a country on the edge - first of invasion, then of bankruptcy, then on the vulnerable front line of the Cold War and later in the forefront of the great opening up of capital and migration now reshaping the world.

This history follows all the political and economic stories but deals too with comedy, cars, the war against homosexuals, '60s anarchists, oil men and punks, Margaret Thatcher's wonderful good luck, political lies and the true heroes of British theatre.

"Superb, colourful, outspoken, fresh and richly entertaining. Don't miss." ( The Times)
"Lively, full of rich anecdotes and sparkling pen portraits. He has the rare gift of being able to explain complex issues in a few crisp sentences." ( Sunday Telegraph)

I have gone back over postwar USA history lately through several books, and this British one is a great match. In audio, I always look for a balance between good sharp telling detail, listenable pace and style, well-etched personality portraits, and good narrator performance. This one hit the mark perfectly, all the way through. The narrator has a great gift (at the top of any I've ever heard) for lending enough clarity, unflagging energy and punch to keep the listener's attention bright. I feel most all the gaps in my sketchy knowledge are filled, and I feel as if I was living through each phase of these times. The experiences of all members of society are touched on when fitting, though the focus is naturally much more on the top political decision makers. Of the latter, the portrayals are fantastic. Foibles and scandals are explained, though not for voyeurism's sake, and only when they count for something. There is enough popular culture to lend color to it all -- just enough to enrich, to add dimensions, and not distract. The publisher's blurb hardly does justice to the wide sweep and discipline of the storytelling. Yes, a transition toward a "shopping"-biased political economy is one thread here, but there is a vastly rich tapestry besides. For its length, this one has held my attention best of any I can recall. And I listen to hundreds. For the most recent Brit story, I see other titles I will now pursue confidently, with the very solid background I gained here.