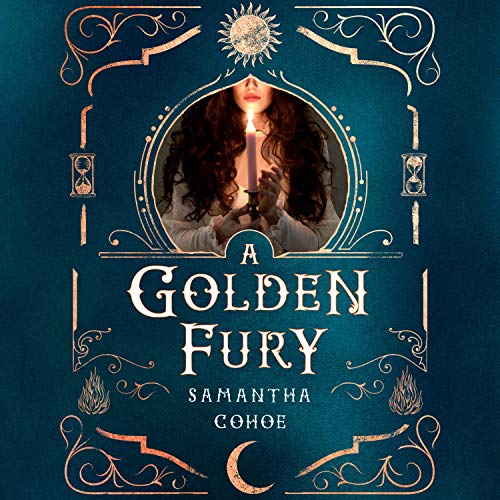 "Cohoe transmutes the legend of the Philosopher's Stone into a dark, intoxicating tale of ambition, obsession, and sacrifice. Prepare for a magic that will consume you." (Rosamund Hodge, New York Times best-selling author of Cruel Beauty and Bright Smoke, Cold Fire)

In her debut novel A Golden Fury, Samantha Cohoe weaves a story of magic and danger, where the curse of the Philosopher’s Stone will haunt you long after the final chapter.

Thea Hope longs to be an alchemist out of the shadow of her famous mother. The two of them are close to creating the legendary Philosopher’s Stone - whose properties include immortality and can turn any metal into gold - but just when the promise of the Stone’s riches is in their grasp, Thea’s mother destroys the Stone in a sudden fit of violent madness.

While combing through her mother’s notes, Thea learns that there’s a curse on the Stone that causes anyone who tries to make it to lose their sanity. With the threat of a revolution looming, Thea is sent to live with the father who doesn’t know she exists.

But there are alchemists after the Stone who don’t believe Thea’s warning about the curse - instead, they’ll stop at nothing to steal Thea’s knowledge of how to create the Stone. But Thea can only run for so long, and soon she will have to choose: Create the Stone and sacrifice her sanity or let the people she loves die.

"A Golden Fury is beguiling and unpredictable. Cohoe weaves an international adventure set against a rich historical backdrop, and alchemist Thea faces adversaries both human and magical with wit and grit. A compelling debut from a writer to watch." (Hannah Capin, author of Foul Is Fair and The Dead Queens Club)

"I adore Thea - her fierce ambition, her intelligence, and the warmth she so desperately wants to share with someone worthy. This is an alchemical wonder of a book. It takes all the elements of a good story - mystery, magic, devastating stakes, compelling relationships and impossible choices - and weaves them into pure gold." (Catherine Egan, author of Julia Unbound)

"Alchemists used many methods to hide their secrets, but Cohoe has deciphered their riddles - and uncovered a truth far darker and more complex than a miraculous rock. She lures you in with a promise of gold, then delivers something far more valuable: an intricate tale of ambition and sacrifice, loyalty and betrayal, the quest for knowledge and the wisdom to use it correctly." (Marie Brennan, author of The Memoirs of Lady Trent)

Transmuted my expectations into gold!

My initial interest in Ms. Cohoe's book primarily revolved around the alchemy and philosopher's stone elements. What shocked me was how quickly and utterly she sucked me into Thea's world and how invested I became in the brilliant alchemist's fate. The alchemy, philosopher's stone, and historical elements were accurate and immersive. It is rare to find such captivating content interwoven with such beautiful prose. The dialogue, setting, relationships, and stakes combined to tell the most compelling story I've read this year. Ms. Cohoe's book has transmuted my expectations into gold. What a brilliant start for a debut. I can't wait to see what other objects of wonder Ms. Cohoe creates with her alchemy.