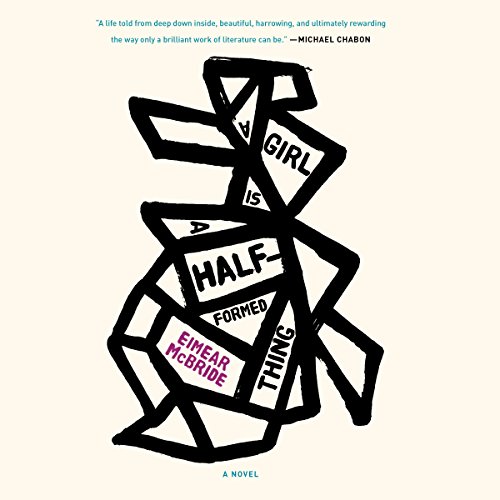 A Girl Is a Half-Formed Thing

A Girl Is a Half-Formed Thing

The dazzling, fearless debut novel that the New York Times hails as "a future classic".

In scathing, furious, unforgettable prose, Eimear McBride tells the story of a young girl's devastating adolescence as she and her brother, who suffers from a brain tumor, struggle for a semblance of normalcy in the shadow of sexual abuse, denial, and chaos at home. Plunging listeners inside the psyche of a girl isolated by her own dangerously confusing sexuality, pervading guilt, and unrelenting trauma, McBride's writing carries echoes of Joyce, O'Brien, and Woolf.

A Girl is a Half-formed Thing is a revelatory work of fiction, a novel that instantly takes its place in the canon.

"For all its experiments with form, the events of A Girl Is a Half-formed Thing are easy for readers to follow - McBride's great skill is in communicating a clear story through a complicated use of language.... A remarkable book.... Her language is artfully deranged to make familiar experiences strange and new but in that derangement there is vitality, even joy. The desolation of the tale is held in a gripping tension with the richness of the telling...McBride is pushing further even than Beckett did into what he called 'the syntax of weakness.' Her very words have holes in them." (The New York Review of Books)

"That this deliberately stunted narrative language retains its power past the girl's childhood and into her adult years is a testament to McBride's verbal dexterity and tight narrative focus.... A heartbreaking but stunning read, a portrait of suffering barely visible under cloudy water." ( Chicago Tribune)
"Shattering.... Be prepared to be blown away by this raw, visceral, brutally intense neomodernist first novel.... ( NPR)

Tough, disturbing but a future classic?

This award winning debut novel is fascinating but not for the faint of heart. McBride relates the Girls's story of her relationship with her brother, victim of a childhood brain tumor, her fanatically religious, Irish Catholic mother, and her Uncle who rapes and deflowers her at age 13 - all contributing to a warped, distorted sexual identity. Most fascinating is the prose or lack of it. The Girl's stream of consciousness style monologue is as fractured and broken as her psyche and requires the reader's patience throughout to glean the sense of it. But McBride
uses this language of splintered thoughts and feelings most effectively, creating a visceral reading experience. Her style invites comparisons to Joyce, and Faulkner as well as the interior searching of Virginia Woolf. Well worth the effort.

This is not a traditional narrative. If there's something more intimate than first-person prose, this is it. Emotions need not be bound by subjects and predicates. Eimear McBride has achieved something remarkable here, and that is to impart the very soul of her protagonist within those of us fortunate enough to share in this journey, which is made all the better by her reading. Only the author knows the exact rhythm, the exact tone of these words, which might be frustrating on the page but are music in aural form. McBride has given us a precious gift.

Writing style not my cup of tea

The story could've really gone places. Instead nearly all the book focuses on is the narrators sexual escapism. My main issue with the book though, was the writers peculiar style. It's like tourrettes syndrome in print. Repetitive, swear words thrown in mid sentence for no reason, and non cohesive rambling from the narrator. I really had to power through it.

Some people really like the disjointed and completely disoriented and disorienting way this book is written. Unfortunately I really did not enjoy it. Also, the theme of insistent, never-ending violence was exhausting for me. Simply, not the kind of book I enjoy.

This is an incredible book. Challenging to read but takes on a totally new dimension when the author reads it.

Did not like the writing style and found the storyline disturbing, depressing and too graphic.