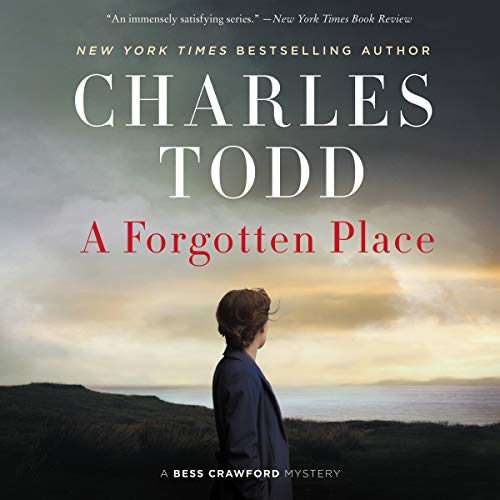 Though the Great War has ended, Bess Crawford finds herself caught in deadly circumstances on a remote Welsh headland in this 10th entry from the acclaimed New York Times best-selling author.

The fighting has ended, the Armistice signed, but the war has left wounds that are still agonizingly raw. Battlefield Nurse Bess Crawford has been assigned to a clinic for amputees, and the Welsh patients worry her. She does her best to help them, but it’s clear that they have nothing to go home to, in a valley where only the fit can work in the coal pits. When they are released, she fears that peace will do what war couldn’t - take their lives.

Their officer, Captain Williams, writes to describe their despair and his own at trying to save his men. Bess feels compelled to look into their situation, but the army and the clinic can do nothing. Requesting leave, she quietly travels to Wales and that bleak coal-mining village, but she is too late.

Captain Williams’ sister tells Bess he has left the valley. Bess is afraid he intends to kill himself. She follows him to an isolated, storm-battered peninsula - a harsh and forgotten place where secrets and death go hand in hand. Deserted by her frightened driver, Bess is stranded among strangers suspicious of outsiders. She quickly discovers these villagers are hiding something, and she’s learned too much to be allowed to leave. What’s more, no one in England knows where she is.

Why is there no constable out here? And who is the mysterious Ellen? Captain Williams and his brother’s widow are her only allies, and Bess must take care not to put them at risk as she tries to find answers. But there is a murderer here who is driven to kill again and again. And the next person in his sights is Simon Brandon, searching for Bess and unaware of his danger....

"This book's setting and narration provoke images of a PBS mystery series, with a bit of 'Downton Abbey' thrown in.... Narrator Rosalyn Landor gives Bess an upper-class accent and portrays her as unflappable, compassionate, and tough.... Both the writing and Landor's voice give wonderful animation to an admirable heroine." (AudioFile)

Writing and narration good. Story not so much

The arc of the story of Bess Crawford’s life and career have flattened out in this tale. It’s time to let the character go or recharge the story line. Don’t bother

Not the best Bess Crawford

Rosalyn Landon is the perfect Bess Crawford. The story certainly had its twist but took too long to get there. I was disappointed that Bess didn’t act in her usually intelligent manner by taking unnecessary and less than thoughtful chances.
Despite this , I will continue to follow this series. After all, even Mary Poppins was only “practically perfect “.

Not nearly as good as the previous book

At the end of this book, the authors tell us about the real-life events that inspired the story. That was much more interesting than the book itself. The narration of this book is very good, and what kept me listening to the end. I found the story itself preposterous, and the characters less than believable.

The Bess Crawford of previous books is highly intelligent, practical, and independent. Here, she behaves quite recklessly, running around in the middle of nowhere, often in the dark, asking for trouble. Her reason for heading off on this trip to a remote part of Wales in the first place is lame. She’s a young woman traveling alone in 1919, but she makes no arrangements for where or how she will stay there, and she tells no one where she is going. Hmm.

The writing itself is OK, but much of the detail in this book just seems to be filler with no purpose. The characters use a lot of hot water bottles!

I was also disappointed that this book didn’t move Bess’ personal life forward even a little bit.

There is some worthwhile stuff in the book, including what men who lost limbs faced when they returned after the Great War. And the descriptions of Wales were well done, especially what life was like in coal mining towns.

I have been waiting for this book and had it pre-ordered as I do all the Bess Crawford books. That practice may have ended with this book. The preceding book in the series should have been my last.

This book wasn't as much bad as it was disappointing. I found it boring and I found Bess totally unlikeable. Why did she take the risks she did? The situations were awkward, dangerous, and beyond my comprehension. Sad to say, I struggled to finish this. It was a chore.

The narration was decent. I've always enjoyed Rosalyn Landor but even her voice was a bit bland this time.

I have read all the Bess Crawford mysteries and was afraid that as the authors drew the war to an end that they would end this series. I am much relieved to see that Bess will go on still dealing with the wounded men of the war.
While this book takes a bit to get off the ground, once it starts to roll it is unstoppable and a wonderful read. Don’t miss it!!

Love all the other Charles Todd mysteries, but not this one. Just too sad and hopeless. People are locked in to greed, suspicion, and self-interest. Violence and murder are acceptable to them, to protect the deceits of the past.

Beautifully written if you can handle the intense gloom.

Not as good as all their previous books.

Plot was just not credible to me. Authors seemed to struggle to contrive this post-war mystery for Bess. Characters and actions were often not very believable. On the other hand, I did finish the book and the narrator was very good as always.

Loved it....sure kept you guessing who the killer was...really love this and Ian Rutledge series.

Well-developed characters and engaging story with fantastic narration. I'm looking forward to the next in the series.

This book is a little different than the others but very good. Hitchcock would’ve loved it. Highly recommended.