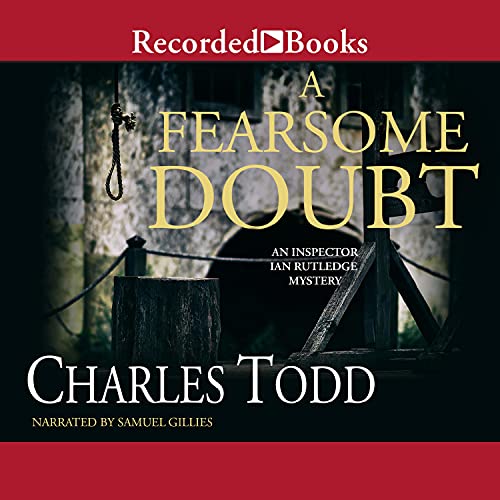 In 1912 Ian Rutledge watched as a man was condemned to hang for the murders of elderly women. Rutledge helped gather the evidence that sent Ben Shaw to the gallows. And when justice was done, Rutledge closed the door on the case. But Shaw was not easily forgotten. Now, seven years later, that grim trial returns in the form of Ben Shaw's widow Nell, bringing Rutledge evidence she is convinced will prove her husband's innocence. It's a belief fraught with peril, threatening both Rutledge's professional stature and his faith in his judgment. But there is a darker reason for Rutledge's reluctance. Murder brings him back to Kent where, days earlier, he'd glimpsed an all-too-familiar face beyond the leaping flames of a bonfire. Soon an unexpected encounter revives the end of his own war, as the country prepares for a somber commemoration on the anniversary of the Armistice. To battle the unsettled past and the haunted present at the same time is an appalling mandate.

And the people around him - Among them the attractive widow of a friend, a remarkable woman who survived the Great Indian Mutiny; a bitter, dying barrister; and a man whose name he never knew - unwittingly compete with the grieving Nell Shaw. They'll demand more than Rutledge can give, unaware that he is already carrying the burden of shell shock, and the voice of Hamish MacLeod, the soldier he was forced to execute in the war. The killer in Marling is surprisingly adept at escaping detection. And Ben Shaw's past is a tangle of unsettling secrets that may or may not be true. Rutledge must walk a tortuous line between two murderers...one reaching out to ruin him, the other driven to destroy him.

Does Ian Rutledge Ever Get a Grip?

Would you try another book from Charles Todd and/or Samuel Gillies?

I've listened to several, and after this one I'm done. Ian Rutledge is an emotional mess, not particularly brilliant as a detective, and the relentless misery he carries around with him is getting old. I get that he's suffering from shell shock and I don't want to seem heartless in my assessment of the character, but there's simply no change in him, from book to book. He isn't a satisfying character.

Would you ever listen to anything by Charles Todd again?

Probably not. In addition to my irritation with the Ian Rutledge character, I'm annoyed at the number of loose ends at the finish of each book. Things do not wrap up, and while that might seem like a creative approach, it's not what I look for in mysteries.

Have you listened to any of Samuel Gillies’s other performances before? How does this one compare?

He's wonderful. I would listen to him reading the phone book. I hope to hear more of his performances.He is a true professional.

Not as written, no.

Outstanding in every way!

I've read all the Ian Rutledge and the Bess Crawford series (by Charles Tood, mother/son team). Just finished a Bess Crawford book, so was pleased to find this Rutledge one just released.

Rutledge is a Scotland Yard detective, struggling to rebuild his life after the Great War, from which he was sent home wounded in body and soul. It's important to understand that as a result of shell shock and events that have left him emotionally depleted as a result of the war, he carries with him an inner reminder of a moral dilemma he was forced to face. He had to issue the command to execute a soldier who refused (also on moral grounds) to lead his troops into certain death. Rutledge now hears the voice of Hamish MacBeth wherever he goes, as a constant reminder of the unthinkable choices and decisions he had been forced to make. The voice of Hamish can be wise or tormenting, but it is ever present.

In this story, Rutledge is confronted with new evidence, strongly suggesting that a man he helped bring to the gallows some years ago might have been innocent. At the same time, he is sent away to investigate the murders of men who have returned from the war seriously wounded. He must discover who is doing this, even while trying to heal his own soul from the war, and come to terms with the possibility that he not only had to have a good and decent man executed in wartime, but might have contributed to the death of an innocent man through the judicial system before the war.

There is lightweight entertainment, then there is writing that moves to deeper levels. All of this series, but especially the earlier episodes, force the reader to examine deeper moral issues, and especially this book. Yes, this is a good police procedural, and the writing is superb as they create this conflicted, lonely man who struggles with his war past while taking on his duties at Scotland Yard.

But Chales Todd here pushes the reader (listener) to examine what it means to kill. There are the issues of criminals who murder for personal reasons. But this is contrasted with legal killing--the judicial system, where people might be wrongly executed, and war, where atrocities occur that exceed the mind's ability to handle.

This book is a simple book at one level--Scotland Yard doing their job. At a different level, this writing brings us into the time just after WWI in England, providing descriptive details that evoke the atmosphere of a country that made enormous sacrifices and was almost brought to it's knees, as it tries to regain life and strength to go on. The book does an excellent job of bringing to the reader the moral dilemmas of killing, murder, legal execution or war, through Rutledge's eyes as he struggles to make sense of the two cases he has been presented with.

This is a good book, and one where the writing flows well, and has very good narration by Samuel Gillies. I could never call this "light" reading, even though it is still remains a police procedural. The Bess Crawford series, while excellent and also always thought provoking, is lighter in presentation than the Rutledge series. I have read them all, and I find that they stay with me because these earlier books, especially, leave quite a lot to ponder. They are all among my very favorite series books. Highly recommend!

I say that because I thought it before. Waiting for the inevitable in this, I, now, am not as perplexed at the blunt endings, but it would be nice to have at least some loose ends tidied up in the next.

I can't keep dealing with the endings

Really, there are so many things that I have enjoyed about the books ... I have actually listened to 6 in a row ... but I just can not stand the cliff-hanger endings. No, that isn't right ... not exactly cliff-hanger, it is just that the books aren't finished ... it is as if the last two chapters are missing. I kept thinking that the next book, or the next one, will answer the questions ... what about Scotland? What about the unopened letters? What happen to the German? My level of frustration has overcome my desire to keep going to see if any of these, or many other, questions have answers. If this style of writing does not bother you then you will most likely enjoy this and the rest of the series. I was moved learning about France and WW I, I was not bothered (as some others were) about his very slow road to recovery from the trauma of war. And I found myself worried about what would happen to Hamish when recovery did finally come. But none of that was enough to put myself through the worry that I would be left stranded, yet again. I just could not do it.

another good story in the series

I enjoy this mother-son team and they're riding in storytelling my bone to pick with them is they never do any follow-up for closure about what happens they just get into the next book each book has all kinds of things that as a reader or listener that I wondered about. Same thing with this book what were the final outcomes. other previous books had no closure on the relationship of his godfather with a child and the voice in his minds girlfriend. to the simple things of what happened when the Lord and Son were all found guilty of ordering the sons simpleton's wife...some people may think it's okay I wish someday I could listen to what the authors have to say about it look quite frankly it's annoying

A few atheists and turns. and more delving into the inspectors haunted past fro. the war.

I loved this book when I read it years ago. This time I was impatient with the many digressions from the story line.I am aware of the narrator too often and am uncomfortable with his grouping of words. I have enjoyed other narrators of Ian's books and feel this one could have been done better.

Would you try another book from Charles Todd and/or Samuel Gillies?

I enjoy this series immensely. I prefer Simon Prebble's narration later in the series to that of Samuel Gillies. However, my criticism of this production is that the audio is very poor. Many words have the first syllable cut off and it is jerky. This is very unusual in my experience with Audible audiobooks.

The authors have brought Inspector Rutledge to life through his military service, the demons he lives with from the Battle of the Somme and the importance of work in healing himself. This is an engaging and complex mystery with a sense of real life tragedy. I liked this book quite a lot.