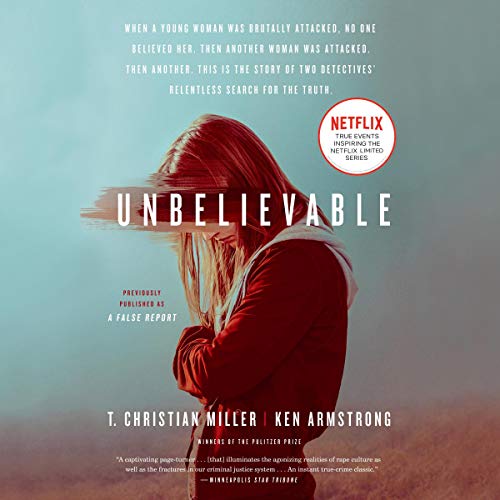 Two Pulitzer Prize-winning journalists tell the riveting true crime story of a teenager charged with lying about having been raped — and the detectives who followed a winding path to arrive at the truth.

On August 11, 2008, 18-year-old Marie reported that a masked man broke into her apartment near Seattle, Washington, and raped her. Within days police and even those closest to Marie became suspicious of her story: details of the crime didn't seem plausible, and her foster mother thought she sounded as though she were reciting a Law & Order episode. The police swiftly pivoted and began investigating Marie. Confronted with inconsistencies in her story and the doubts of others, Marie broke down and said her story was a lie - a bid for attention. Police charged Marie with false reporting. One of Marie's best friends created a web page branding her a liar.

More than two years later, Colorado detective Stacy Galbraith was assigned to investigate a case of sexual assault. Describing the crime to her husband that night - the attacker's calm and practiced demeanor, which led the victim to surmise "he's done this before" - Galbraith learned that the case bore an eerie resemblance to a rape that had taken place months earlier in a nearby town. She joined forces with the detective on that case, Edna Hendershot, and the two soon realized they were dealing with a serial rapist: a man who photographed his victims, threatening to release the images online, and whose calculated steps to erase all physical evidence suggested he might be a soldier or a cop. Through meticulous police work the detectives would eventually connect the rapist to other attacks in Colorado - and beyond.

Based on investigative files and extensive interviews with the principals, Unbelievable is a serpentine tale of doubt, lies, and a hunt for justice, unveiling the disturbing reality of how sexual assault is investigated today - and the long history of skepticism toward rape victims.

Previously published as A False Report

"This is a deep, disturbing, compelling, important book. A False Report digs into timeless issues - crime, victimhood, honesty, sexism - which have never been more timely. It is also a fascinating, sharply written story that will twist and surprise you." (Susan Orlean, author of The Orchid Thief and Rin Tin Tin)

“America has never adequately addressed sexual violence, a tragedy made worse by many who employ their own hierarchy of victimization, leaving many women and vulnerable people unaided. This meticulously researched, powerful exposé eliminates ignorance as a defense. This is a devastating but necessary read, composed by masters of investigative journalism.” (Bryan Stevenson, author of Just Mercy)

"Acaptivating page-turner.... There’s a gripping 'you are there' immediacy as crackerjack officers and criminalists pore over scant evidence - a wisp of skin left on a stuffed animal, videos of a white truck canvassing apartment complexes - before finally homing in on their man.... It would be all too easy to compare the book to a Grisham novel or an episode of Law & Order: SVU, but to do so would trivialize its achievement. A False Report is framed as a police procedural but illuminates the agonizing realities of rape culture as well as the fractures in our criminal justice system.... Rich in forensic detail, deftly written and paced, A False Report is an instant true-crime classic, taking its rightful place beside Vincent Bugliosi’s Helter Skelter and Dave Cullen’s Columbine." (The Minneapolis Star Tribune)

I am a victim of childhood sexual abuse as well as a survivor of rape while serving in the military. I want to state that first so you know, as a reader, where my perspective comes from. This, as well as Missoula and A History of Misogyny, are accurate both factually and emotionally.

While reading this book, I was triggered. But the respect and care that was taken to tell the story with enough detail to give an accurate picture of what rape is, as well as the dexterity to express the wide range of reactions to being raped was what made this an overall cathartic read.

I'm not going to go into details so as not to ruin the journey carefully and tactfully crafted by the authors. I am going to say that this book is profound and a clear and concise answer to the question, often posed in bad faith, "What about false reports?" and "What about the innocent men?" and "What about innocent until proven guilty?". It goes a step further and explains why the philosophy of believing the victim first is important and necessary in the investigation of intimate crimes.

Finally. Marie, if you ever read this, thank you. Thank you for your bravery. Thank you for your honesty. I reacted to my rape the same way you did. I told my story over and over again, like you did. I have a deadpan way of describing my childhood. I also had nobody believe me until well after the damage was already done. I too was hurt again by the people who were supposed to help me. Hearing that you're out there, somewhere, and living your life has breathed some life back into me. Thank you for telling me that I'm not alone. Thank you.

A riveting book that revolves around a woman who reports being raped, is doubted by the police and her friends, forced to recant, charged with making a false report, and basically made to plead guilty. But she’s not making up the story. Everything is fascinating on so many levels because everyone is interviewed: the woman, the rapist, the detective who charged her with making a false report, the detectives who caught the rapist, other victims. At the end is a rage-inducing description of the history of women not being believed about rape claims, as well as the institutional mechanisms that keep it happening even today. P.S. If you’ve read Jon Krakauer’s “Missoula” and are wondering if you want to tackle another book about rape, please know that they cover completely different territory. Grade: A

I found myself watching a new limited series show with the above title on Netflix when it hit me at the end that it must’ve been based on the book A False Report which had been in my cue for sometime. It was the same, so I jumped in and started it immediately. I couldn’t stop listening. Such a completely unfathomable experience for Marie especially because she wasn’t believed. Such stellar and diligent police work accomplished by Stacy and Edna. This book provides not only a picture of what happened in this particular case, but spends time sharing important data and telling the listener/reader what progress there’s been from events like this. Improving communication, yes, but also to believe the victim always until you get solid evidence to the contrary. Period.

Wow!! Everyone should read

I finished this as an audiobook in four days—I obsessively listened—and before I was even close to the end, I ordered a hard copy of this book to circulate among everyone I know who works in law enforcement.

I am a prosecutor. I assisted with a rape case a few months ago. The description of what victims go through was spot on. Although that portion was familiar to me, I learned a lot, too. This book will change the way I deal with rape cases and victims.

Thanks to the authors for their tremendous work.

This story goes through the motions of explaining how a victim is accused of false reporting based on flimsy ideas. It’s comprehensive and horrific in equal parts.
I pray this never happens again, but know that it undoubtedly will.
I applaud the authors for their work.

Things you should know

I categorize books like this as "things you should know." I don't read them because it's good (the writing is good) but because it's a topic I want to be educated about. I want to know these things are happening so I can try and stop them or change my behavior towards them. I read it before it became a Netflix series, and I'm still hesitant to watch the series. Such a compelling story. Reads like fiction.


Story: Compelling contrast between a pair of detectives inadequately (though understandably) investigating a rape as contrasted by a team of cooperative, collegial investigation by a different team.

Excellent, instructive contrast between optimal versus less than optimal precinct policies and climates.

I feel bad reviewing this before I’ve listened to much of it, but wanted to let anyone who is (like me) picky about narration that the woman who narrates this book is just terrible. I almost always only get audiobooks read by the author & I mistakenly thought that the authors read this book and had an additional narrator because of the way it is listed in the description, but they only read an afterword.

Sad case to listen to this

Very well organized and sadly so many truths in it. I could feel the emotional toll on the victims.

Really blown away by this. Picked it up as a free credit, not knowing a thing about it--although I recognized the case pretty soon. Amazing true crime book from the get go. Just brilliant. Riveting. Fascinating. Fantastically written and researched. A million times better than your average true crime. A classic. DId not want to stop listening. I especially appreciate the background and context they provided from the perspective of women--as victims, as cops, as researchers on rape. This is more than just one story, it is an important contribution to the study of rape as a phenomenon. Kudos to the writers, who happen to be men.

The performance is top notch. Just absolutely excellent all the way around.

this book is not easy to listen to but extremely important in understanding how rape survivors are mistreated by society. in order to change we have to understand better.