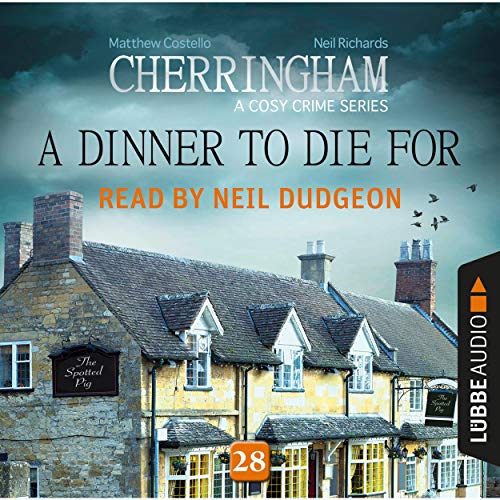 A Dinner to Die For

When a new restaurant with a starred American chef opens in Cherringham, it seems the Spotted Pig has a worthy rival. But a series of disturbing incidents turns that rivalry into something dangerous - perhaps even fatal. Jack and Sarah get involved and soon discover dark secrets about the new chef Anna... Can they uncover what is really happening before both restaurants go belly-up?

Cherringham is a serial novel à la Charles Dickens, with a new audio episode released every two weeks. Set in the sleepy English village of Cherringham, the detective series brings together an unlikely sleuthing duo: English web designer Sarah and American ex-cop Jack. Thrilling and deadly - but with a spot of tea - it's like Rosamunde Pilcher meets Inspector Barnaby. Each of the self-contained episodes is a quick listen for the morning commute, while waiting for the doctor, or when curling up with a hot cuppa. For fans of Agatha Christie's Miss Marple series, Lilian Jackson Braun's The Cat Who series, Caroline Graham's Midsomer Murders, and the American TV series Murder She Wrote, starring Angela Lansbury.

The narrator of the audiobook, Neil Dudgeon, has been in many British television programmes including the roles of DCI John Barnaby in "Midsomer Murders" and Jim Riley in "The Life of Riley". He is also known for his film roles in "The Nativity", "Sorted" and "Son of Rambow". In 2012 Dudgeon starred as Norman Birkett on BBC Radio 4's Afternoon Play series written by Caroline and David Stafford.

Everything about this series is perfection, from the characters who feel like real friends, to the expert narration. It’s a cozy mystery without all the fluff (no romance etc). It’s all pure plot & each story focuses on a new case. They’re self encompassing stories, however I still recommend starting at book 1 if you can because you really develop a relationship with the characters

I love this series!!

I look forward to each new story. The stories are lively and fun to listen to.

I love these books! I thought that # 27 was the end of the series. Imagine my surprise when I saw this book!! It, as usual, was just the right fit for a cozy English mystery! Thank you, Mr. Costello and Mr. Richards, and as usual, Mr. Dudgeon has the " perfect" voice.

I love Sarah and Jack. The mysteries are marvelous little gems. Can't wait until the next one.

Enjoyable listen with well rounded characters. Loved the Serena character with her quirky, intelligent cureosity and determination. Olive is a splendid main character and we'll done in development.

Fun little story. I loved the narration. A good listen for a short story.

I love all of the stories in the Cherringham line. this is just another addition... Just waiting for Jack and Sarah to get together LOL

Nothing deep, but lots of fun.
I really love these light mysteries.
Give me one, a cold night, and a fire with a hot cup.

Good story Good characters Good ending. And I should have enough words to post this.

Narrator top notch. Weak plot in the middle. Over all entertaining. I would recommend it for lite reading.