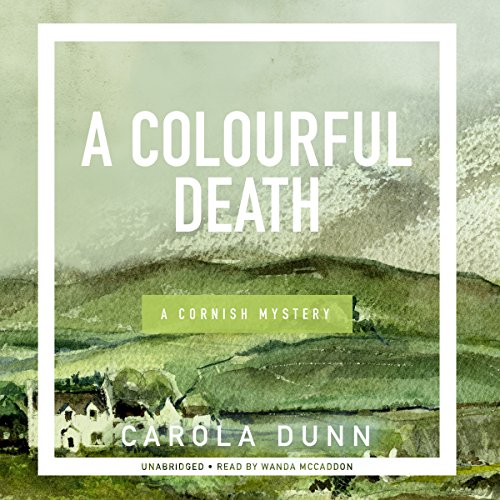 Eleanor Trewynn is a recently retired widow who has moved to the small village of Port Mabyn in Cornwall. Neither frail nor retiring, after a lifetime of traveling the world, she's ready for an uneventful life with her dog and friends in this quiet town. Unfortunately, excitement seems to happen around her.

Her friend and neighbor, artist Nick Gresham, returns from a trip only to find several of his paintings slashed, reportedly by rival local artist Geoffrey Clarke. When Nick goes to have it out with him, with Eleanor in tow, they find Clarke's body in his studio, fatally stabbed in the back. Accused of the crime, Nick ends up in jail, while Detective Inspector Scumble and DS Megan Pencarrow, Eleanor's niece, investigate. But in A Colourful Death, the second Cornish Mystery from Carola Dunn, Eleanor isn't leaving anything to chance - she starts doing a little investigating of her own, and soon learns that Nick is far from the only one with a compelling motive for murder.

Interesting path to a solution

A Colorful Death by Carola Dunn, sequel to Manna from Hades, set in Cornwall, focuses on local artists, first and foremost Nick Gresham, neighbor to Eleanor Trewynn. Nick returns joyfully from a trip to an important gallery in London that has requested to display his artwork for sale, only to find that several of his major pieces have been slashed by a fellow artist in jealousy over Nick’s success. Furious over the destruction of the work he has put so much effort into creating, Nick determines to confront Geoffrey Clarke. Insisting on going along as an experienced life-long diplomat, Eleanor joins Nick in traveling to Geoff’s studio, only to find the artist stabbed in the back, surrounded by bright red that looks like blood. Immediately, Geoff’s lover comes in and screams that Nick has stand Geoff, claiming she witnessed Nick stabbing Geoff.

The police immediately drag Nick off to jail, with the deputy’s just barely glancing at the scene without even checking to verify that Geoff is really dead. With really poor quality interviews, the inspector does not even talk with Eleanor. Instead, he sends her to spend the night at the artists’ community, often called a commune incorrectly by those in the rest of the region, despite the fact that the tenants could be suspects. Nick has to spend the night in the lock-up. The next morning, Eleanor’s niece, Detective Sergeant Megan Pencarrow, gets a call to pick up her boss, Detective Inspector Scumble since the case has been handed over to them because the original inspector is certain he has an open and shut case against Nick. But once the crime scene people’s report comes in, it becomes clear that Geoff was dead long before Nick found him, clearing him of the murder. Now it is up to Megan and her boss to find the real murderer.

When I read a mystery book, I am less interested in trying to solve the case myself than in enjoying the journey of investigation. This book did not do a particularly good job of hiding the identity of the murderer, though it seems to attempt to do so. Thus, if you care about trying to ferret out the criminal through a maze of clues, you may be disappointed. But the path to finding the solution still caught my attention.

I really enjoyed this book. I enjoyed getting to see the artists’ community and all the ways that each works. Even though I don’t care about art in general, I found the discussion of art pieces and even the process of making pottery fascinating. I also enjoyed the characters and the relationships among them, especially as DI Scumble starts to come to respect Eleanor, who drove him crazy in the first book.

The audio version of this book is narrated by Wanda McCaddon. She gives a good performance, including good jobs with different accents. I liked her voices and the way she delivered her role.

A Colourful Death kept my attention throughout, even despite a severe migraine. In fact, it helped me a lot to distract me from the pain I was experiencing and entertained me. I give this book four stars.

I really wanted to like this series. As a Dorothy Gilman fan I was looking for a similar tough and resourceful older heroine. Unfortunately, even though all of the characters kept talking about how quirky and unexpectedly resourceful the heroine Eleanor Trewynn was, nothing in her character or actions proved it to me. She is like a cardboard cutout. I read two of the books in the series to give it a chance, but was disappointed in both.

I gave the first book in the series a better rating. If you liked it, you may enjoy hearing about the same characters. Also, the narrator's voice is easy to listen to.
However, for me, the mystery plot line is too weak in this installment.

Quite an enjoyable listen

Really fun, characters are well developed and quirky. A pleasant listen. I have a hard giving five stars for Cody mysteries, but it is really well written and performed.

Such a companionably read story! Reminiscent of Agatha Christie: intriguing and a touch suspenseful, but not bloody or frightening. Perfect for listening while walking or doing any handiwork or task. Thank you for making my ordinary day a very pleasant one!

As always an excellent story

Carols Dunn is a wonderful writer who does great period mysteries with women detectives. Learned an immense amount about Cornwall in this series and hope fervently for more!

It's a quite good cozy; and superbly narrated. A sweet old lady (the protagonist) and her friends come off as likeable and lively. My main objection is the DI character. I simply can't stand his ruggedness and inconsiderate way he treats his subordinates and witnesses. I gather he was meant to be somewhat rough around the edges, but it's overdone and spoils otherwise enjoyable story.

This book’s only redeeming quality for me was the narrator. She was brilliant. The plot of the book was good, but written as if a middle schooler heard the eff word and used it in every sentence he ever said thereafter. The book’s characters were well developed, but really not very appealing or bright. The book was inundated with lots of drug use and alcohol abuse and strange references to ‘white privilege’. A navy seal, deployed so many times that there is nothing left of the person he was; riddled with PTSD and expected to be ‘normal’ within a day of becoming a civilian is told he has ‘white privilege’? I finished this title only because of the narrator.

It was a bit predictable who the murderer was but figuring out how it all went down & motives was a good tale in between.