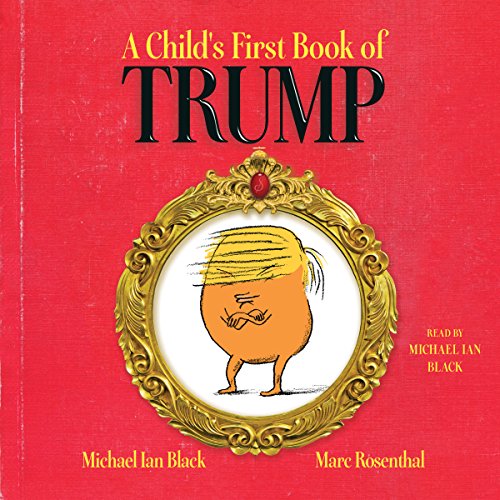 A Child's First Book of Trump

What do you do when you spot a wild Trump in the election season? New York Times best-selling author and comedian Michael Ian Black has some sage advice for children (and all the rest of us who are scratching our heads in disbelief) in this perfectly timely parody book intended for adults that would be hysterical if it wasn't so true.

The beasty is called an American Trump.

Its skin is bright orange, its figure is plump.

Its hands, though, are, sadly, underdeveloped.

The Trump is a curious creature, very often spotted in the wild, but confounding to our youngest citizens. A business mogul, reality TV host, and now...political candidate? Kids (and, let's be honest, many adults) might have difficulty discerning just what this thing that's been dominating news coverage this election cycle is. Could he actually be real? Are those...words coming out of his mouth? Why are his hands so tiny? And, perhaps most importantly, what on earth do you do when you encounter an American Trump?

With his signature wit and a classic style, comedian Michael Ian Black introduces those unfamiliar with the Americus Trumpus to his distinguishing features and his mystifying campaign for world domination...sorry...president of the United States.

I don’t judge anyone but this is sooooo accurate 😂 #rockthevote Please let us make change!

Thanks Michael Ian Black for writing this. Super clever and chuckle-worthy! Totally worth 7 minutes of anyone's time!

Loved it! lighthearted humor for all ages. way to go MIB! Bought as a joke but loved it and will be sharing.

A brilliant short little book. It's like Dr Seuss and Mark Russell had a baby, and it was this book. A must for all who like humor and politics

Wanting to take your brain out of your head and cook it? Then this is the perfect book for you. Let's avoid how much us minorities have been manipulated since forever.... Trump is not the best spoken, but he gives everyone a shot. cruddy book.

So clever that I wish I had thought of it. But there is no way I could have done it as well as Michael Ian Black did. Funny and smart. So happy to have bought this. And another reason to follow Black at all the various things he does.

Not sure the best age group

This was good humor, but I’m not sure this would be understood by someone 6 and under. But depending on your family it could be good.

I loved this book! Dr. Seuss would be proud.
I Love the doctor Seuss style that he used in writing this book.
So simple that even a Trump lover can follow along.
Loved the background music as well. That just made it better.

this book is a trip! literally LOL

I found this book accidentally and just had to hear it...im thinking of gifting this book
it had me laughing through most it!