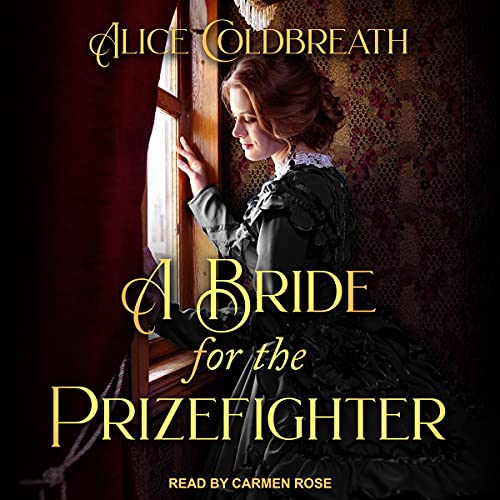 A Bride for the Prizefighter

Mina's well-ordered life is thrown into disarray when her father drops a bombshell on his deathbed: She has a brother she never knew of. Not only that, he is on his way to rescue her from the collapse of their school under a mountain of debts.

A wild journey across country later, Mina finds herself thrown at the feet of the brutish William Nye, prize-fighter and owner of a disreputable inn, The Merry Harlot. Respectable Mina is appalled to find herself obliged to wed this surly stranger!

Forced to draw on reserves of inner strength she never knew she possessed, Mina uncovers perilous secrets and bravely carves herself a new life at the side of this man, as she proves herself a more than worthy partner for the prize-fighter.

This is the first time I’ve listened to anything by this author, but it was so good that I’ve already listened to it twice.
It has a good amount of sexual content, so if you need a clean romance, this isn’t it.
I love both main characters! I really love the brother’s character too, as people are never all bad or all good. I cannot wait for this author to release more on Audible! Hopefully she will continue to use Carmen Rose as she is one of my favorite narrators!

This book was very one sided. We only get the story from the heroine's point of view. I kept waiting on the hero's thoughts and by chapter 4 I figured the author chose not to give him any... Sad. The book could have been so much better. I liked Minerva, She was strong, kind and resourceful. Nye was just a big dumb, mean oxen of a man who did not contribute much except sexual passion to the story. I would not use a credit on this book.

I usually like Colbreath's books but this one is not very good.

Coldbreath has a way of writing pragmatic, honest heroines that are still wildly interesting. Her heroes tend toward the grumpy, possessive type. They are all different, though and I love that about her books. They have similar elements but are distinctly different. This book has the couple at loggerheads more than some of her books. A couple of times it got old for me, but it is reigned in before it gets too bad. And, honestly, the couple seems to enjoy it. A lot.

This book is so well written and narrated. The story and characters are outstanding. It is now on my favorite list!

One of my favorites; few issues w narrator

I pretty much love everything I've read by Alice Coldbreath; this series, the Vawdrey Brothers; the Brides of Karadok, some more than others. This one is one of my favorites-all the characters are filled-in, even minor characters the you "see" for only a few pages; Ms Coldbreath has the ability to write every character so you understand them, and can see them; another thing that she does, that I absolutely love about her writing, she fills in the minutae of daily life; she creates an entire person and setting, but doing this you can see the characters, their actions and the plot so clearly. If you are super picky about every single detail being perfectly perfectly accurate, there's a few things, but THEY DON'T Matter, because the story, characters and everything else is wonderful; it's the kind of book where you notice more things each time you read, and it reminds me a bit of Jane Eyre, bc past the story, there's a kind of a study about class, what exactly is "good" and what makes someone good, bad or just flawed. narrator does a great job, but misses Nye's voice a bit. And "pasties" are pronounced "pah-stees," not "pay-stees" -I only mention this bc there's an epic difference between the two.

didn't get to read it

it finally happened. I absolutely could not get through even the first chapter. The narrator's voice irritated and drove me nuts. I could not get past it.

I love Alice Coldbreath. I couldn't stand hearing her books read by Anne Flosnik. Flosnik is familiar to me from other books and I baulked at hearing her read the Vawdry men. But Carmen Rose read this book PERFECTLY. I IMMEDIATELY bought the next one-substitute wife- and am so grateful for Carmen Rose's narration of a book I adore!!!

One of my new favorites!

I love historical romances but I get tired of the same heroes and heroines, all aristocratic and wealthy. It is such a refreshing change to read a truly compelling romance involving characters from a different walk of life. Nye treads the line of unlikability with his jealous tirades and temper but Mina is more than a match for him and you feel like they are real people who against all odds ended up with someone perfect for them. Great read!

Never Disappointed with this Author

I love Alice Coldbreath as an author and her stories so far have never disappointed this reader. “A Bride for the Prizefighter” was oh so delightful and such an enjoyable read. A trope of marriage of convenience with a lovely HEA. I had a hard time putting it down and loved the MCs in this story. Her development of overbearing heroes and strong-willed heroines makes her stories so unique as you see their personalities come alive throughout the pages of the story. Wished there could have been more depth to their characters other than the continued banter that led them to the bedroom. I loved how Mina with her prim and proper ways was able to transform Jeremy from the villainous brute into a charming marriageable husband. Narration by Carmen Rose was done very well.