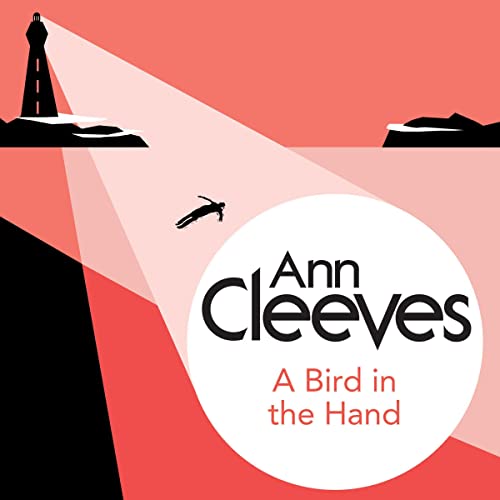 A Bird in the Hand

A Bird in the Hand is the first mystery novel featuring George and Molly Palmer-Jones by Ann Cleeves, author of the Shetland and Vera Stanhope crime series.

In England’s birdwatching paradise, a new breed has been sighted – a murderer....

Young Tom French was found dead, lying in a marsh on the Norfolk coast, with his head bashed in and his binoculars still around his neck. One of the best birders in England, Tom had put the village of Rushy on the birdwatching map. Everyone liked him. Or did they? George Palmer-Jones, an elderly birdwatcher who decided quietly to look into the brutal crime, discovered mixed feelings aplenty. Still, he remained baffled by a deed that could have been motivated by thwarted love, pure envy, or something else altogether.

But as he and his fellow ‘twitchers’ flocked from Norfolk to Scotland to the Scilly Isles, in response to rumours of rare sightings, George – with help from his lovely wife, Molly – gradually discerned the true markings of a killer. All he had to do was prove it...before the murderer strikes again.

This is the first of the Palmer-Jones couple mysteries by the prolific and successful and usually highly competent Ann Cleeves. For me characters, setting and the mystery are the key ingredients. In an audiobook, the narrator's skills and range also come in to play. I got this in hopes that it would be transporting in the way a good mystery can be. There's lots of potential with this series and I might have enjoyed it more reading rather than listening. The narrator was competent but limited by a ponderous rather grim tone that colored the whole story. At times it felt like I was trapped with a depressive, which can be just fine in a story, but not my taste. As for the story itself - strained credibility to me - a twitcher is murdered on the marsh on a Saturday morning. A local magistrate asks PJ to privately investigate because he's worried about his adolescent son who's a twitcher. The set up is a strain, but hey, it's a mystery, it happens. The ridiculous part is that over the course of the next week, there is zero apparent police activity, so our amateur detective has the field to himself (with his wife as empathetic sidekick). Even more of a strain, is the fact that all of the suspects are surprisingly open to his snooping. There's significant (too much) soul searching by our detective who seems to see this case rather self-referentially as a challenge to his own skills, judging everything in terms of it's impact on his varying self image of competence/skill. Some good character development and an enticing enough setting, but though the ingredients are present, the recipe for this needs work. I will be cautious about further entries in this series.

Happy to Finally Have These

Had read (old Stasio reviews in The NY Times) that these early Cleeves bird watching novels were wonderful, and it turns out, as with most mystery books Stasio considered, she was right. Had known that these were available in audiobook format, but not via Audible. Saw them recently by accident, and intend to use credits for all of them (unless they go on discount sale in which case I'll buy all of them). If judged by this one, these may not be as accomplished as the Vera or Shetland series, but they are a cut above most other writers' work. (Now if we could only get Audible to bring the LeCarre narrated abridged versions of Tinker Tailor and Smiley's People (he was his own best narrator) and the "Ladylike" series on Audible, I'd have prespent my 2022 credits and happily.)

Narrator killed it for me, otherwise good

The narrator is a good reader, but not the best actor. I had a hard time distinguishing between characters when their was only dialogue to go by. The tone of his voice is very soothing, to the point where I found my mind wandering sometimes.

I enjoyed the story. It wasn't predictable but it was solveable.

Better than Two Rivers series, but…

This leaves a lot to be desired. The narrator is grim and depressing. I may try speeding up the recording to see if he’s more tolerable that way, but right now it’s like listening to someone read the classifieds. I’m not feeling the main characters either. We are given very little to get to know them. I love the setting and the birds information, but I’d rather have more Vera and Shetland Islands books any day!

and sad.  I don't like the main character at all.  It occurs to me that part of it might be the narrator, who is so bland as to almost be bored, but I still have no connection with the protagonist.

Not What I’ve Come to Expect from Ann Cleeves

I choose this because I’ve listened to most of her books and thoroughly enjoyed them. Some may enjoy the storyline but I was quite bored. Narrator was sleep inducing. Not my cup of tea so I will stick to her other series in future.

George & Molly Palmer-Jones are new characters for Ann Cleeves and just don't draw the reader in as her other protagonists (eg Vera) do. I listened until the last few chapters and just quit. George and Molly are BORING. I just didn't care about them or learn much about them. They had no character, good back story, or interesting investigative skills. The reader added to the problem - sort of a monotone and made no effort to differential the various characters, even by gender. All in all a real disappointment.

The narrator is so profoundly flat and boring that I couldn’t enjoy the story. Really regret wasting my credit on this horrible rendition

A new series by Ann Cleeves and it’s fantastic. And birding is again a big part