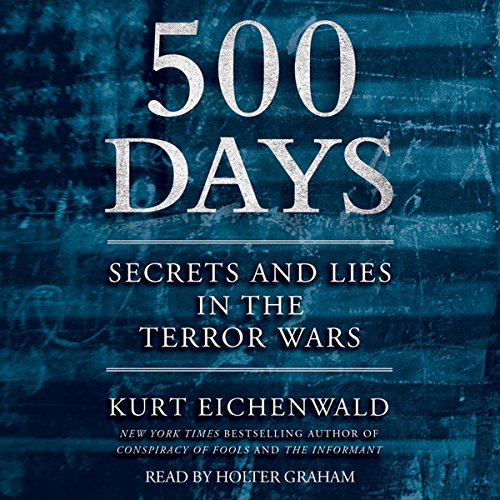 Kurt Eichenwald - New York Times best-selling author of Conspiracy of Fools and The Informant - recounts the first 500 days after 9/11 in a comprehensive, fly on the wall, compelling pause-resister as gripping as any thriller.

In 500 Days, master chronicler Kurt Eichenwald lays bare the harrowing decisions, deceptions, and delusions of the 18 months that changed the world forever, as leaders raced to protect their citizens in the wake of 9/11.

Eichenwald's gripping, immediate style and true-to-life dialogue puts listeners at the heart of these historic events, from the Oval Office to Number 10 Downing Street, from Guantanamo Bay to the depths of CIA headquarters, from the al Qaeda training camps to the torture chambers of Egypt and Syria. He reveals previously undisclosed information from the terror wars, including never-before-reported details about warrantless wiretapping, the anthrax attacks, and investigations and conflicts among Washington, D.C., and London.

With his signature fast-paced narrative style, Eichenwald - whose book, The Informant, was called "one of the best nonfiction books of the decade" by The New York Times Book Review - exposes a world of secrets and lies that has remained hidden until now.

"With the pacing of a suspense novel, award-winning journalist Eichenwald's richly researched account ... [is] a breathtaking inspection of the war on terror that began on 9/11 and reverberates to this day." ( Booklist)
"Gripping... both a page-turning read and an insightful dissection of 9/11's dark legacy" ( Publishers Weekly)
"A blow-by-blow, episodic reconstruction of the fallout from 9/11 in the highest spheres of terrorist strategy... demonstrating literally how the anti-terrorist hysteria in the United States, and the hatred of America and general global paranoia, forged the 'trauma that haunts the world to this day.'" ( Kirkus Reviews)

Very interesting book on Post-9/11 Washington. Eye opening and an easy read and listen (I read it on Kindle also).

This book will make you think whether you are a Neo-Con or a Dove.

I must say that I was a supporter of the Iraq War and the renditions, but have been rethinking all of these issues. This book excels at bringing events together that were happening all over the world at the same time. That is why I would recommend this title.

I also enjoyed the narrator.

Also, Mr. Eichenwald gave interviews after this book was released, so search for him on YouTube. His comments on the book provide more insight.

What would have made 500 Days better?

If a book this caliber talks of Turkey as a country that has border woth Afghanistan how can I take it serious anyway?
If you like a fiction thriller you might like it but it's not a book I would take very serious
Sorry.

This is a must for anyone wanting to know more about the subject. It also goes very well with similar books published around the same time.

What was one of the most memorable moments of 500 Days?

It is hard to say becuase there are so many part of the books that took me by surprise.

Yes - I could not stop listening to it.

Epic story of catastrophic overreach and callow foolishness told in an endless series of breathless mini-vignettes. Seems the wrong style for such a long treatment.

Narrator is terrible. Trails off to inaudibility at the ends of his sentences, has one, all purpose, foreign accent (why any?) and can't read: it's ciprofloxacin, not "ciprofloxin"; KAbul, not" KaBOOL" and Dostum, not "Dotsum"!

Eichenwald presents a stark look at the ego-driven failures that led to the disaster on 9-11 and the disastrous policies and practices that emerged from it. Necessary reading for anyone who wants a clear picture of the sort of thinking that pushed America over the line into a state that participates in torture.

Holter Graham's performance was spot-on and matched the tone of the book.

Gory Details of Torture, Not An Unbiased History

In this book, the author tries to show how the Bush administration acted with ignorance, stupidity and outright maliciousness leading up to and in response to 9/11. Most of the book is spent describing in great detail newly available details of the torture of terrorist suspects and the decisions of officials that lead to it. In particular a narrative that runs throughout the whole book is that of Kuwaiti Ahmad El-Maati. He is supposedly a completely innocent Canadian Muslim truck driver and family man who as a result of bumbling by the Canadian and US intelligence services was sent to Syria for some very intense and brutal torturing. All the gory details of these torture sessions are weaved into the narrative throughout the book to disgust you and to keep the sometimes dull story interesting. The author argues that torture as a interrogation technique never works. And that as one study has shown, being nice to and empathizing with terrorists is the most effective way to get them to talk.

The author does have a unique perspective on Tony Blair’s role. He presents him at first as making wise and practical choices, and suggesting to Bush in private that he was making the wrong choices. Knowing on the other hand that any disagreement with Bush in public could damage the relationship and even make it more difficult to persuade Bush not to invade Iraq. However, it seems that after a few friendly and intimate meetings, Blair drank the cool aid and became a true believer in the Bush doctrine.

The narrator does a great job with this audio book. He had unique and convincing accents for all the characters ranging from President Bush, Dick Cheney, the Muslim terrorists, and even Tony Blair and his staff. Amusingly though, he makes Blair sound allot like Oliver Twist.

Overall I would say that if you were angered about the decision to allow torture in the “War on Terror”, than this book is definitely for you. On the other hand if you are looking for a historical perspective that reports the facts without the bias than much of this book will disappoint because the details of many of the successes are ignored.

Excellent book in need of a Narrator

What did you love best about 500 Days?

This book does an excellent job of disclosing how even the most disciplined minds, once arrogance and power overwhelm experience and wisdom, can destroy the most cherished principles we have. The narrator, however, has a talent for making everyone sound stupid when quoted. His "Italian" accent sounds like it is from Transylvania. The fine writing kept me going but with this narration, it was tough. He didn't do much for "The Art of Fielding" either where, once again, his voice has a penchant for making characters seem really stupid. One wonders why.

Read with meaning and leave his theatrics at home.

I will have trouble with any new book read by this guy.

The real surprise behind 9/11

Where does 500 Days rank among all the audiobooks you’ve listened to so far?

500 Days ranks at the top of all audiobooks I have listened to.

I see Vice President Chaney in a different light. He could be one of the most outspoken VP's our country has ever had.

What does Holter Graham bring to the story that you wouldn’t experience if you just read the book?

Graham brings more descriptive illustrations to the story behind 500 Days.

500 Days changed some of my opinions regarding the aftermath of 9/11. I was touched by the lengths the U.S. government would go to protect our nation.

Have you listened to any of Holter Graham’s other performances before? How does this one compare?

Holter Graham's insistence with putting on accents (one in general for all people of Arab extraction, in particular) is rather annoying, and goes from cartoonish to borderline stereotypical - and at the very least, to arbitrary. I would just as soon have preferred the straight reading, thank you very much.