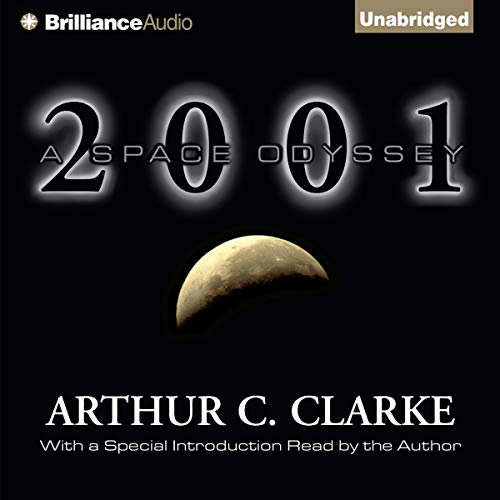 It has been 40 years since the publication of this classic science-fiction novel that changed the way we look at the stars and ourselves. From the savannas of Africa at the dawn of mankind to the rings of Saturn as man adventures to the outer rim of our solar system, 2001: A Space Odyssey is a journey unlike any other.

This allegory about humanity's exploration of the universe, and the universe's reaction to humanity, was the basis for director Stanley Kubrick's immortal film, and lives on as a hallmark achievement in storytelling.

While the movie left me confused and wanting an explanation of what I'd just spent hours watching. The book made me exited to listen to the next in the series.

I, by chance, saw the movie before deciding to pick this up. To me the movie just slowly moved through the paces of, mysterious mission to Jupiter, crazy computer, triumph, crazy drug trip. The ending killed it for me because it made zero sense.

The book fills in the gaps to explain the imagery of the movie and so very much more, the story is well explained and engrossing, so long as you let the imagery take you and are not impatient with the time devoted to detail.

The glory and horror of space

2001: A Space Odyssey is the novel that Arthur C. Clarke wrote so that Stanley Kubrick could develop it into the now-famous movie. It’s partly based on two of Clarke’s short stories: “Encounter in the Dawn” (1953) and “The Sentinel” (1948). The first story tells of a technologically advanced race that visited Earth millions of years ago, discovered early humans, and gave them some technological jumpstarts (and “one small step toward humanity.”) In the second story, humans have finally reached the moon. Much to their excitement and consternation, they discover an ancient alien artifact that may be an alarm to alert aliens when humans manage to get themselves off their little planet.

If you’ve seen the movie, you know that we see these plotlines unfold and connect in 2001: A Space Odyssey. A related plot involves a spaceship traveling to Saturn that’s controlled by a new self-conscious computer named HAL 9000. Perhaps the most famous scenes in the movie (and I think these are some of the best scenes in the book, too) occur when HAL decides to override the astronauts’ commands because of his own interpretation of his original instructions (this reason is not explained in the movie). These scenes are probably even more frightening today than they were back in 1968. Clarke perfectly captures our fear that the artificial intelligences we create may become smarter than we are and, therefore, out of our control.

I can’t resist Arthur C. Clarke’s visions and I have enjoyed everything I’ve read by him. It’s exciting and awe-inspiring to read his speculations about creation, the mysteries of space and time, extraterrestrials, artificial intelligence, the freeing of the spirit from the body, the existence and nature of God, and what’s “behind the back of space.” I also enjoy his theoretical arguments about the speed of light, physics, relativity, wormholes, etc. Clarke’s awe of space and his expectation that humans will conquer it is infectious and thrilling. At the same time, the possibility that we, who thought we were alone, may not be, is both exciting and disturbing. Clarke writes beautifully of both the potential glories and horrors of space.

I listened to Dick Hill narrate Brilliance Audio’s version of 2001: A Space Odyssey. Dick Hill narrates a lot of old science fiction and here he is as wonderful as he always is. His voice for HAL was so creepy it gave me chills (“Hey, Dave… what are you doing?”). The audiobook begins with an interesting talk by Arthur C. Clarke in which he gives us some context and background for the story, talks a bit about his writing process and collaboration with Stanley Kubrick, and mentions some of the pop culture that the book and movie have spawned. Three sequels to 2001: A Space Odyssey continue the story and address some of the questions that Clarke leaves us with.

The book needs no introduction and it would be sacrilege to write a review on it. I will confine myself to the audiobook details. Dick Hill brings the book to life. He has many voices and he uses them wisely. His narration leaves us spellbound.

I wanted to listen to the other books in this series. Sadly I don't find them on Audible.com :( Hope you guys add it to the library pretty soon.

Even if you have read the book before, listen to this performance by Dick Hill now. You will not repent it.

The book is much better than the movie! The movie does not describe anything that is happening and half of the time you're wondering what just happened or if you missed something. This is a nice short audio book and is well worth the price. It's great on a road trip!

IT'S FULL OF STARS

2 CHILD LAWS, NEWSPAD (I-PAD), STARGATE
I have lost track of how many times I have read the book, listened on tape, watched the movie, and now I have downloaded it. Arthur C. Clarke is in a class, all by himself. To hear his voice in the introduction was a real treat. It is amazing the amount of things he wrote about in the sixties that are now everyday things.

Kids under 40 may find this book and the movie to be a little slow and a little technical. That is only in parts. The story as a whole is a masterpiece.

The book differs from the movie slightly and that is explained by Clarke in the introduction. A good look into the making of a movie and the writing of a book. To be honest I felt that the tension built by dealing with HAL was done better in the movie. I loved this, but I really liked (The City and The Stars )and (Rendezvous with Rama) better.

I had not realized until this reading that Clarke was part of the group warning us about overpopulation, Pohl, Harrison, Asimov, and Silverberg among many. He talks about Americans having meatless days and about many countries having 2 child laws. If you are over 50, you may remember the hysteria about overpopulation and the dire predictions for the turn of the century. Things we need to think about as today's writers call us stupid for not freaking out over there warnings about the most popular predicted crises of today.

Dick Hill is my favorite narrator.

Dick Hill did a great job with the characters, including HAL, and the "preface" interview with Arthur C. Clarke was very interesting and shed light on the movie as well. I haven't watched the movie in years, and I have to admit that listening to this didn't bring back memories of the movie at all, which I think is a credit to the book. This is a great, introspective, and thoughtful journey through space and time, both in the story, and in the context (a lot has changed since this book was written). Enjoy!

In my opinion, this was a 5 star book until the last hour. Most of the story was really straightforward, clever, suspenseful, enjoyable sci-fi until the end. Seems like Clarke was trying to cram all his deeper meaning and allegory into the last few chapters. That being said, the rest of the book was fantastic. I would still recommend it, the ending just wasn't for me.

I loved this book, it is a well paced novel. Clarke's ability to pull you into a world is amazing.

Worth the first half

After the halfway point it picked up. Hard for me to get into initially, too much description and technical information. But the second half was hard to stop listening to! Excellent narration.

Starts with an introduction by the author which is not well recorded, which is about 50 minutes.

The book's narrator, Dick Hill, was fantastic and his narration was well recorded. Read the book even if you've seen Kubrick's movie. The movie was a nice artistic rendition of the book but does not hit the level of detail of the book.

the ending was maybe alittle too imaginative for my taste but I guess thats what sci-fi is all about. I'd have preferred to read more about the implications back on earth.