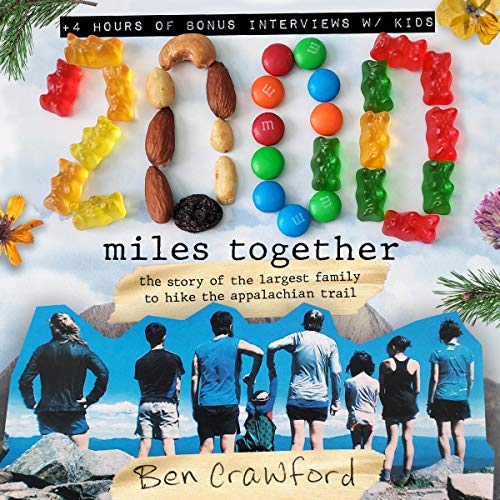 A behind-the-scenes edition of 2,000 Miles Together, offering over four hours of bonus content featuring interviews and insights by the Crawford family. Not available in other formats.

As his six children slept on the dirty floor of a women’s restroom while a blizzard howled outside, Ben Crawford had one thought: Have I gone too far? The next morning, Child Protective Services, along with an armed sheriff, arrived to ask the same question.

2,000 Miles Together is the story of the largest family ever to complete a thru-hike of the Appalachian Trail, defying skeptics and finding friends in the unlikeliest of places. On the trail, Ben Crawford battled not only the many dangers and obstacles presented by the wilderness - snowstorms, record-breaking heat, Lyme disease, overflowing rivers, toothaches, rattlesnakes, forest fires, and spending the night with a cult - but also his own self-doubt. In an effort to bring his family closer together, was he jeopardizing his future relationship with his kids? When the hike was done, would any of them speak to him again?

The Crawford family’s self-discovery over five months, thousands of miles, and countless gummy bears proves that there’s more than one way to experience life to the fullest. You don’t have to accept the story you’ve been shown. By leaving home, you’ll find more than just adventure - you’ll find a new perspective on the relationships we often take for granted, and open yourself up to a level of connection you never thought possible.

Wow! Just wow!! This family is such an inspiration! Read this book!! I think if every American family put safety second our world would be a different (better) place!!

This book started so good, but I lost interest fast. I was hoping to read an Appalachian Trail memoir, but what I got was a memoir that could have taken place anywhere. Occasionally the State that they were in was mentioned but that was about it as far as being able to follow them along the trail. Absolutley no description of what they saw on the trail. The post chapter discussions were a great idea, but the kid's constant use of the word "like" made them completely unlistenable. In 1 short 2 minute discussion I counted 62 "likes". I started skipping them after the first few chapters. Such a shame because this could have been a much better book.

What a great story!

I loved the commentary on each chapter. And now I want to go hike. Part nail-biter, part family story, complete enjoyment.

Fantastic!!! You will be hard pressed to find a more compelling story about the AT. Thank you for your authentic and vulnerable glimpse into your journey. The added behind the scenes commentary was a plus. Can’t wait for your next adventure.

A Story of a Family’s Journey

Whether in life or on the trail, we all have a story that comes with the journey. This story is not just about the trail, not just about the adventure but about a family‘s journey with each other. You’ll hear about the inner journey of each member of the family. Although “dad” is the primary storyteller, you’ll hear the experiences and voices of each family member.

You’ll also hear from both fans and critics, as Crawford reads the online comments during the family’s hike. Those trail angels and trail family members they actually met are a big part of the story too.

I really enjoyed hearing from the whole family, their story and in their voices. You don’t have to be a hiker to enjoy the book. And if you’re like me, didn’t have any knowledge of their AT experience or YouTube channel before the book, you’ll still enjoy their story.

Hike your own hike!

A truly inspiring story, brilliantly written and narrated in a personal, sincere and emotional way that makes it impossible not to feel a special connection to the characters. I laughed, cried, suffered and rejoiced along with the Crawfords as they hiked the entire 2,000 miles of the Appalachian Trail. Additional “behind the scenes” commentary you get with an audiobook makes it even more poignant and true. The Crawford Family journey of self-discovery is a lesson in how to nurture the thing we all need and want the most - true intimacy.

I watched you before the hike during the hike and currently. I love the book. It’s a treat to actually hear y’all’s thought while on the trail. I will in the AT class of 2022.

So glad I purchased the audio book

I received this book for Christmas, but was happy to also order the audio book so that I could listen while at work. I loved the "behind the scenes" additions to the book. It was great to hear Ben, Kami, and the kids all give a little insight into the chapters of the book.

Being from Pennsylvania, I could picture the rocky, and crazy terrain that you described. While Pennsylvania is beautiful, it has so many hills, valley, mountains, humidity, and rocks!

Thank you for sharing your story.

so much fun to hear the kids and Kami!

I enjoyed this story. Ben reads to you like a dad telling a bedtime story.

A book of true brilliance, raw unfiltered and behind the scenes, unlike the average "saving face" type person or family. I have to respectfully disagree with Ben, he mentioned it wasn't really a adventure book. I feel this is a perfect adventure of mind, body and soul! I imagine this was the first of many times I will listen to this book. thank you so much for writing down your journey for the rest of us.