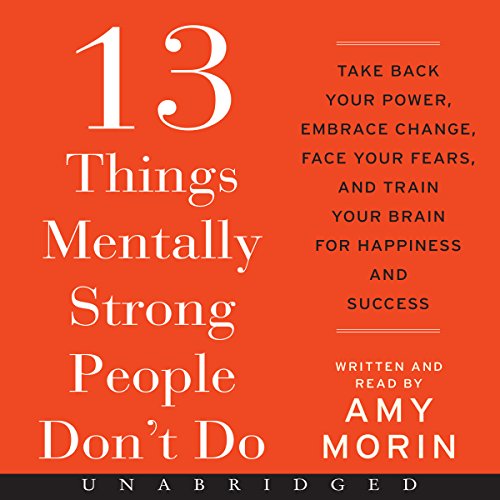 Everyone knows that regular exercise and weight training lead to physical strength. But how do we strengthen ourselves mentally for the truly tough times? And what should we do when we face these challenges? Or as psychotherapist Amy Morin asks, what should we avoid when we encounter adversity? Through her years counseling others and her own experiences navigating personal loss, Morin realized it is often the habits we cannot break that are holding us back from true success and happiness. Indulging in self-pity or agonizing over things beyond our control, obsessing over past events, resenting the achievements of others, or expecting immediate positive results all hold us back.

Now, for the first time, Morin expands upon the 13 Things from her viral post and shares her tried-and-true practices for increasing mental strength. Increasing your mental strength can change your entire attitude. It takes practice and hard work, but with Morin's specific tips, exercises, and troubleshooting advice, it is possible to not only fortify your mental muscle but also drastically improve the quality of your life.

The 13 things not to do are fairly obvious, like don't wallow in self-pity, don't dwell on the past, don't worry about things that can't be controlled, and don't worry about pleasing others. If you are wasting time doing any of these things, this book is a good reminder to let those things go. The book also offers steps to take to build a more positive attitude and gives examples of how other people have overcome their hardships. It starts off slow with the author talking about her own grief following the death of her husband (which felt like the beginning a long, sad story). However, it gets better after a few chapters.

Too many examples and references to pop stars - oprah, Madonna , judge Mathis. Give your readers a little more credit. If we want oprah let us tune in to her.

I didn't like the negative twist....I hesitated at the negative title, but gave it a shot anyway. I want to hear what Mentally strong people do, not don't do. My bad for getting it.

Her voice was whiny and difficult to listen to.

the author has a monotone voice. she should hire a narrator and it would be better

I found this so very depressing I couldn't take more than the first couple chapters. After awhile I just wanted to say to the author, "Oh, shut up! I can't bear to hear one more word about what strong, perfect people do!" I didn't feel inspired by this book. I felt crushed.

The narrator sounds like she’s asleep while she’s reading very monotone. Unfortunately I couldn’t keep listening to it.

Not quite sure what I was expecting to learn but this had even less. Remarkable that advice like be yourself and stay strong still sells books. Would not recommend.

What would have made 13 Things Mentally Strong People Don't Do better?

YET ANOTHER BOOK WITH ONLY 1-PAGE OF INFORMATION WRITTEN BY SOMEONE WHO CAN'T WRITEThis book is based on a successful list-meme (5 foods you should never eat, 10 things you should never say to your boss, 7 ways to get your dreamgirl, etc.) created by the author. So bravo for that. I don't begrudge her for that success. And I don't blame her for striking while the iron is hot and writing what turned out to be a best selling book -- brilliant move. That being said, Morin is NOT a serious writer. Precisely because this is an internet list-meme, the only way Morin was able to expand it into a book was to give each list item a chapter and expand each chapter with badly constructed list-like sentences and a couple of flat, unrelated and uninspiring examples of the chapter topic. Each chapter ends with an "exercise" to develop the skill needed to counter the bad habit that chapter covers. But the exercises are cliche and pathetic and god awful shallow. (Her cliche over self-pity is to "do some volunteer work...like donate dog food to an animal shelter or feed the homeless." That's really the most revealing that she has nothing to say.My hunch is that, since she's a trained therapist--and a very young one at that--this list was extracted from her study material and, because it's true, it struck a chord with the public.But her presentation of it is pure Facebook-post.Solution: This is an excellent OUTLINE for a real writer. She should hand it off to a ghost writer and turn it into a real book.

I don't know. Audible is churning out such crap lately that I'm returning 1 out of every 3 titles for a refund.

Would you be willing to try another one of Amy Morin’s performances?

She's a like, a valley-girl? And talks in list-intonation? Rasing her voice at the end of her sentences? And her sentencese are all simple and declarative? And, like, she goes on and on? For like, ever?After handing the book over to a ghost writer who will turn it into a real book, she should hire a real voice actor with the skills she clearly lacks.

If you could play editor, what scene or scenes would you have cut from 13 Things Mentally Strong People Don't Do?

I would reduce it down to 2 minutes and put it on a talking keychain to lift one's spirits as one goes about the day.

Having a good idea doesn't guarantee a good product. This was an obvious do-it-yourself job. It might do well, but will never be great.

Self obsessed and shallow

It just came across as a self obsessed young person trying to convey wisdom not yet obtained. Every sentence ws I..., I....,I. Me me me me me. Yaaaawwwn.

Great read, simple to the point

Very nice and easy to listen, practical advice. To the point without complicated theories, Love it. Worth the money