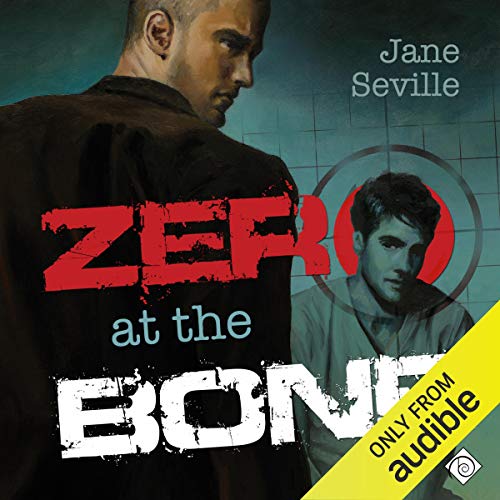 Zero at the Bone

After witnessing a mob hit, surgeon Jack Francisco is put into protective custody to keep him safe until he can testify. A hitman known only as D is blackmailed into killing Jack, but when he tracks him down, his weary conscience won't allow him to murder an innocent man. Finding in each other an unlikely ally, Jack and D are soon on the run from shadowy enemies.

Forced to work together to survive, the two men forge a bond that ripens into unexpected passion. Jack sees the wounded soul beneath D's cold, detached exterior, and D finds in Jack the person who can help him reclaim the man he once was. As the day of Jack's testimony approaches, he and D find themselves not only fighting for their lives...but also fighting for their future. A future together.

Loved it in print, love the audiobook

This is one of my favorite books of all time and it was wonderful to hear these characters brought to life. It has a 4.6 rating on Goodreads with over 4600 reviews, pretty universally loved in the mm romance genre. The narrator did a fantastic job and the story if first rate. The basic story is D is a hit man with a heart who is tortured by his past. Jack is a witness to a mob hit that D is sent to kill. Romance and adventure ensues. The writing is witty and engaging, I've read this book 3x. The only caution I'd give a listener is that I have been waiting for the sequel for years. The author has some pretty good freebies on her website, but not sure if the sequel will ever happen. That being said, still definitely worth a credit.

What would have made Zero at the Bone better?

A professional narrator! Not some kid who sounds like he just got out of high school.

Would you be willing to try another one of Alan Smith’s performances?

Out of a few thousand books I read in my lifetime. Zero at the Bone is one of my all time favs. But the audio version was a major disappointment. Actually was very angry that Dreamspinner couldn't cough up the money for a better narrator. I was at least expecting a more masculine voice. Not much difference in voice characterizations and even though there was emotion, it came off as whiny.

If you loved the book, Zero at the Bone, hold it close. Cause you'll no doubt feel like your best friend just died after listening to the audio.

Would you listen to Zero at the Bone again? Why?

I instantly fell in love with both of the main characters. Honestly, this book has quite a bit of sex but it isn't sex for the sake of sex. It served a purpose and told a love story. So, absolutely. I would definitely listen to this again.

The most interesting would be the entire premise, which is a hired killer unable to kill his target and then they have to run away together. Honestly, it was a good time. The least is the amount of sex. I'd say there's maybe one or two too many sex scenes. Other than that, I'd say the sex was there for a reason.

I absolutely loved Alan Smith as a narrator. He embodied both perspectives with devotion and I was captivated.

I never listen or read a book in one sitting. It's just impossible for me. However, it was a book that I continued to listen to without needing to switch over to a different book for a change.

I'm going to say this, because I believe it whole-heartedly. This is THE STANDARD when it comes to books with gay main characters. There has not been one book I've read/listened to before or after that has come close to impact of how this book made me feel for the characters and story.

Wish this was more than a gay romance novel.

I really enjoyed the parts of the book that weren't describing the gay sex. It was a great story. Very interesting and compelling. But I'm getting real tired of the fact that everytime I read a "gay" novel, it is practically all about gay sex and not the story. The narrator did a great job I thought in distinguishing between all the characters.

A Bone to Pick

Would you try another book from Jane Seville and/or Alan Smith?

I would like to read the sequel if Ms. Seville writes it. Mr. Smith's narrative skills are not to my taste. He's a bit wooden when emotion is needed an over zealous when things could be toned down. He reads like he was picked on to do it and just wants to get it over with.

It wrapped up ok. I would like to find out how they dealt with life afterward.

I absolutely adored this book. the story was well written. the characters were defined, lovable and annoying at times but great just the same. I loved d the most just because he was so delectably honory.

I saw a couple of reviews that talked about the love scenes and personally I think they are full of crap. I'm glad that the author concentrated on the plot characters and making it all seem realistic than making this about smut.

I really do hope there's a sequel.

It sorta fades out.

Many time, I've wanted to know what happens after. Some stories end too soon, and you're left wondering what happened next. This one, suffers the reverse. A brilliant story, well written, expertly performed and a joy to listen to. The plot wraps up, and then it goes on. And on. It would be improved by dropping the last two hours of the book.

All that said, it's more than worth a credit. It's great and I look forward to more from the author.

Smith’s voice is satisfyingly resonate to this genre of book. Over all he does an excellent job and keeps the two main characters voices separate in his performance.

I read/listened to this book on my Fire tablet three week ago and I am still thinking about the various plots and sub plots leading to resolution of the mystery. This book, at its heart, is about a paid assassin with a conscious, who is being forced to take a job he would normally pass up, because of said conscious. Obviously rather than do the job, at the last minute the assassin refuses to kill the mark, Jack, and become his protector.

Jack is a high value innocent whiteness to a gang murder. The government has been unable to keep his pretrial location secret from D, the assassin, and Jack rightly determines that D is his best hope for survival.

D is a complex mystery that Jack needs to unravel to ensure his survival. In piercing the vails of mystery surrounding D, Jack begins to trust, and then be attracted by the man behind the surface of D. The author does this in a paced human way; not Stockholm syndrome at all. All this poking and prodding by Jack awakens the deadened emotional man in D that he had imprisoned to do his job as an assassin, to the deserving bad guy.

The concept of assassin to the deserving was a very interesting literary concept. A lot of people are repulsed by villains to smart, rich, or powerful to be held accountable for their actions. The idea that one can employ someone to provide the ultimate sanction to a deserving villain is an attractive one.

The clever mystery reader may figure out who is manipulating D to go after Jack, the innocent, but they will have to wait until the end before the why this manipulation occurred is revealed. Along the way there is a subplot of a “Mr. X” that appears to be helping D and a why Mr. X is helping for the reader to figure out. The answer of why turns out to be good karma paying back D for having a conscious in the way he applies his trade.

Solving the mystery of D through Jack is a completely enjoyable experience. It is a great thrill ride of dips and hollows that makes ones stomach drop and twist like a roller-coaster. It is a great literary ride made all the more enjoyable by some of the best believable couples dialog I have read in a while.

The transformation and reclamation of D to recast him as the good guy he has always been deep down, is satisfying esthetically. However, I do not think that this book’s end could have occurred absent a Presidential appointment. This, in my opinion, is the plots one flaw.

When I read / listened to this book I was on vacation at an adult only resort in the Caribbean on the beach. The book holds enough interest so you are not distracted whether you are confronted with trying to figure out if the topless fauna are real or medically augmented or whether the budgie smugglers holds a balled up pair of socks or an anaconda. But hay if you are listening to the book you can solve both mysteries and miss nothing. GRIN

This was a good listen for me. I liked the narrator's voice but I had a little trouble with the speed. Had to listen at 0.90x when I normally listen to books at 1.20x or above. So, there's that. However! The voice for D was f***ing hottttt!! Had me flushed every time he made that grunting sound....I felt like a schoolgirl with a crush 🤭

Hitmen/hit-women, the struggle between right and wrong plus the love of a brave doctor will keep you captivated until the last page!

Felt like there was more story to be told for D and Jack, I am hoping there is a second book!

This book is worth the credit, enjoy!