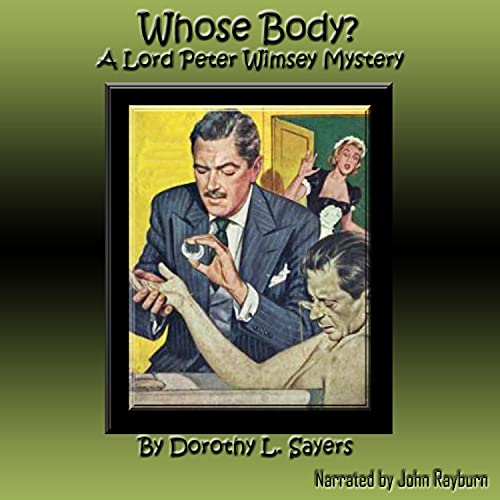 This is the first story written about a man who became interested in criminal investigation as just a hobby. It came as somewhat of a surprise to him when it became an occupation. This was Peter Wimsey, referred to as Lord Peter because he was the younger son of a duke, justifying the courtesy title. He didn’t have a right to sit in the House of the Lords, but that didn’t seem to matter among his friends and associates.

This initial disclosure of his activities began when a man’s dead body was found in a bathtub in a London flat. He was nude and wearing only gold pince-nez glasses on his nose. The body was first thought to be well-known financier Sir Reuben Levy, who had disappeared overnight. There was a resemblance, but it was quickly discovered he wasn’t the victim, even though he was still missing.

There was a teaching hospital nearby, and suspicions were aroused that the corpse may have been placed as a prank by medical students. That, too, proved erroneous when respected surgeon-neurologist Sir Julian Freke disclosed no body was missing from the dissection room.

The lack of information brought Scotland Yard Inspector Charles Park to the investigation, and he welcomed the assistance of Lord Wimsey. It was three years before another book about Lord Wimsey, but author Dorothy L. Sayers eventually turned out 10 more stories featuring him. We listen now to the original effort.