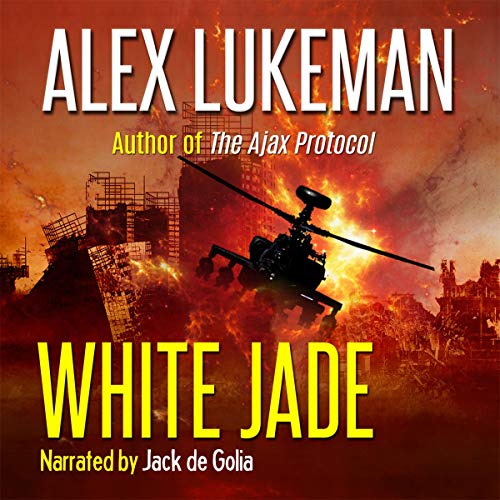 White Jade is a fast-paced thriller that spins a web of deceit and murder across the globe, featuring characters caught up in a deadly international power game.

Former Recon Marine Nick Carter works for the Project, a covert counter-terrorism unit reporting to the President. He's taciturn and tough, with a dark history of emotional and physical scars. Selena Connor is a beautiful, strong, and skilled linguist. When her wealthy uncle is murdered by someone looking for an ancient book about the elixir of immortality, she's thrown into Nick's dangerous world.

Nick is assigned to protect Selena and help her recover the missing text. The search escalates into a life and death adventure reaching from the gold country of California to the high country of Tibet, from Washington to Beijing. Along the way Nick and Selena begin a relationship forged by danger, combat, and betrayal. Someone is out to take over China and attack America--and Nick and Selena are right in the line of fire.

International intrigue, terrorist acts, romance, patriotism, and the threat of nuclear war form the core of the book, the first volume in a series featuring Nick, Selena, the Project and the ongoing, complex relationship between the main protagonists.

White Jade is an excellent espionage thriller, but it had the potential to earn 5 stars and the author failed to deliver. Specifically, he gave the plot away leaving little suspense for the last half of the book.There is almost continuous action, well developed and likable protagonists, really evil antagonists, and a somewhat credible story line.

A wild ride from begining to end!

OMG Yes! This is one awesome story! Action packed suspense thriller mixing past present & future along with mystery & terrorism!

What other book might you compare White Jade to and why?

I don't like to compare books normally as people judge the book you compared it to unfairly, but this is like Indiana Jones meets Mission Impossible! Super exciting, never a dull moment. Pay attention or you will miss something!

What about Jack de Golia’s performance did you like?

I loved Jack's ability to do so many different voices! He was on spot all the way thru this book making the book very believable! I could close my eyes while I listened & picture this happening in a movie.

WOW, this whole book was incredible! Never a dull moment in the book. It was dangerous, exciting, scary, adventurous, mysterious & suspenseful along with disaster, espionage, thrills stacks upon more thrills! Incredible!!!

Hooks & Keeps You on the Line

What did you love best about White Jade?

Jack DeGolia does a fantastic job interpreting White Jade, capturing the essence of the characters. Alex Lukeman's story keeps listeners on the edge, waiting to hear what's next in store.

What was one of the most memorable moments of White Jade?

When they were in Tibet -- that whole segment of the book

Hard to chose a favorite, but I loved it when Selena saves the day. She is a strong female character who doesn't need a knight on a white horse -- she can hold her own.

The book was great, interesting and enjoyable to listen to thanks to the Narrator!
I highly recommend it, and look forward to continuing to listen to the series.

I liked this story.It had potential to be better, more cohesive,but for a first in a series,it was good.It was full of action.The characters were likable. Jack de Golla was a fine narrator. I was given this free review copy audiobook at my request and have voluntarily left this review.'

The story was ok but trite. It is very predictable, like you have read it all before.

All of my favorite tropes

Interesting characters, an intriguing government agency, and a plot for world domination. It had many of the tropes that are time tested fan favorites. All tallied in the end, it made for a fun read.

I was really looking forward to starting a new series but I can't even make it through this first book. The story is really basic and poorly written but the real problem is the narrator. I feel like Mr Rogers is reading an action/adventure story. Happy and light with sweet sounding female voices. Yuk. I can't finish.

This was my first Alex Lukeman novel and I really enjoyed it. The action and intrigue were riveting but the additional detail given to the archeological aspects of the story were very interesting as well. I loved the diversity of characters, too, and highly recommend this novel.