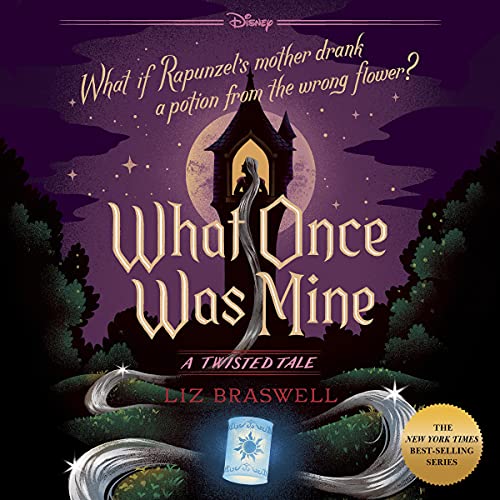 What Once Was Mine

The 12th installment in the New York Times best-selling series asks: What if Rapunzel's mother drank a potion from the wrong flower?

Desperate to save the life of their queen and her unborn child, the good citizens of the kingdom comb the land for the all-healing Sundrop flower to cure her...but someone mistakenly picks the blossom of the Moondrop instead. This shimmering flower heals the queen, and she delivers a healthy baby girl - with hair as silver and gray as the moon. But with her mysterious hair comes dangerous magical powers: the power to hurt, not heal. For the safety of the kingdom, Rapunzel is locked away in a tower and put under the care of the powerful goodwife Mother Gothel.

For 18 years Rapunzel stays imprisoned in her tower, knowing she must protect everyone from her magical hair. When she finally decides to leave the only home she's ever known - to see the floating lights that appear on her birthday - she gets caught up in an unexpected adventure with two thieves: a would-be outlaw named Gina and Flynn Rider, a rogue on the run. Before she can reach her happy ending, Rapunzel learns that there is far more to her story, her magical hair, and her future than she ever knew.

For more twisted adventures, try the other books in the A Twisted Tale series:

Ce que les auditeurs disent de What Once Was Mine

On page 146- 148 is not read. I listen and read together and those pages aren’t in th audiobook

It's a story that a brother is telling for his little sister (who is going through chemo).

Honestly, I feel like this one understood the heart of the story best. The others seem to mock a lot. This one felt very . . . Glen Keane, at the heart. Glen was the heart of this story, and just . . . little moments seemed to practically quote his thought process of Tangled.

I ABSOLUTELY LOVE THESE "TWISTED TALES"!

So far, I've listened through "As Old As Time," "A Whole New World," and finally got to "What Once Was Mine." All I can say is all of these books are absolutely superb! amazing storytelling that also speaks to many of our current day issues. I love how each story tends to add a facet or two of character development to these very classic Disney characters without losing the Disney "magic" of the original movies. Liz Braswell does not shy away from having our heroes ask difficult questions too. I also liked the facet of the story within a story. This aspect was not in many of the other stories that she's previously written. Nice touch. I truly have left these books hungry for more! Can't wait to read the next one!!

If I may, a note about the voice actress/ reader: Rachel Kimsey, As I said earlier, I've read through a few of these stories and have to say, very few of the readers have really understood the Prince or Princess's voice as much as this storyteller got Rapunzel's. Not only did I feel like I was listening to The real Rapunzel figuring things out as she went along, but, Rachel truly encompassed the princess's over enthusiasm at all life outside her tower. thank you for a truly great read!

My favorite Disney Princess is Tiana and when I found out about this series i knew I had to buy it! It was perfect and exceeded my expectations:)

The story was amazing, but some of the story is missing and cut off.

What a thrilling take on Rapunzel! The narrator completely captures the essence of the story . Medieval characteristics are included smoothly and the writing is so beautiful and endearing.

Story is fantastic and voice actor is amazing. Definitely worth the credit. I highly recommend this story.

I loved the story! I was slightly hesitant to purchase a Liz Brazwell because I had a hard time reading her beauty and the beast, but she did a wonderful job on this story. The imagery is perfect and you just fall in love with the characters and their humor. Overall, I loved the story and the creativity by Liz Brazwell, and highly recommend this book!