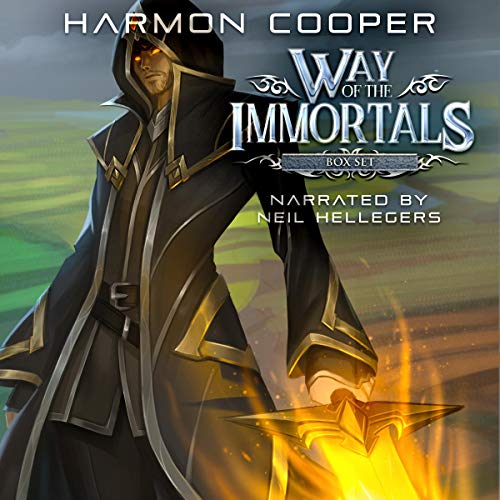 Way of the Immortals Box Set

Fall in love with all three Way of the Immortals books in one easy box set!

Dragged into an unknown world by a dangerous portal, Nick Barnette and his friends get torn from their lives. Separated and disoriented, Nick is pursued by powerful forces he doesn’t understand before he can even catch his breath.

Discovering a powerful but unreliable ability, Nick must cultivate this new strength in order to reunite with his friends and get them all home. All while fighting for his life at every turn.

His quest will take him all across this treacherous world, from the forests to the mountains, across deadly deserts, and perilous seas.

Bringing a fresh perspective to the Kingdom of Lhasa, Nick might be the most unconventional hero this world has ever seen - and the entrenched powers-that-be are definitely not going to let him run unchecked.

Way of the Immortals is a fast-paced cultivation series weaving Bhutanese and Tibetan lore into a novel that xianxia, wuxia, LitRPG, and progression fantasy listeners will love.

So, let’s be clear I don’t think or say this often, but this is just pure trash. I don’t get it how someone think this is going to be a good book. The MC Nick is soooo weak it’s unreal. This man gets tricked over and over and over until it becomes a running joke in the book, but still falls for it again. He is raped and doesn’t look to go back and get revenge, he’s locked in prison and then tried to help the people who locked him away. Even after he’s told that he was just being strengthened to be used for his power by the temple master. This is just trash, move on and listen to something else. I have and I am getting my credit back because this isn’t worth the time.

I enjoyed it, but this is kinda rough

I did enjoy the series, but it has a lot of issues, so if you can deal with them I recommend it.

The MC is handed almost everything on a silver platter. He is constantly saved by others, handed ultimate power, and although he goes through hardships, he doesn't expend any real effort in comparison to the standard of this genre. Actually, I really wouldn't call this a wuxia story, and more of just an isekai, with many of the same tropes and cliches. The MC is OP, but pretty much doesn't display that whenever the plot needs him to be a victim again. He trains as a monk, but freaks out over every single situation. It is pretty inconsistent in how he acts. The bad guys are bad, because they are bad. Every single one. Finally, the story goes down hill pretty significantly after the first book.

The supporting cast is pretty awesome. In my opinion, they overshadow the main character, show more growth than he does, and are just generally more interesting.

I like the series as I said, just don't think to hard while you listen and you should enjoy it.

I really love this series so far. The writing is great. The narration is perfect. The endings of all three books are weak, but having them together negates that, as they all run together. I can not wait for more in the series.

Harmon is a great author and really churns out some quality stories. This is another good book from him with a flawed MC and really fun and interesting side characters. He wastes no time portaling the MC and his "friends" to this world which I appreciate. This isn't anything like his CBG stories and has hardly any sexy time in it.

Great bang for your credit

Great story leaving you wanting more. Give me more and more! You won’t be disappointed at all.

Loved it through and through. I truly had fun listening to this one. First read for the Audible app. I will definitely be reading more of your work.

always a fan of cultivation so I liked the story. worth the credit for sure.

I loved this series - the way the author paints the pictures of the various regions, the character development, the spiritual aspect - all top notch. A completely entertaining story that I could not put down. I really hope he writes another book(s) in this series!

Great story! It took a little time to get into, but once I was past the first chapter, I was hooked!
The characters pull you in that you are on the edge of your seat to see what happens to them. And more often then not I was laughing at the banter.
Excellent writing and I can’t wait to see what happens in the next book!
Last, but certainly not least, Neil does an amazing job. I do enjoy his narration.