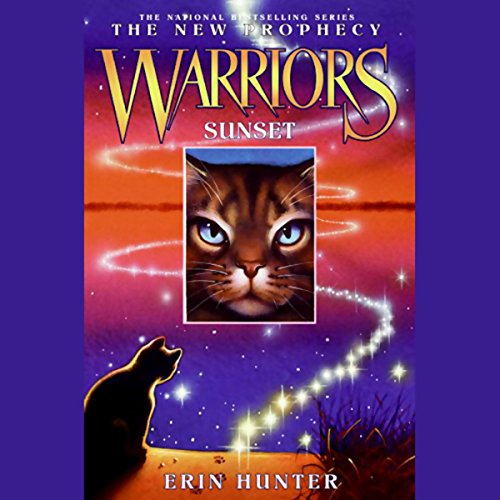 Before there is peace, blood will spill blood, and the lake will run red....

In Book Six: Sunset all the tensions the Clans have faced in their new home suddenly explode into battle, and a young hero faces a life-changing choice.

Love this series, Love this Author!!

When I started this entire series, with the entrance of Rusty, or Firepaw, I had my doubts about it. It took me a while to get to know all the cats and clans, but once I got a grip on the storyline, I was in love with the ideas of the four clans, their warrior codes and warrior ways of life. The stories told from the Thunder Clan cats views brought to me a wonderful new experience for my imagination, and quickly swept me away into their forests!

The books are easy to read once you understand who and where every clan cat lives/belongs. The Thunder Clan, River Clan, Wind Clan, and Shadow Clan's ways of life will imediately capture the heart of anyone of any age. I am going on 30 this year, and my imagination and love for reading keeps me hungering for more wonderfully written stories such as these. I totally intend to share these books with my children once they've learned how to read as to help their imagination grow even further.

There is some violence in the series, and it is very descriptive, but I wouldn't keep anyone from reading it! I'm hooked, and I hope everyone has a chance to read this series, no matter your age! Happy reading!

Thank you Erin Hunter, I love you books and look forward to sharing them with my friends and family!!

The Warrior Books are Truly Amazing!

When I first started reading the Warrior books they were just so good , the wild side of books. I was so excited to read Twilight the 5th book of this series and to be honest I love to hear the book but I understand it better when I can read the book. It's just hard to stay on focus and I wander a bit. But I got the free trial and I had to deal with it. But I do advice to listen to this , and I only heard 3 chapters and I already love it!

I have the book, but listening to it makes me feel like I'm actually there. It's amazing!

Well written good characters interesting ending for this series. This is a good book. I recommend it to young readers who like animals and fun to follow along stories. Has a realistic and fantasy which is a nice combination.

I love it but where is power of 3 the sight

Did it meet my expectations?
Yes it did. I was very pleased with the preformence.
I was wanting this one for ages and when I got it I was so happy.
I loved it because I had read the book before. It still took me be surprise! ⭐️⭐️⭐️😄🐈

My 10 year old stepdaughter adores these books, so we listened to one of them in audio format during a long drive this summer. The world is interesting, a world of anthropromorphized cats, with different clans in different wilderness areas (River clan, "Tribes" in the mountains/desert, Thunder clan in the forest, etc.) as well as "kitty pets" that are cats kept by humans (Two Legs), and "rogues" - loner cats without a social community. Each clan or tribe has elected leaders and appointed deputies, familial links (including male/female long term mating pairs, which is not really true in the feline world where male cats do not raise their young), and a "medicine cat" which serves as herbalist doctor. The Medicine cats also have psychic links to "Star Clan", which is the mystical but interactive clan of the deceased ancestor cats that oversees the living clans and offer guidance and help via dreams with the medicine cats. The Star Clan serves as a sort of religion in this world, but they are not gods and are respected but not worshipped.

The bulk of the tales deal with the interpersonal interactions between the cats - rivalries between clans over boundaries, issues of loyalties within the clan, romantic feelings between cats, power struggles and competition between individuals, and inter-clan cooperation. This is a book in the middle of a large and sprawling series, but I was able to understand the cat-centric terms and understand the world well enough. The themes of romance, power struggles, survival from threats in the natural world, and loyalty are universal and human. Death comes to some characters, and is handled reverently but matter-of-factly.

I personally found the contrivances of the cat terms (New Leaf for spring, Two Leg Monster for cars, etc.) a bit annoying. The names of the cats seemed juvenile and overlapped confusingly (Squirrel Flight, Leopard Star, Dark Star, Bracken Fur, Squirrel Fur, Bramble Claw, Dust Pelt), but my daughter found them amusing. There was far more romance in the story than I know exists in the cat world, which felt artificial and irritating to me. I am not sure how I feel about the Star Clan and the theme of reincarnation and ancestor interference with current events. The story is pretty predictable, but then this is a middle-grade book. At least it attempted to teach lessons about loyalty and doing the right/honorable thing. Overall, these books are ones I am happy to have her reading but I would not consider them up to "all ages enjoyment" level or "classics" (Narnia, Harry Potter, Rats of NIMH, etc.)

The audiobook narration is ably performed by Nannette Savard.