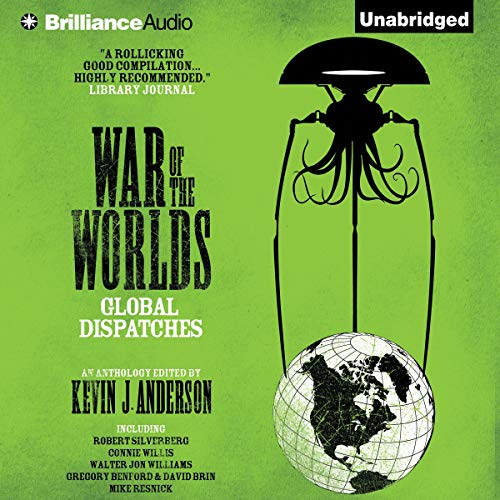 War of the Worlds: Global Dispatches

Nineteen gut-wrenching reports from the front lines of the War of the Worlds, as logged by Albert Einstein, Mark Twain, Theodore Roosevelt, H.P. Lovecraft, Winston Churchill, Jules Verne, and many of the other most famous writers of the time. The most popular and acclaimed science fiction writers of today relive the Martian invasion through the eyes of their famous predecessors.

"Sometimes slapstick, sometimes thoughtful, the book's delights are really too numerous to describe in detail." ( The Valley Times)
"Fun all the way through...carried out with both a respect for Wells's great work and a sense of humor about its own purpose." ( Asimov's Science Fiction)

Chronicles of the Classic Invasion

For those who love the classic tale by H.G. Wells, this book expands the story with personal accounts from some of the most famous historical personas of the age. From Teddy Roosevelt and Albert Einstein to Jules Verne and Leo Tolstoy, the Martian invasion is given new life for fans of the classics. The caveat, of course, is that in any short story collection, some stories are better than others, and with the similar theme revolving around the one story, most of these tales will run together if you breeze through them. This is a collection best taken slowly, a story or two at a time.

As a fan of the old pulps as well as the original tale that spawned this collection, I have to geek out a bit about the story from Edgar Rice Burroughs. I give no spoilers on how it works out, but suffice it to say, we get to see how these Martians relate to the very different world of John Carter.

All in all, this collection is greater than the sum of its parts, for by the end of it the invasion truly encompasses a far larger scale than the glimpse Wells first gave us over a century ago. For fans of the original, this is a gateway to discover some modern writers. For new fans, this is a great way to discover the original by means of a back door. It's a win-win.

MacLeod Andrews is phenomenal in this audio version. Some of his voices are perhaps a little stereotypical, but there are times I had to remind myself that all of this was the work of one narrator. For a collection capitalizing on the idea of many writers offering many different historical voices, such a narration is not only worthy, it's required.

Surprised by how much I enjoyed this.

I don't usually have any interest in compilations, but this one really works because of the the common narrative. Cudo's to MacLeod Andrews for a stellar performance! I had to check a couple of times to be sure there weren't multiple readers in the credits. Of all the stories, the only one I couldn't listen to was the Burroughs John Carter of Mars story. Just couldn't do it. What really impressed me was the authors abilities to really emulate the historical figures they embodied in their stories. I highly recommend this book.

POCKET SPITTOON
Some of you may think it was H.G. Wells that wrote about the invasion of London by Martians. Now finally the truth has come out and we find that Henry James actually wrote the book. You already know about the attack of London and of the attack in New York City as broadcast by Orson Wells. You may know through the 1953 movie about the attack in California. In 2005 we learned with the help of Steven Spielberg and Tom Cruise more about Brooklynn, New Jersey and Boston. What a lot of people don't realize is, that the Martians attacked the entire planet, it was a Global Invasion. Thanks to a list of great authors these reports have come out of hiding and are in this book. We get to hear about the attacks that took place in China, Paris, Texas, St. Louis, Alaska, Russia, Africa, Cuba and others. We get first hand reports from the Dowager Empress of China, Percival Lowell, Jules Verne, H.P. Lovecraft, Teddy Roosevelt, Winston Churchill, Pablo Picasso, Henry James, H.Rider Haggard, Albert Einstein, Rudyard Kipling, Edgar Rice Burroughs, Joseph Pulitzer, Leo Tolstoy, Mark Twain, Joseph Conrad, Jack London and Emily Dickinson. Many of these reports were discovered by famous writers of today, such as, Connie Willis, Dave Wolverton/David Farland, Gregory Benford, David Brin, Allen Steele, Robert Silverberg, Walter Jon Williams, Kevin J. Anderson, Mike Resnick and others.

HE HAD THE KIND OF FACE YOU COULDN'T HIT JUST ONCE.
Don't let the rating fool you, this was a fantastic idea for an original anthology. Present day writers writing as past writers. Spanning the globe to tell the story in slightly different ways. Like all anthologies some of them you will like and some you will not. If you don't like Robert Silverberg or Henry James, you may not like his story. On the other hand if like either one you may love it. My favorites were Walter Jon Williams writing as Dowager Empress of China, Mike Resnick as Teddy Roosevelt, Kevin J. Anderson as Percival Lowell, Robert Silverberg as Henry James and Greg Benford and David Brin as Jules Verne. My favorite part about Jules Verne was his comparison of his work to H.G. Wells. There were more clunkers then I would have liked, but I was still in love with this whole idea of writers writing as writers about such an event. Hopefully there will be future anthologies that are similar. Maybe a second invasion in the fifties. We could hear from people like James M. Cain, Ray Bradbury, Isaac Asimov, Robert Heinlein, Humphrey Bogart, John Wayne, Elizabeth Taylor, a young John F. Kennedy, etc...

I have heard MacLeod Andrews narrate before, but I never knew the extend of his talents. Each story sounds different and it is hard to believe only one person did all the narration. His talents made the overall experience that much better.

The story is an original concept and a worthy companion to Welle's novel. Each narrative in the words of a contemporary person of note is very well done.

Great stories inspired but Was of The Worlds. the Haitians are terrifying. this collection of stories is a fantastic what if.

A couple of the stories were great, but the uneven quality and the jokey tone in some stories made for a poor overall experience.

I enjoyed the conceit of famous historical figures experiencing the Martian invasion around the world. Picasso, Verne, Twain, and my favourite, Emily Dickinson (as interpreted by a foot noting grad student). Narration was varied and excellent.

Most of the stories in this book were a joy to listen to. The Chinese one and the Jules Verne one were my least favorites. The Texas Ranger, and the Teddy Roosevelt ones were my favorites. Overall it was a very entertaining book. Give it a listen!

Would you consider the audio edition of War of the Worlds: Global Dispatches to be better than the print version?

I haven't read the print version, but I'm very impressed by the reader. The variety of styles and voices necessary to read these stories is immense and though he doesn't always quite get it, he's an accomplished reader and fun to listen to.

What was one of the most memorable moments of War of the Worlds: Global Dispatches?

I love the Texas Rangers story, just brilliant, as is the "John Carter" (Edgar Rice Burroughs homage) story, though sadly truncated of necessity. It would make a great book in itself.

Though his best stories are the American ones, he does a fabulous job with the dizzying array of voices necessary for these diverse stories.

This book didn't start off on a strong footing to my mind. I was ready to give up until Night of the Cooters. After that I thoroughly enjoyed a majority of the stories with Einstein's and the 2nd last being stand outs. It does end (excluding the wrapper arc) on a jarringly different story and while amusing I felt that maybe it would have meant more to someone with a fine arts degree rather than IT. I'm pretty sure it was loaded with inside jokes that would have enhanced it had I a more "cultured" literary taste.

I will say however that the narration is spectacular, McLeod Andrews does an amazing job of convincing character voices. I was certain there must have been other narrators at points! He is definitely one of my favourites and was a pleasure to listen to.