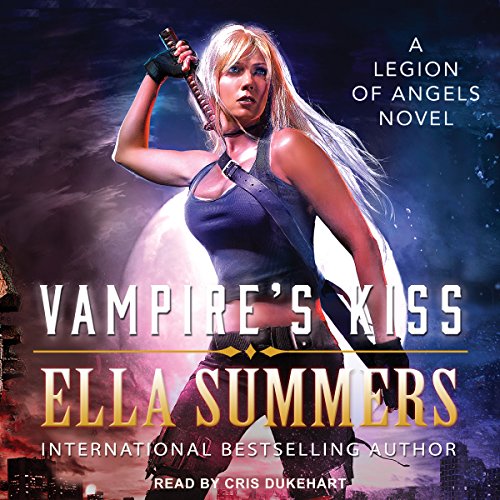 Leda Pierce is working as a paranormal bounty hunter on the Frontier, the dividing line between human civilization and the plains of monsters. Life is simple and the pay modest, but at least she has her family. That is, until a vampire hunt goes wrong and her brother goes missing, captured by the dark angels of hell.

With no magical powers of her own and no way to find him, Leda's only option is to go to New York and join the Legion of Angels, an elite unit of supernatural soldiers with powers gifted to them by the gods themselves. If she can survive long enough to make it up the ranks, she will gain the magic she needs to find her brother.

But Leda soon finds herself on the wrong side of a conspiracy that will shake up the supernatural world - and at the mercy of a fiercely powerful and tempting angel.

Is anyone "human"? Not in the actual sense of the term but emotionally? None of these characters are "people". Her brother gets kidnapped in answer to this the heroine joins the military to get stronger. But she also goes to at least two clubs to have fun, has time for hurt feelings over guys, and has picked a path that will take time to climb up the ranks before she can even go find him. What?! Why are there no deep periods of inner turmoil that she is leaving him to a possibly horrible fate while she eats and sleeps in comfort?

Don't worry it's not just her though. Any character that is on screen for more than 2-3 chapters is an emotionless monster. Like the childhood friends that join love each other but are blind to the fact that they like each other back. Sweet side story? Nope. The girl proceeds to dance with 3 guys and allows one to sensually feed her drugging drops and make out. Think that's the moment they are spurred to the next level? Nope, he wasn't there to see it and it is never mentioned again. Why is it even written? The only character with real depth was Harker and we aren't supposed to like him.

The heroine also jumps to correct conclusions with little information; Higher ranking competent officers telling her classified information just because or how they in their years of experience and caution didn't see the setup that this rookie did. The breaches in protocol for no reason; Perhaps writing about the military without applying research was a bad plan. The fighting scenes seems to have been constructed by someone who either doesn't know what they are doing or by one who assumes you can fill in the parts that were skipped so we can get back to the story.

Oh wait I didn't talk about the narration yet. An emotionless book deserves emotionless narration. Even the parts that required "yelling" were said in the same flat tone. I could pick up slight differences between male and female voices; good job there. Her voice did put me to sleep no less than four times so....

Good but a little too YA

Reminds me of Divergent only with a paranormal slant and the added layer of the missing brother. I expected a little more but was slightly disappointed with the ending. It wasn’t a cliffhanger per say it was just flat and a little anticlimactic. The romance is also about a 3 on a scale of 1 to 10 which again is much more for the YA audience than those that prefer a mature romantic story.

Tapped out in Chapter 10

Narrator is good. But… I have a LOT of problems with the “good guys”.
Blind obedience? Nope. The trainers need to earn trust and haven’t.
Training that straight up kills half? No. Figure out a skin test or something else non-fatal. The current test is wasteful and evil, as is not allowing candidates to tap out.
Training that hurts people just to hurt them before sending them into combat they are not briefed on or trained for? on the 2nd day no less? Nope.
Training that disallows winning “incorrectly?” Nope.
Sleep deprivation because “you won’t get sleep in battle?” Nope. Sleep deprivation prevents learning so it is the opposite of training. Even Navy SEALs only do it in very circumscribed circumstances after weeks of training & know it will happen. Whatever this training is? Just no.
Playing trainees off each other and allowing bullies? Nope.

Just because people can be magically healed does not make purposefully hurting trainees ok- especially since it’s known that not everyone will heal. That’s just fully unacceptable. And as you can see from above, it happens over and over and over so this book is not for me.

What is good is the plucky heroine (except for her decision to go rogue) and her found family. The author made some characters I already want to care about. The prose and pacing are good. If I didn’t hate *all* the decisions being made by those in power who are supposedly good, I’d probably read on. But this is too toxic for me.

Cute, But not Buying It

I think this is an interesting premise, but it is written very much like the main charter is a teenager. Some of the characters are way over powered, but then the lowest of the low can take them out. Of course that leads our heroine to dramatically save the day.

I will be returning this book and not continuing the series.

Book 1 of this series was borrowed through my Audible Escape plan.
The series has some potential but book 1 feels abbreviated, like the story was cut short. Is over-serialized a word? If book 2 was available through Escape I would borrow it, but I’m not spending the cash to buy it. Too bad, as book 2 often realizes some of the potential of a storyline and can decide your purchase of the rest. Book 1 tends to be weaker as the author spends more time on giving readers background info. I’ll give Book 4 a chance as that’s available to borrow. Why only 1 and 4 of the 8 books are in the plan only Audible knows.
The Publisher’s Summary gives just enough info for the background of the author’s created world.
Dukehart has a fairly pleasant voice that sounds between older teen and young woman, which works for our 22 year old heroine.

I never reread books that I’ve already read once but with this series , I can reread it anytime! I’ve always loved this series and can’t wait for the next book!! Perfect 10 for me!

Truly a terrific book that I did not want to stop! I can't wait to start the next one!

This is a great series. I have read them as they came out, no listening to them has been very exciting.
This series is a lot of attitude and action with feeling smoldering in the background. I love all the characters.
Can't wait to start the next book.

Great start to a new series

Ella Summers does a good job of illustrating the dystonia world in which the story takes place. Monsters overrun the earth and then gods stepped in to help. Many of the cities were destroyed and the remaining cities were walled off from the wasteland of monsters. The gods gave them magic and many paranormal creatures. At the top of the hierarchical were angels.

The book starts with illustrating a problem that is happening in the bounty hunter community
Leda Pierce does not have an obvious magic, but she does have a mouth and attitude. She is a little stronger and faster than others but she is all human. She is the older sister (3 sisters and 1 brother) that was brought together by her Callie, her adopted mother. The rule is that they watch out for each other. When her brother is kidnapped, Leda is forced to make a life changing choice. She needs that the skill of an empathy so she must- join the Legion of Angels.

To become an angel requires strenuous life threatening training and drinking the nectar of the gods. The training recruits has all the social norms for any newbie. There is an elite group, who are progenies of the gods, who scorn the others.

As a bounty hunter, Ledia has skills to get the job done, a respect for life and how to be a team player. The manner in, which she does the job is not necessarily in the manner of an angle, but she gets results when others don’t. That presents a conflict with the other recruits.
Service to the country, to eradicate monsters are the reasons for joining the legion. That is the reason Ledia regurgitates, but her real reason is secret, and it presents a conflict with a particular angel – Nero.

Building the conflict and chemistry building between our future lovers begins from the moment Ledia applies. She has a secret and he wants to know it. What put her on his radar we never know. What we do know is he does what to know her secret.
Their relationship follows the prescribed girl meets boy rules. The challenges of which personality will give to the other; respect from life-saving situations; an understanding of their motivations, and bonding from admiration.

The action is nonstop and dialogue is entering.
This is a cliff hanger with a few subplots. Why is she “special”? Why/who want Ledia’s brother? Who is pulling the strings on the vampires? Oh, when is Nero going to jump Ledia’s bones? The only thing that is settled is Nero knows her secret.