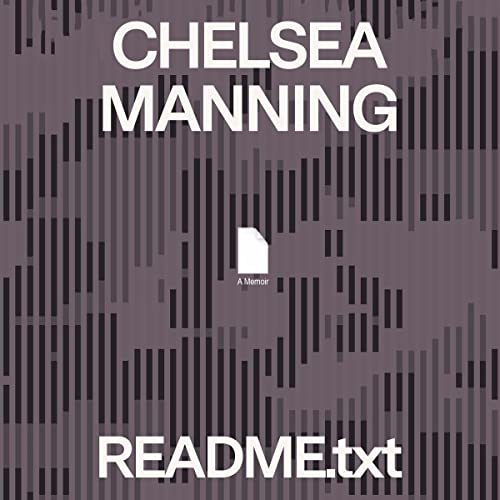 An intimate, revealing memoir from one of the most important activists of our time.


While working as an intelligence analyst in Iraq for the United States Army in 2010, Chelsea Manning disclosed more than seven hundred thousand classified military and diplomatic records that she had smuggled out of the country on the memory card of her digital camera. In 2011 she was charged with twenty-two counts related to the unauthorized possession and distribution of classified military records, and in 2013 she was sentenced to thirty-five years in military prison.

The day after her conviction, Manning declared her gender identity as a woman and began to transition, seeking hormones through the federal court system. In 2017, President Barack Obama commuted her sentence and she was released from prison.

In README.txt, Manning recounts how her pleas for increased institutional transparency and government accountability took place alongside a fight to defend her rights as a trans woman. Manning details the challenges of her childhood and adolescence as a naive, computer-savvy kid, what drew her to the military, and the fierce pride she has about the work she does. This powerful, observant memoir will stand as one of the definitive testaments of our digital, information-driven age.

A Macmillan Audio production from Farrar, Straus and Giroux.

A enjoyment to listen too

A pure pleasure to listen to Chelsea tell her story. I wish her well and hope to read more about her life after prison.

I don’t know what I was expecting…thought it will be more…might had been limited with what she could shared…little shocking with what goes on behind closed doors…I’m going to leave it at that…..

We should all be lucky that someone as brilliant as Chelsea Manning exists. I'm so glad she wrote this to tell her story in her own words.

this is a story that deserves to be told because one of the most iconic and important people of our generation has, until now, been rendered in the popular press as a two-dimensional character... her whole life, from start to finish, includes important lessons and surprising revelations. each chapter deserves to be experienced and digested.

Incredible story of resilience and courage. A piece of our history through

What a horrific and prolonged journey of pain at the hands of authority figures and of corrupt systems. So lucky to hear it from the authors voice. Chelsea was clear and composed as her story came alive, I felt transported to the war zone, the solitary confinement, and all the misgendering moments. Grateful for her bravery and self-determination.

This was a great book and an amazing storyline. It’s wild that in 2020 this was still going on. Happy that it’s over for her meaning her time in jail.

For the audio version of this book, Manning should have been coached to record over a longer period of time and with more feeling than was encouraged as her reading progressed. Compare chapter one’s silky smooth voice to the last chapter’s scratchy and strained efforts leaves the ending of the as tired as her voice. Voice work is not easy and she managed to get through it, but the quality of the audio suffered for a lack of proper coaching from the production team. The story is an important one and well told. Worth the read/listen.

Her story was intriguing, but with this “eye opening” info, it’s sad that Chelsea had go through these things. And, you know who’s, administration wanted to make an example of punishing her. Thank you for the info.

Interesting story but Chelsea's narration is definitely lacking. Her inflection is almost always the same no matter the content. Very chipper with an upwards inflection at the end of almost every sentence. No emotion in the reading or performance. Still a good book overall but the reading doesn't do it any favors.

Powerful endurance and teachings to all of us

Great story to learn more about many aspects! Hope the future holds a better place for everyone

An important truth that needed to be told

I always wanted to understand why those who report war crimes are getting prosecuted instead of those committing them. Chelsea's biography gives an intimate and captivating insight into a society that is torn apart by a nationalist-militaristic cult. It's a story of inconvenient truths, empowerment and about the failure of American democracy. My only hope is that some day enogh reasonable people will come together and see whistle blowers like Chelsea as an opportunity to check how you as a country live up to your own proclaimed values and how you can improve.

Thank you for standing up for truth and justice.