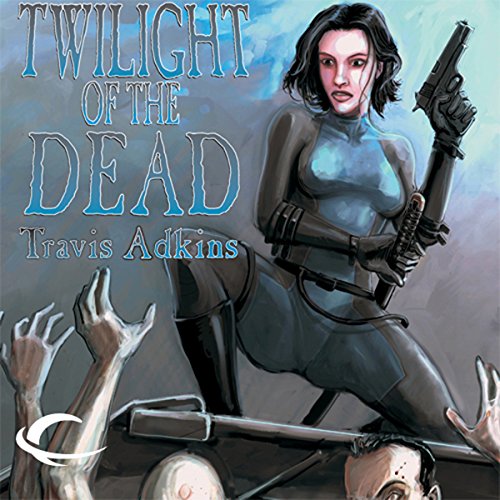 Twilight of the Dead

Courtney Colvin was nearing the end of her teenage years when the undead apocalypse began. She survived, forsaking her youth and innocence, and five years later she continues to exist--albeit lonely--in the fortified town of Eastpointe. Nightmares and the unwelcome advances of Leon Wolfe are the worst things she's dealing with now in her otherwise mundane life. But when a newcomer arrives in town and claims to know the location of the antidote to the zombie plague, it sends Eastpointe into an uproar. To retrieve this cure, she and a group of other survivors must venture outside the relative safety of the compound's walls and into a world ruled and dominated by the flesh-eating undead.

Twilight of the Dead puts a new spin on the zombie genre, yet remains true to the classic rules that have already been set forth. A sure-fire reading pleasure for anyone who loves character-driven horror.

Aside from the narrators having great voices, the story is fast moving and imaginative. I think this is the frst time I actually spoke out loud to the characters in the book about what was going on. Read this book! I hope more of these are written by him, I'm a follower.

Good book; although more of a young adult romance novel than a Zombie book. not for the hard core zombie lover.

Love the story - very cool and what a crazy turn it has :) It has the blood, gore and real zombie action in it - some is kinda a little feely.... but all in all a great read :) or listen

i've been on a zombie kick lately and have been listening to a bunch of different authors and stories. this is the first i've listened to from a girl's perspective-courtney a 17 year old girl at the time of the outbreak. the story revolves around a 5 year time period in her life. the story mostly focuses on the time 5 years after the outbreak with flashbacks to the beginning and intervening years. most of the story focuses on how people interact with each other. most of the characters are hollow, but many of the characters in the zombie novels i've read are hollow. however, i did want to know what happens to certain characters. i guess i'd have to buy the sequel to see.

i'm in my 30's, and i've read a few so-called "ya" books, e.g. hunger games, divergent. this is the first ya zombie book i've ever listened to. i can get into and enjoy a ya book every once in a while so i don't mind ya-themed books so the ya nature didn't throw me. it was different, and i like different, especially since a lot of the zombie books i've read lately have been male dominated. so, i didn't mind the ya aspect. i can say i enjoyed the novel until the end. spoiler alert. the ending seemed rushed to me. from escaping to catching up with the bad guy was way too easy and unbelievable. i was into it until then. plus, i thought the zombies with armor and weapons at the end was stupid.

overall, the book was ok. i like my zombie novels with more action and with a sense of dread. both were missing for me. Will I buy the sequel? Yes. So you can draw a conclusion from that. Well maybe…because right now, there’s really nothing better at the theaters or on the boob tube.

Was this book written by an eight year old? I really gave the author a fair chance, however; five chapters later the book drove insane, it seemed the story was written by a first grader. TERRIBLE, don't waste your money.

It didn't really go anywhere. I wanted to like the characters and I did for a split second here and there but it felt like it started to be good and then changed direction.

Written by someone who loathes the military.

Would you try another book from Travis Adkins and/or the narrators?

Book was bad, narrations was good.

What could Travis Adkins have done to make this a more enjoyable book for you?

Leave his personal views out of his story line.

Nothing, but it was good narration.

Frustration, the author has a complete and total lack of understanding for, and knowledge of, the military.

If you have any respect or appreciation for the Military, remove this book from your list. The author has an obvious low regard for our military and used this story to highlight it. The heroine’s father refers to the National Guard and Army Soldiers as kids too dumb to get scholarships into college and not competent enough to get real jobs (he himself is government employ… go figure). Also noting that because their officers are promoted from within, they are no better (You get the feeling that he thinks the Officer Corps should be drawn from college professors.) This would be fine if this was just a characters point of view, but then the author carries it out by having the soldiers go up and down the streets “just shooting off their weapons”, talking about how their uniforms are good for picking up girls, and of course beating up the elderly. Eventually the military kills a variety of their commanders then forces all the women and children to leave town with them, though they aren’t going anywhere, they just think they are safer if they keep moving. Everyone in the heroine’s vehicle is downbeat accept for her two lesbian neighbors who are very positive.

During the moved they are attacked and the military is not smart enough to kill the zombies with head shots, so of course they get over run. The heroine is saved by a military member because she is attractive, the author again noting that the soldier saved her and abandoned his brother in arms who was next to her on one side, and an uninjured overweight girl on the other side.

Then they wind up in a military compound where after only a few weeks it’s evident that all the military members want to rape the few girls there for providing protection.

All of the sudden a “Black Beret” is dropped into the mix in military fashion by a Chinook helicopter. He says the Black Berets are civilians and have no rank (can we say Comrade) and goes on to offer all the people (military included) cool Black Beret uniforms and swords if they pass his training. Then the military shows complete disbelief and disregard for the use of a sword in killing the zombies and one of the Captains comments on the Black Beret, highlighting the Black part since the gentlemen is black.

You get the distinct feeling that the author believes that our military is filled with uneducated, back water, white supremacist without a shred of common sense of discipline. I can only come to the conclusion that common sense must be rare among the authors contemporizes, so he feels it must be that way throughout society as well.

After an hour and a half into the audio reading of this book, I could take no more and turned it off. If you know anything about the military, just skip this book for the frustration it will cause you.

Think Twice Before You Buy This

This book should be re-classified under young adult romance.

I was expecting action and instead I got the story of a young woman coming of age…that happens to be set in a zombie apocalypse. The writing was predictable and there were several times that I pushed stop and had to walk away.

The narration was flat and at times it seemed like they were reading the book for the first time.

Would you ever listen to anything by Travis Adkins again?

What character would you cut from Twilight of the Dead?

THIS BOOK IS SO BAD ON SO MANY LEVELS

I CAN'T BELIEVE I PAID MONEY FOR THIS CRAP......THIS THING WAS A TOTAL RIP-OFF. I ENDURED ABOUT AN HOUR OF IT AND TOOK IT OFF MY IPOD........... CAN'T BELIEVE THE SAME GUY WROTE AFTER TWILIGHT, WITCH WAS A PRITTY FAIR ZOMBIE STORY...