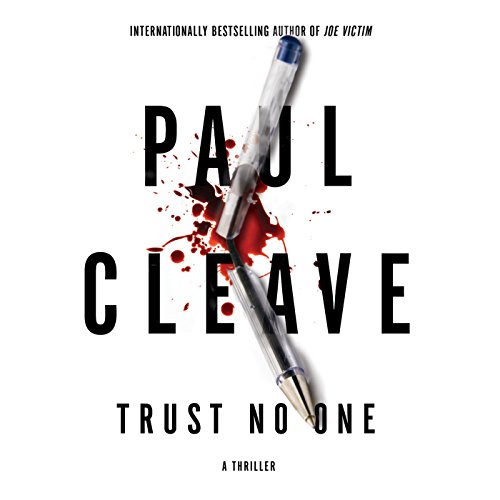 Jerry Grey is known to most of the world by his crime-writing pseudonym, Henry Cutter - a name that has been keeping readers at the edges of their seats for more than a decade. Recently diagnosed with early onset Alzheimer's at the age of 49, Jerry's crime-writing days are coming to an end. His 12 books tell stories of brutal murders committed by bad men, of a world out of balance, of victims finding the darkest forms of justice. As his dementia begins to break down the wall between his life and the lives of the characters he has created, Jerry confesses his worst secret: The stories are real. He knows this because he committed the crimes. Those close to him, including the nurses at the care home where he now lives, insist that it is all in his head, that his memory is being toyed with and manipulated by his unfortunate disease. But if that were true, then why are so many bad things happening? Why are people dying?

"On almost every page, this outstanding psychological thriller forces the reader to reconsider what is real.” ( Publishers Weekly)
“A vivid, jangled exploration of mental illness, dark imagination, and the nowhere territory in between.” ( Kirkus Reviews)
“This powerhouse novel plays with the subtexts at the core of the mystery genre.” ( Booklist)

Read the reviews, heard great things, but kept waiting for the suspenseful part that never seemed to come.

Can't believe I wasted so much time on this book.

One of the worst I've been unlucky enough to purchase. I finished it strictly out of principal. Not worth the money or time.

captivated me from the beginning

this was truly a page turner great performer and was never boring. great read and would definitely recommend

I really enjoyed this book but, to me, it became predictable about 3/4 of the way through. When the light bulb went on, it was almost like I was waiting and waiting for the book to reveal what I already suspected....and it did. The journal reading got a bit tiresome to me....I wanted to fast forward through a lot of it, but didn't because I didn't want to miss any good details. And it was def necessary to understand the book. The narrator did a great job playing each character and made the main character come to life with a great understanding of what he was going through with the disease. I will say that the ending wasn't what I expected, but I wont say more as I dont want to give anything away.

There were multiple times that I had no idea where this was going to go and the ending is one I don’t want to spoil but that was a great way to wrap up the story. The performance was excellent and the tension was palpable. Listening to this book made a 13 hour car ride meltaway.

I absolutely loved this phenomenal first-person narrative. Paul Cleave is a genius and Paul Ansdell is the perfect narrator for this intriguing work.

Paul Cleave takes you into a demented mind. The sadness of dementia yet the captivating of a crime novel is an intriguing combination. It left me understanding “Captain A” much more than I could have ever expected. I’m looking forward to reading more of his work.

great story, with a good narrative. but the ending was a little disappointing!

Long and drawn out

The funny parts are brilliant but they are spread thin throughout a very slow moving repetitive plot. The middle picks up but loses it in the end. The reader worked well with the text but it's not a book I would recommend to others.

I found it very entertaining. engaging wi ty H a developing plot. certainly as the story develops it clear he should not be trusting of all.