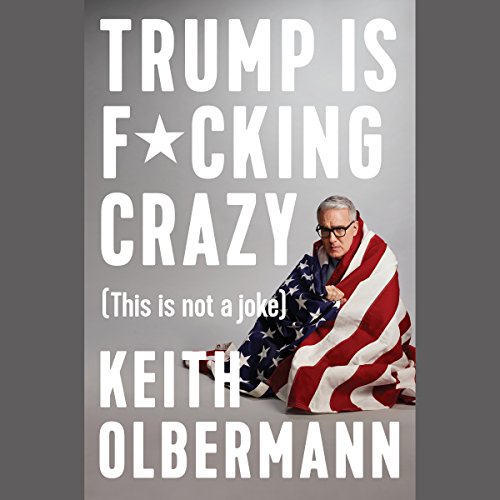 Since Donald Trump's presidential nomination, Keith Olbermann has emerged as one of the web's most popular anti-Trump screedists - each installment of his GQ web series The Resistance receives nearly four million views, and his fiercely progressive monologues have garnered a new generation of fans and followers. In Trump Is F*cking Crazy, Olbermann takes our commander in chief and his politics apart with journalistic acuity and his classic in-your-face humor. With more than 50 individual essays adapted from his GQ commentaries, including new up-to-the-minute material, Trump Is F*cking Crazy is an essential listen for concerned citizens who - like Olbermann - refuse to normalize or accept our new political reality.

Wherein KO Proceeds To Talk My Ear Off About Trump

I get it! I like Keith Olbermann. I don't like Donald Trump. I thought this collection of diatribes might be a fun wallow. Unfortunately, after a couple of hours of hyperbolic invective, I felt myself on my way to being bludgeoned to death - to the extent that I worried I might not be able to survive 16 hours of it.

For what it's worth, I agree with everything Olbermann has to say - but he goes about saying it much too frantically and for way, way, way too long.

Spotlight of a fool, wiitty, timely and unabashed

Unfortunately Fans of Keith Olbermann will find nothing new here as most of the book is directly lifted from excerpts of his Videos for GQ, with sprinkled in extra commentary for good measure,

But it still remains A first rate documentation and Timeline of a very unexpected turn of events in United States History. When we elected a Moron to be President and the most Powerful man in the world,

The author Narrated the book himself and did a wonderful job, and behind these words is one of the most passionate Commentators of our time. Never afraid to speak up & speak out while others fear to speak,

Olbermann was one of the first in media to express his thoughts about the fitness of the Presidential Candidate in question during his GQ series The Closer. After the election he & his staff made the decision to continue on under the name The Resistance.

Where he details the Run up to and the immediate aftermath of the 2016 General Election in which Hillary Clinton lost to Donald Trump and the craziness that has ensued,

With Well researched commentaries that give voice to a large segment of the US population.
(His GQ web series has received over
300 million views.)

Read th we Title and Think

Oberman's language in this book is beyond the gutter. I spent 4 years in the navy and heard less foul language any time than I heard in this book. I understand some language and I expected some based on the title alone but this was over the top and took away from the points he was trying to make. I never understood what he was trying to accomplish. I heard someone say that foul language is a sign of a lack of intelligence because the intelligent person has a large enough vocabulary to communicate their point without foul language. Since I know Oberman to be intelligent and capable of doing a 1 hour show with no foul language I dont understand the need or point. Would not the title "Trump is Crazy" carry the same point as "Trump is F*cking Crazy?" It is crude language for the sake of being crude. While I dont believe Oberman lacks intelligence, perhaps he is just crude.

The Most Important Voice Of The Resistance

The most eloquent, gritty, and to the point catalogue of Donald John Trump's abominations.
Mr. Olbermann's scathing rebuke of the POTUS will emerge as essential reading for generations to come, assuming that there will actually be generations to come.

Emotional, sardonic, infuriating, and frightening, Trump Is F*cking Crazy is not just Big Brother's 16 Hours Hate. It's a reminder that America's constitution and soul are on life-support.

Ignore the fact that Mr. Olbermann is a master orator. He dares to tread that water that nearly no one in mainstream media have the courage to swim. While CNN's Don Lemmon was saying that we should give Trump a chance, Keith, recognized that POTUS lost that benefit of the doubt during his pogrom-like campaign. While CNN's Van Jones was saying 'tonight he became our President', Mr. Olbermann was illustrating the threat that Trump's agenda, mental health, and his assemblage of corrupt fascists poses to this country as well as the rest of the world.

The only thing that the book will leave the listener or reader wondering about is whether or not Mr. Olbermann will be able to write a second volume entitled 'Trump WAS F*cking Crazy&amp;amp;quot;. Let us hope that this incredible first volume isn't just a sad epitaph.

as much as I dislike the president I still can't stand finish listening to this. book. I'm only on the second chapter and he keeps repeating the same story over and over. Olberman screams as he's reading. I'm returning this

Olberman is like watching a hidden camera exposing a break in. The events of the last 2 years reveal that Donald Trump's presidency is a dangerous fraud. The theft of the presidency was made possible because this demented vindictive simpleton co operated with the enemy . In the real world he would not be allowed to continue as a school bus driver .The conclusion is obvious. #ImpeachTumpNow

Often annoyed by narrator’s constant shouting.The same story could have been told without the blasting voice, otherwise good timeline of events.

I loved it! Especially, that it was narrated by the author. I highly recommend this.

A time capsule from Hell

Keith Olbermann would probably quite candidly admit that he is given to hyperbole and bouts of hysteria, especially when it comes to the topic of our 45th president. That said, this collection of transcriptions of Mr. Olbermann's video commentaries for GQ following the latter days of Trump's campaign and the first 7 months of his presidency are invaluable. This past year has been an unending tide of outrages and tragedies, and they pile on top of one another so quickly that you find yourself forgetting what happened just two months ago. Even now, as our nation is still reeling from the Las Vegas shooting, the events of Charlottesville seem like ancient history. IT WAS TWO MONTHS AGO!
This collection details the offences of President Donald John Trump as they happened, and it is by no means comprehensive. It is simply not possible for one man to keep track of everything that President Trump has said or done in the last year. Regardless, this is a good place to start. I recommend buying a copy for every single Trump supporter on your Christmas list. Then I recommend sitting on them and forcing them to listen to it.

This book will in the foreseeable future be required post graduate level political science reading. What a fantastic snapshot of the unprecedented political circumstances we find ourselves in right now. It will hopefully go down in history as part of the story of Trump's long overdue impeachment.