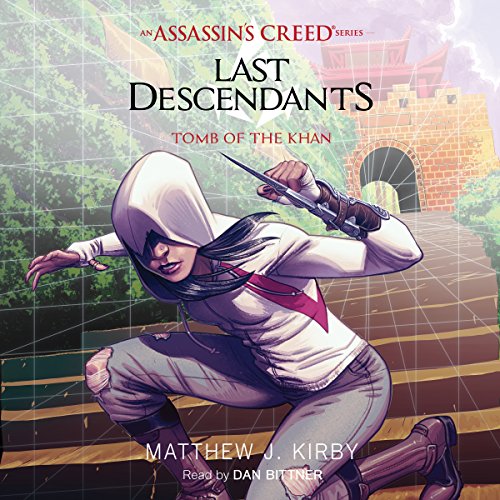 Tomb of the Khan

In Last Descendants, Owen and a group of other teens located the first piece of an ancient and powerful relic long considered a legend - the Trident of Eden. This piece was sought by the Brotherhood of Assassins and the Templar Order, but before either organization could take the piece, it was stolen by an unknown third party. The tenuous relationship between Owen and the teens fractured, with some taking sides with the Templars and others with the Assassins.

Book two picks up weeks after the events of book one. There are still two pieces of the Trident of Eden to find, and both groups are determined to not repeat their mistakes. The next piece is said to have been buried with Mongol warlord Genghis Khan, whose tomb has never been found. Now the teens on either side of the conflict will have to go deep into simulations in war-torn Mongolian China in a race against time to discover the next piece and ensure their safety before the others.

I am loving the series!

this series is a fantastic addition to the assassin's Creed universe! I feel immersed and engaged in the story and feel like I cannot put it down.

What a good story

Kept me on the edge of my seat the whole time what a lovely ride. And made you feel some type of way about the characters as they grow into them selves

loved this series. Matthew does a great job keeping with the integrity of the assassin's Creed world. This is an excellent listen for young adult readers and adults alike. The voice acting is great as well. kept me listening to the end.

Love how the narrator used many accents and voices to depict the characters!
Story was very much in depth and involved a lot of twist and turns.
All the elements of the game were present, screenplay very much like the action movie. The chapters overlay upon each other and climax brilliantly!
Well told story!

I have read the paperbacks of this story arc.
It is Interesting that these 6 kids have a connection over the centuries. Check this out when you have a chance.

The story is okay but a bit if a struggle to finish.
This series would make great films for kids though.

Better than the first book

Just as inviting story as the first book, if not better. I was not expecting that at all

excellent book and the narrator done good to keep the story interesting and entertaining recommending to friends!

These two stories I quite monotonous there's so much back and forth that it's hard to follow without falling asleep . you never know what twist is going to leave a different path and seeing how they all culminate becomes tiresome .

I absolutely love this series!

great from start to finish, it's left me wanting to read the next installment. although, I can't find anything about Sean that I can relate with. maybe he'll wisen up in the next one.