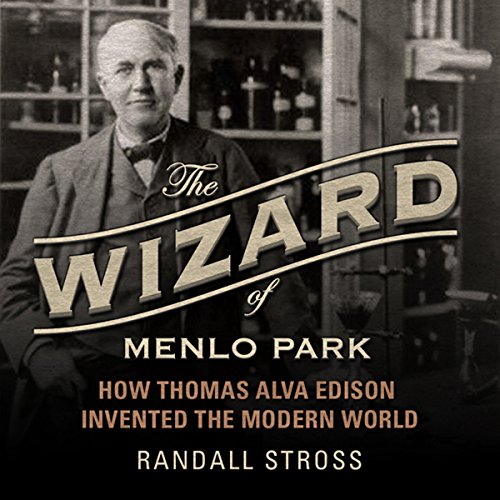 At the height of his fame, Thomas Alva Edison was hailed as “the Napoleon of invention” and blazed in the public imagination as a virtual demigod. Newspapers proclaimed his genius in glowing personal profiles and quipped that “the doctor has been called” because the great man “has not invented anything since breakfast.”

Starting with the first public demonstrations of the phonograph in 1878 and extending through the development of incandescent light, power generation and a distribution system to sustain it, and the first motion picture cameras - all achievements more astonishing in their time than we can easily grasp today - Edison's name became emblematic of all the wonder and promise of the emerging age of technological marvels.

But as Randall Stross makes clear in this critical biography of the man who is arguably the most globally famous of all Americans, Thomas Edison's greatest invention may have been his own celebrity. Edison was certainly a technical genius, but Stross excavates the man from layers of myth-making and separates his true achievements from his almost equally colossal failures. How much credit should Edison receive for the various inventions that have popularly been attributed to him - and how many of them resulted from both the inspiration and the perspiration of his rivals and even his own assistants? How much of Edison's technical skill helped him overcome a lack of business acumen and feel for consumers' wants and needs?

This bold reassessment of Edison's life and career answers these and many other important questions while telling the story of how he came upon his most famous inventions as a young man and spent the remainder of his long life trying to conjure similar success. We also meet his partners and competitors, presidents and entertainers, his close friend Henry Ford, the wives who competed with his work for his attention, and the children who tried to thrive in his shadow - all providing a fuller view of Edison's life and times than has ever been offered before. The Wizard of Menlo Park reveals not only how Edison worked, but how he managed his own fame, becoming the first great celebrity of the modern age.

"As he demonstrated in his earlier examinations of the creative lives of Steve Jobs and Bill Gates, organizational historian Randy Stross once again reveals a keen eye for the hidden details and forgotten nuances in the lives of great men. His recreation of the life and achievements of Thomas Edison will become the standard reference to which all historians will turn for years to come. And yet the book is written with an eye for detail and a flair for observation that reads more like a great mystery novel than your standard biography. A must read!" (Roderick Kramer, William R. Kimball Professor of Organizational Behavior, Stanford Business School, Stanford University)

It has been many years since I have read about Thomas Alva Edison. When in elementary and high school I read all I could find about Thomas A. Edison, but in University I discovered Nicola Tesla and since then I read about Tesla. It was nice to revisit Edison.

I found this to be an entertaining biography. Stross approached this biography a bit differently than other biographers. Instead of writing about his technical career Stross presents him as a self-promoting celebrity who knows how to control the power of media. Stross did a brief review of Edison’s inventions but mostly he concentrated on the business aspect of Edison and his inventions. Edison was one of the first to use “branding.” It is commonly used today by celebrities.

The book is well written and researched. Edison’s inventions created our modern world. Stross did not cover much of this but covered his marketing skills. I do not think Stross was being negative about Edison and his inventions but was trying to reveal another aspect of the man. This should not be the first biography of Edison one should read; but if the reader is well versed about Edison this book will provide another aspect of the man.

Grover Gardner does an excellent job narrating the book. Gardner is an actor, voiceover artist and an award winning audiobook narrator. In fact, Gardner was chosen by Audiofile as a “golden Voice” narrator.

Learn about Edison, not a full biography

The book will teach you about Edison's accomplishments. The book also does a good job of demystifying Edison and sharing some of his setbacks and unfulfilled promises.

The overall impression from the book was disjointed. It tells a story of Thomas eddision, but I really feel like it didn't touch on some very well known points of his life and it was not clear alot of the time how he got to where he got. Overall a good listen but not what I had expected

Enlightening, but not compelling

My knowledge of Edison was basic and based largely on folk lore. Reading this book taught me more about Edison--celebrity was important to him, did he really invent things or just take credit for them, he expected more of others than he gave himself, he had a profound hearing loss and he went camping with Ford & Firestone. Those are my lasting impressions.

I am glad I read (listened) to the book and learned more about Edison, but I do feel my bubble was burst as this great inventor and American hero became a self-centered, aloof man. I guess reality had to set in at some point.

The book, in general, was well written, although at times it seemed to drag on and failed to be compelling.

But the subtitle is misleading. I didn't really get a sense of "how TE invented the modern world". How his greatest inventions isn't covered in much depth. It does present a overall picture of the man, warts and all that was very interesting.

Would you consider the audio edition of The Wizard of Menlo Park: How Thomas Alva Edison Invented the Modern World to be better than the print version?

I haven't read the print version

this book was a bit overlong and had too many details that didnt help tell the story in some places.

After listening to this book I will be a permanent fan of Grover Gardner. He's not particularly varied in his voice performance but he's very comforting and easy to listen to.

"We've invented a movie, about a book that was invented to tell the story of an inventor who didn't really invent much!!"

If you are interested in the modern "cyber" industrial revolution or have an interest in the true story about the men at the center of the creation of modern electric light then you should read this book.
I have been a fan of a number of the historically based fictional accounts of Edison, Westinghouse, and Tesla. However, "The Wizard of Menlo Park" separates fact from fiction and the true story does not disappoint. It is a tail of corporate intrigue and the battle of ego displayed by the titans of an industry in the late 19th and early 20th century that, at the time, represented a cutting edge technology similar to what is going on today.
My only slight disappointment is that the reader's tone does not reflect the exciting nature of the subject matter.

a good insight about the true career of this inven

it is interesting to see how this inventor truly went through life. very well read.

Enlightening look at the man so highly regarded

Excellent narration with a slight feel of an antique voice. I enjoyed the story though I find myself frustrated for what I thought I knew of Edison.

The narrator's performance was passable, but personally, I didn't care for his voice.

The story wasn't what I expected. However, it all depends on whether you are interested in a personal biography of Edison, his family, etc… or whether you are looking for a fact sheet of all of his failed & his successful inventions.

This story tended towards an impersonal fact sheet of Edison's inventions, and was extremely boring and slow moving throughout the majority of the book. It failed to bring any sense of personal concern or connection with the main character.