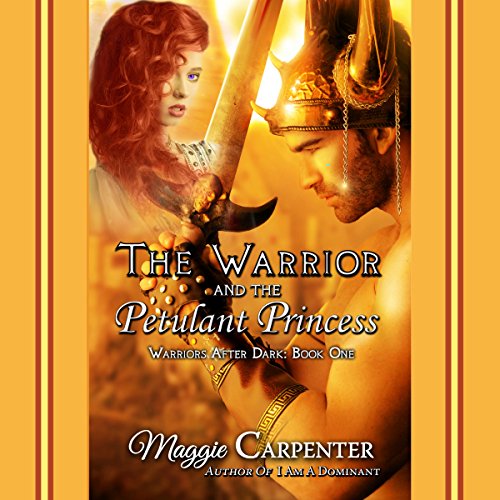 The Warrior and The Petulant Princess

Princess Lizbett of Verdana is a beautiful, violet-eyed, strong-willed young woman. She'd once been crazy about a mysterious stable boy named Larian, His hair fell in long shimmering ringlets, and his clear aqua eyes would set her pulse racing. When he left, she was utterly heartbroken.

Can the wisdom of his years, and his unique training, help him control a stubborn, spoiled Princess? When Larian tries to foil an evil plot, will Lizbett's foolish ways place them in danger?

Leave behind the mundane. Venture into Verdana. Watch a masterful warrior tame a petulant Princess, while saving a King and his Kingdom. Embark on an adventure today.

excellent story, captivating, held my interest. spanking scenes could have been more descriptive. but in the end couldn't put the book down.

Not much plot, poor narration

I am not sure why I continued to listen to this. Some parts of the story are interesting, but there’s not much to it. Basically, there is a spoiled princess who is rude, had a crush on a guy from her youth, and when he comes back they get together and he “tames” her via emotional, physical, and sexual dominance. Which she seems to like. It had a lot of descriptive , “hot“ scenes, but the narration was very poor. Like your English uncle, Bob, was reading a bedtime story to you, with adult themes. Kind of creepy. And if you actually want story or plotline, this probably isn’t the book for you. Romance novels with steamy scenes are fine, but that is about all this book had, although I wouldn’t call it erotica. There was a storyline between those scenes, it was just very simple and boring. Maybe it will be your thing, it certainly was not mine. If I had not been driving on long trip and not wanting to mess with finding another book, I would’ve stopped it in chapter one.

sometimes a firm hand is needed

this story is about someone who is accustomed to getting her way and isn't shy about making it happen. someone comes along and uses the right methods to obtain her compliance. I enjoyed the story and the narration was spectacular.

Entering but not for everyone

The plot was rather entertaining, but the main characters were annoying when interacting with each other. The premise that a woman needs to be punished to be at peace and to know her place is insulting. I didn’t know if I should just close the book and move on, or plain laugh because of the ridiculous assumptions and behavior. The princess is annoying and childish but spanking and other such tactics do not a wise and mature person make. Anyway, the plot against kingdoms, escape and strategy kept me going.

Another example of a good book destroyed by the wrong narrator. There are books by Maggie Carpenter that are probably really good but the choice of bad narrators prevent me from buying them. Having a British male narrator reading a book like this is ludicrous and sad. It could have been a dynamite read, but NO. The story itself is fantastic, sweet, lovely, HOT and enthralling. The author did her job brilliantly including mystery/intrigue along with romance that includes the D/s thrills but whomever chose the narrator really destroyed what could have been a superb experience.

This one was a struggle to finish. In the beginning they said she was stubborn and smart when really she seemed like a 2 year old through the whole book. She was a complete twit for one that is going to be a queen. He was pompous and abusive and seemed to have a complex that if he wasn't satisfied then he turned to physical retribution. I will not continue with this series and am surprised that I made it through this book in the first place.

Hot and delicious story with an awesome narrator!!

As to the narrator: What can I say? It was narrated by Rob Groves, and he’s fabulous, his voices and emotions make listening to him a real treat. What I find most memorable about this audible version of The Warrior and the Petulant Princess is how phenomenally the narrator brings out Lizbett’s personality. She is an awesome character and is extremely entertaining. I found myself laughing out loud, when I was not blushing, this book is hot and delicious.