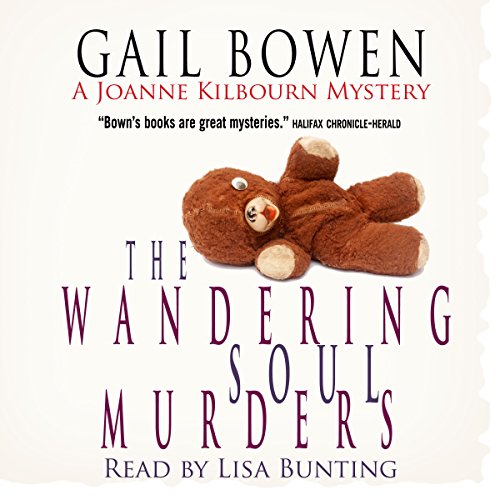 Murder is the last thing on Joanne Kilbourn's mind on a perfect morning in May. Then the phone rings, and she learns that her daughter Mieka has found the corpse of a young woman in an alley near her store. So begins Joanne's chilling collision with evil in Gail Bowen's riveting third mystery, The Wandering Soul Murders.

Joanne is stunned and saddened by the news that the dead woman, at 17, was already a veteran of the streets. When, just 24 hours later, her son's girlfriend is found dead, drowned in a lake in Saskatchewan's Qu'Appelle Valley, Joanne's sunny world is shattered. Her excitement about Mieka's upcoming marriage, her involvement in the biography she is writing, even her pleasure at her return to Regina all fade as she finds herself drawn into a twilight world where money can buy anything and there are always people willing to pay.

Not my favourite entry but a great series

This was not my favourite entry in the series so far (mainly because I do not care for the subject matter -- too sensationalist for my taste, and "done" too often, although that might not have been the case in the early 1990s when the book was written).

At any rate, I'm mainly writing to point out that Audible also has the next entry in the series (A Colder Kind of Death) but it's not listed in the series overview for some reason. Just search for the title or the author's name instead.

I do hope that Post Hypnotic Press and Audible will continue to release the next books in the series since I have grown rather fond of the recurring characters, and Lisa Bunting does a great job as narrator.