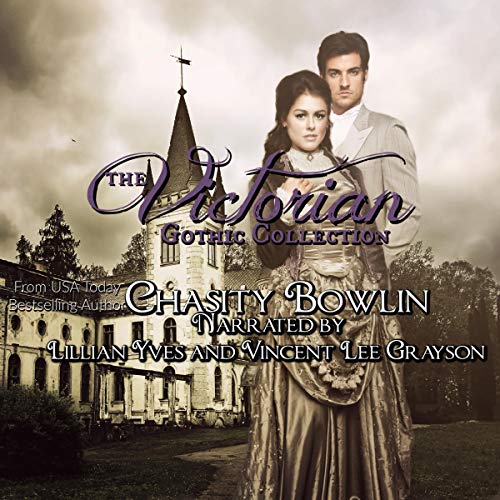 The first three books of the best-selling Victorian Gothic Collection in one volume!

After losing her father and nearly losing her life when their ship sank off the coast of Cornwall, Adelaide Hampton Parke is faced with a terrible dilemma. Her stepmother has demanded that they immediately set sail for New York, but the very idea of stepping foot on board another ship and facing the uncertainty of a transatlantic crossing leaves her paralyzed with fear. Not to mention that her relationship with her stepmother is contentious at best, and she's been given only six months to return to New York and find herself a husband or be put out of the family's Park Avenue home to make her own way in the world.

Salvation comes, unexpectedly, in the form of a telegram from Eldren Llewellyn, a Welsh lord and the sole owner of a mining empire. He'd partnered with her father in multiple business ventures, and upon the man's death, proposed to Adelaide in order to spare her the ordeal of returning home in her stepmother's less-than-tender care. But as she travels to his remote estate in Snowdonia, Adelaide comes to realize that his ancestral home, Cysgod Lys, literally the Shadow Hall, is filled with secrets and dark things she cannot name. Fear is her constant companion and she begins to wonder if her new husband is her savior...or her doom.

Newly married, Adelaide Llewellyn is struggling to find her place in her distant husband's life and in his ancestral home of Cysgod Lys. Surrounded by bitter enemies, lies, and the dark secrets that have haunted his family for generations, there is much to be feared. But the danger she faces is as much from the living as the dead.

There are dark and unnatural things lurking within the walls of Cysgod Lys and on the moor that flanks it. They've made their presence and their power known to her. But Adelaide will not be ruled by fear, and she will not simply give in to it. She means to fight for her home and for her husband, no matter what may come.

The plots, schemes, and machinations at Cysgod Lys, from both mortal and immortal sources, are coming to a head. But as the ancient evil maneuvers to fully become a part of the living world and Frances struggles to extricate herself from a situation of her own making, Eldren and Adelaide, with the help of Lord Mortimer and Madame Leola, are hatching schemes of their own. Buoyed by new confidence in her previously latent abilities, Adelaide has a plan that may finally offer them peace, freedom, and a chance for true happiness together.

Fighting something that has no true form, something that can take the shape of anything and anyone, something that potentially sees and knows everything, is next to impossible. The closer they get to the final battle, the higher the stakes become. But Adelaide is determined because she isn’t just fighting to win...she’s fighting for love.

My wife and I listened while traveling to a much needed getaway . We got to our destination and usually we stop listening to a story after a long drive, until we begin our return trip. Not this one. We had to keep listening. Our view from the nearly empty resort overlooked a foggy forest which enhanced this lovely paranormal story for us. The story of a young American woman travelling abroad in Victorian times to find hatred, horror, and love, was beautiful and done in a wonderful duet narration. I'm not always a fan of special effects in audiobooks, but there was just enough, not over done, and done very well.
I highly recommend listening to this collection, even if your not overlooking a spooky forest.

I wish they would do more narrations like this series. it truly was refreshing.

FINALLY! Dual narrators that have a conversation with each other as intended versus handing off chapters off to one another. It was so nice to hear the variety of voices for the female and male characters throughout the book. The sound effects were also so very effective in conveying the supernatural happenings appropriate to each situation and character. This is how I would love to see the audiobook community grow.

What a sweet surprise!

I loved every minute of this book. It was scary, and romantic at the same time. Don't pass this on up.

it was difficult to put this book down. I listened to it every waking moment that I had a chance and into the night when my body should have been asleep. enjoy.

Oh such a good listen!

So I got this collection strictly on who narrated it, this is not my usual book. I’m so happy I did though it’s a great collection and now I need more! I want to know what happens to the family. Love the story line, love the twist it gave. The narration they did amazing as usual I feel like they have it so much detail and love!

I should have returned this book

this book, to start; the story in itself, I feel was strong, exciting and really good. I would edit a few things out, because it was just weird, how it was like saying the same thing twice, but sounding like it was all the main, girl characters idea. SEX, oh my gawd, if you like several graphic sex acts in every other chapter, this is your smut, I mean, book. I however, do NOT. if you have a life and don't need to live through others' sexual encounters, this is not your book. The reader...I don't know if she is new to this, but it is definitely, NOT her forté,. it was torture, to get through all three books. both narrators, actually. inflections we're all WRONG and accents, deplorable. Like I said, good story, just needs help. and it ended, just, ended. to easily, I think, I was waiting for the final fight, after all that had gone on.

A Great Gothic Series with Romance

Great narration and each book in the series has a suitably gothic vibe. I also liked both Adelaide and Eldren as characters, seeing them changing after they met and working together as a team to fight back against the evil in their home. These 3 books should all be read together as they each pick up shortly after the other ends so getting the collection rather than 1 at a time is highly recommended.

Gothic Romance With a Paranormal Spin!

Chasity Bowlin pens a fabulous collection in this one! Beautifully and convincingly narrated, The Victorian Gothic Collection Boxed Set 1-3 gave me chills, joy, a warm feeling, and held my interest through every hour! The characters are wonderful! All deep and fully developed, some good, some positively evil, some living, some not so much. I particularly loved how Adelaide and Eldren’s relationship grew naturally and organically deeper over time without being hurried or rushed, and I enjoyed how the relationship between Lord Mortimer and Madame Leola developed. I felt bad for Eldren’s brother Warren, but by the end, all I could see was the possibility of a future story for him down the line, hint hint. If I have made you curious about these wonderful characters, and this delicious story, good! Grab this fantastic collection, relax and treat yourself to fifteen plus hours of glorious listening pleasure! This one is a keeper!

I loved these audiobooks from the first to the last page! I didn't want it to end, a gothic treasure ! I couldn't stop listening...the storyline was strong & the characters enticing. it draws you in. I highly recommend this audiobook/book. lastly I must say I enjoyed the narrators; excellent job!