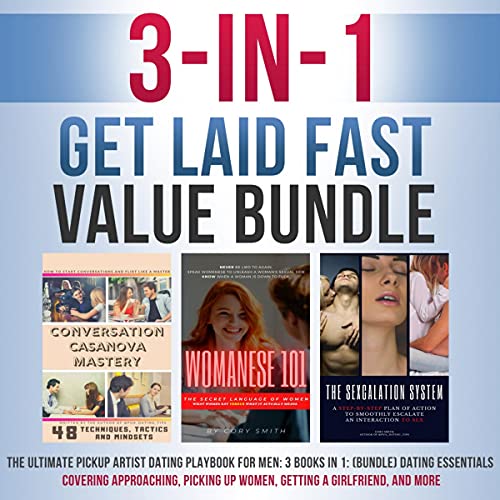 The Ultimate Pickup Artist Dating Playbook for Men: 3 Books in 1

You see her every once in a while, and you want to turn things sexual,

You want to f--k her hard and f--k her fast, yet when she's with you, you do nothing because you don't know how to make moves on her.

Your lack of knowledge on how to escalate the interaction towards sex paralyzes you from taking action. As a result of lack of action, you end up stuck in the friend-zone. You just f--ked yourself by not knowing how to fu--k her.

As a man, it's your responsibility to smoothly lead a woman into a sexual state of mind, physically aroused, and bang the s--t out of her.

Here is the truth: Even if a woman really likes you, she will usually avoid making blatant sexual moves on a man (initially), because society will judge her for being sexually aggressive and label her as a stigmatized "s--t". So she's waiting on you to make the moves on her because she knows that a high status alpha male goes after what he wants in life and takes it.

After a decade of experience in the field and thousands of approaches, I've boiled down what I have learned into a step-by-step game-plan with specific examples of leading a woman through a dating process that ends in mutual sexual ecstasy. This audiobook bundle will show you how to get laid the smart and fast way.

By implementing the techniques in this audiobook, you'll have a woman stop showing you their innocent prudish side, start showing your her secret wild, sexual side, and turn her into a f--k-buddy.

This book is something else...

I love Dat. this book good bro. I read it and go ya ya ya

This is a great inspirational audiobook

This book it's one of the examples most of the dating coaches out there are using.
I went through a lot of dating materials and a lot of coaches out there yours is done knowledges they got from this book and they reword it and make it their own advice.

This audio recording is a great supplement to the book, as I would recommend listing it several times and revisiting chapters as one needs it.

PRO'S: Narrator sounds a lot like Liquid Snake from Metal Gear Solid 1. It's like receiving game from a video villain. The information is a pretty good refresher, even for someone like myself that has studied game. I did manage to learn a couple of new things, even with my massive mind of information. I definitely recommend for veterans and beginners.

CON'S: The background sexually aroused voice when hearing "Sex" is funny at times, but can also get annoying, even somewhat distracting, if you can look passed the over down voice effect, it's definitely good listen and deal 3-1.

Must read for men, great book. Narrator seemed annoying at first, but stick with it. Ends up being funny as hell. Author is spot on 100%.

This book is complete trash with zero actual advice. Booming, thundering "fuck the pussy!" for motivation.. Couldn't make it thru 15 minutes. Complete waste

Anybody and everybody should listen this audible.

This book is one of the better books on personal development for men. This book discusses how to improve one's self with improving relationships with women as a secondary perk.
Amazing Listen.

This book was I opening I learned a lot. This book will be very helpful to improving my life overall. I would recommend this book to anyone looking to improving their life for the better!

It goes beyond dating and shows men a clear path to progression from being just unique to being rare. Issues, regarding, love, intelligence, self-reflection, self-esteem and maturity are stressed to provide a complete guide for improvement before, during and after dating. The authors purpose is to emphasize self improvement.