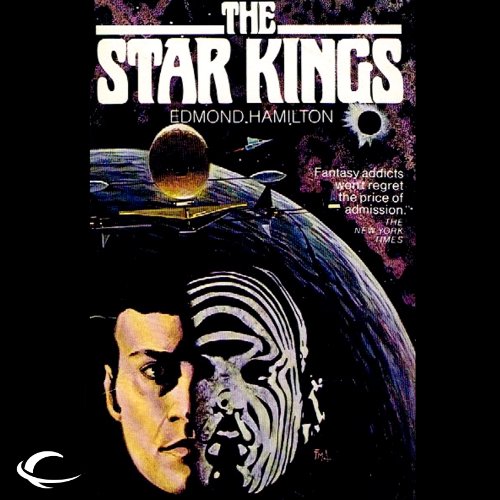 The Star Kings, written by Edmond Hamilton, is an all-time great sci-fi classic. Young, restless, and dissatisfied with his ever monotonous insurance job, John Gordon discovered a way of traveling through time! And when he arrived in the strange world of tomorrow, Gordon found himself in the middle of a titanic interplanetary war - and he was the one man in the universe who held the key to final victory....

His adventures on other planets, his strange love affair with the beautiful Lianna, and his single-handed battle against the invading legions of the “Dark Worlds” all add up to an exciting adventure classic by one of the science fiction genre’s most beloved authors, Edmond Hamilton.

It's old school sci-fi, written long before we knew more about the Universe, our galaxy, and the stars around us. Cool, I can accept that, suspend disbelief enough to enjoy the prose.

But the hero? Wow. I remember reading "Return to the Stars" many, many, many years ago, and thought the story was pretty good. Don't remember details about John Gordon as written then (I'll be rereading or audiobooking it shortly). But in this book? Wow. John Gordon is a dunderhead. He's constantly running around stunned, shocked, stunned, shaken, stunned, confused, stunned, bewildered, stunned, and overwhelmed. And did I mention stunned? After being in the universe for weeks, he just doesn't get a clue. Yeah, he has a great secret to keep (the mind transference with Zarth Arn), but seriously, after a few weeks of being involved and immeshed in the universe at large, he should stop being "stunned... overwhelmed... shocked... shaken... etc". I swear I kept waiting for him to curl up in a ball in a corner somewhere and start drooling. :-( Occasionally he demonstrates some backbone and starts to hold his own, but in the next scene he's...stunned by something. Again. {sigh}

Did Kevin Foley do a good job differentiating all the characters? How?

He did okay. Not super great, but definitely not bad. I've suffered through far, far, far worse.

Do you think The Star Kings needs a follow-up book? Why or why not?

It already has a follow-up book: Return to the Stars.