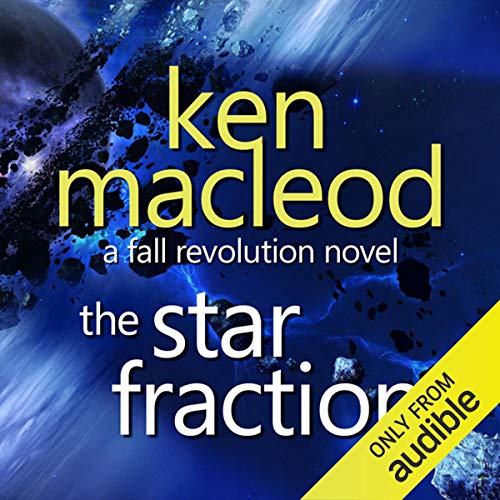 Moh Kohn is a security mercenary, his smart gun and killer reflexes for hire. Janis Taine is a scientist working on memory-enhancing drugs, fleeing the US/UN's technology cops. Jordan Brown is a teenager in the Christian enclave of Beulah City, dealing in theologically-correct software for the world's fundamentalists - and wants out. In a balkanized twenty-first century, where the "peace process" is deadlier than war, the US/UN's spy satellites have everyone in their sights. But the Watchmaker has other plans, and the lives of Moh, Janis, and Jordan are part of the program. A specter is haunting the fight for space and freedom, the specter of the betrayed revolution that happened before. . . .

The reader makes it work

A wild imagining of a future and its political movements, close-up war, adventure, and aware AIs. Full of great throw-away details like the Femininists [sic], with their backpackable hoop skirts. Lots of in-jokes like the men in black.

Not the most tightly plotted (or comprehensible!) book, but the reader makes it worthwhile and memorable.

What did you love best about The Star Fraction?

This story is not formulaic. Ken Macleod has constructed a complex, rich and scary future based on today's technology and our political milieu. With its many characters, numerous political factions and a Balkanized future Britain with numerous small states, it's hard to get a handle on the plot at first. A persevering listener will soon catch on and be taken for a wild ride through the near future. Though the book was written in 1995, the author has uncannily anticipated social networking, computerized market manipulation and blogging. His future world is rich in detail, its denizens not always whom they seem to be and not averse to changing sides when it suits their purpose. Character development is good for a sci fi novel, though the plot moves by mysterious means for the most part and is not generally character-driven.

Moe Cohn (sp? as this is an audiobook), the central character around whom the story revolves. He is a mercenary but in spite of his profession, he has his ideals, intellectual honesty and yes, he makes mistakes, like other human beings.

What does Stephen Crossley bring to the story that you wouldn’t experience if you just read the book?

The reader was excellent, with numerous distinct voices and good acting ability. This almost seemed to be a radio play at times.

The story is complex enough that it's worth considering reading it rather than llistening to it. Given the future noir degradation of Ken Macleod's world, I don't entirely buy the level of technological achievement that it manifests: space stations, space ships and highly sophisticated computer networks seem out of place alongside ruined buildings and groups of people living tribal lives in the wild.

I can't tell you how many time I've read The Star Fraction by Ken MacLeod in my life. I remember buying this as a paperback way back in the early 2000's. It sticks in my mind because it was one of the first, maybe the first, book I'd ever found and chose for myself in a bookshop.

Since then, I've read it countless times. So much so the original book gave up on me years ago and I moved to Kindle, and more recently to the Audible version.

Back when I first read this, many of the political issues and dogma raised in the book washed over me. I understood them as basic concepts but never paid them much thought. As I've come to understand them further, the more I understand and enjoy this book.

Set in a balkanized future where the UK has undergone a civil war and mini-states, some only the size of city blocks, are now the norm. They range wildly from Christian enclaves such as "Beulah City" where your actions and monitored and filtered, to open, freewheeling societies like "Norlonto" an almost utopian freemarket where you can do as you please.

Moh Kohn, the protagonist, leader of the Felix Dzerzhinsky Workers' Defense Collective (a band of Communist security mercenaries) is entangled in a growing war between the Army of the New Republic (The ANR) who claim they are the legitimate government of the UK and the Hanoverian Regime - loyalists of the Royal Family.

The plot is complex, hell it took me a handful of reads to get everything, but well worth it. The other books in this series hold a similar place in my esteem - when I'm on re-reading bender I'll always read them all.

The narrator, Stephen Crossley, has one of those deep, gravelly, imposing voices that does well with this story. I've not yet listened to the other books in the series but I have looked ahead. They're read by different people, which makes sense since their told from different perspectives.

All in all, hard science fiction with plenty of political food for thought about what could be... and maybe what could still be.

this is a book that requires full attention, it's easy to miss something while riding your bike, driving, or doing any of the other activities you might be doing while listening. part cyberpunk, the story holds up well to time even to myself as a programmer. parts feel dated, but not to a distracting degree, those parts serve more to trigger your thinking about what people thought the electronic future might have been, vs what has transpired.

Loved the mixture of action and political ideas.
Real characters thinking about the consequences of their choices.

Since its publication, I have re-read this book countless times. And this Audio Book did not disappoint.

For at least the last decade this book has always been on ‘My Top 5 Best Books’ if not at the top of the list others have come and gone, as trends have grown and faded. But thought it all I have read and re-read this book.
Now, it is not perfect. The story does jump around a bit, and the protagonists are very left leaning politically. But I find the story to be quite fair in its stance, as neutral (Well fairly). The story is complex and has a bit of an odd ending..

For these imperfections, I have always had a hard time recommending it to friends. Many of them didn't like it, others did.. (Though I remain the most passionate about it).

So read it if you want, it may define your life (or may be not)

Too Painful to Finish....

If you haven't read MacLeod's books before, be warned that he has strong political views that permeate most of his storylines (somewhere between Trotskyist and anarcho-capitalist). I don't normally mind this (and have thoroughly enjoyed some of the author's other books), but the Star Fraction takes this to an extreme and was simply unbearable. The book amounted to 10+ hrs of dialogue about every twisted/extremist political view imaginable. Some of this was humorous, but most was just plain boring. Ultimately... I gave up about 6 hours into the book. It is a shame as the basic plot had alot of potential.

I suppose this is science fiction, if political science is your thing. I found this book on a Goodreads list of "Books Similar to Diaspora". Diaspora by Greg Egan is one of my favorite books and I am always on the lookout for works similar in scope and theme. The Star Fraction is in no way similar. If you are into religio-political science it may be quite good; it was nominated for the Arthur C. Clarke Award in 1996. I enjoyed the narrator. His accent and characterizations made pleasant background noise while I worked and were probably the only reason I finished listening to this one.

Political and technical "what-ifs" abound in this story of a man and his gun, but the interesting concepts are failed by dull narrative (not narration). Echoes of Heinlein's "Moon is a Harsh Mistress," but I never understood what was at stake for the characters or the world they live in: something about AI run amok, communist mercinaries, and a shock-jock anarchist? I found the characters indistinct and predictable Action sequences are few and not engaging. Narrator does a fine job, but I finally gave up on the story with just a half hour left.

After listening to the story for some time, I came to the conclusion that it would have been great stuff some 20 years ago. As a matter of fact, this is quite close to the real release date of the book: 1995. I've got no idea why it took almost 20 years to release the audio book.
As a result nowadays some of the "fresh" ideas on AI and social structures do not appear that fresh anymore. Most of them have been "reinvented" and told several times by other authors during the last two decades. Some have even changed their status from "SF" to "been there already".

The reader does a good job in terms of character representation and accentuation and makes listening an pleasant experience.

Conclusion: If you're in the mood for some solid old-school cyberpunk story-telling, you won't be disappointed - if you're looking for state-of-the-art SF, "The Star Fraction" definitely isn't up to standard.