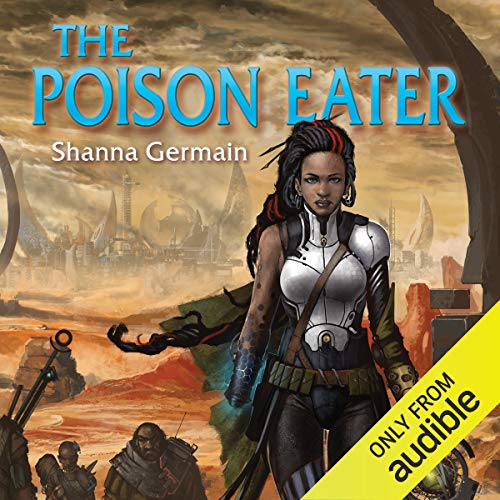 Talia was once one of the 12 martyrs of the forgotten compass, a prisoner of the unhuman creatures known only as the vordcha. She barely escaped that life with her body and soul intact. Now she has a new life as a poison eater in the city of Enthait.

Here she is hailed as one of the city's protectors. No one knows her history. No one has asked about her past. She's been here long enough that Enthait is her home now; these are her people. She loves them and they her. But in the Ninth World, the past is a living, breathing thing. And when it hunts you down, you can run. You can fight. Or you can die.

The book has an unexpected focus.

Would you listen to The Poison Eater again? Why?

I wouldn't, but I would like to listen to a continuation

What could Shanna Germain have done to make this a more enjoyable book for you?

The Poison Eater is based on a tabletop RPG setting called Numenera. So I presumed, it’s going to follow a group of adventurers who traveled through a world 1 billion years in the future. Through ancient ruins full of unimaginable, magick-like technologies of 8 prior civilizations. But we got a story of a woman with a dark secret, who came to live in a nice city. She is torn between her goals and her feelings for 9 hours of that audio book. The rest 38 minutes are dedicated to a short and forced action scene.

That said, Shanna Germain (the author) is really good with characters, so I can’t say I did not enjoy the book at all. The exposition is very slow in the beginning, but that is understandable because Nuemenera is sooooo strange. It takes time to describe it properly. The decision to reveal some key events as memories of the main protagonist, makes it hard to follow the book in small segments (many audible.com clients like to “read” their books while doing other staff).

Despite all criticism, I hope Shanna is going to write a continuation of the story. It has a great large opening for it in the end.

I probably didn't like it because it spends more time on inner brooding monolog about every single choice past, present, and future than I like. It does develop the character extremely well, you get to resolve her traumas along with her, every excruciating step. It's in a Sci-fantasy setting but does not feel or seem like a sci or fantasy book. It feels like a psychological trip down a very traumatized person's rabbit hole with little actual story or resolution. Everything is essentially background noise to the quantum level of infinite possibilities the character explores in her head that never actually happen.

Some people may appreciate that, but that isn't really what the blurb sold me. More details on what I mean by that in the spoiler section.

Has The Poison Eater turned you off from other books in this genre?

I'm turned off to the author and will probably start looking at narrators more carefully too.

Who would you have cast as narrator instead of Stephanie Cannon?

I haven't heard any of her other work, but if it's always so uniform and breathy, anyone. I'm not very aware of voice actors for books, I just listen to them and enjoy the story. I don't pick books by who read them but by who wrote them.

The author's powers of description of a distraught and worried mind are amazing! I know the main character of this story better than most characters I have ever read. If this character development was applied to a great story where something actually happens at some point outside of the character's mind I would probably enjoy this more.

For Numenra fans: I am a huge numenera fan and enjoyed some of the interesting ideas and images it conjured, but it wasn't worth the time consumed in the novel. You may like it if you are into romance novels; its the closest comparison I have. If you aren't into them, your time is better spent on forums.

The blurb says: "Ex-martyr turned city defender has to choose between herself and her duty when her past comes back with a vengeance."

She makes a whole lot of little choices that get her to where she can make 'the big choice', but again it is all a supposition about something that she "knows" is going to happen. There are a too many unresolved threads.

great tale in a stunning setting

to be fair I am I big fan of the Numenera RPG so this book was a must read. Shanna Germain did not miss a thing, she set character that felt real and alive in a the setting I love.

This is a terrific book. Definitely worth a listen (or read).

I really enjoyed the Poison Eater. It was an exciting and interesting fantasy novel. There was just the right amount of reveal slowly peppered throughout the story. Great, great, great. It kind of ends with an opening for a sequel and I really hope the author writes one. Sure, this is set in the universe of the Numenera RPG, but that is neither here not there. Don't let that dissuade you from picking up this book.

There is a sex scene that doesn't seem to fit. Not that a novel can't have a sex scene, but it just felt really out of place with the style and tone of the rest of the book. To be honest, it felt like it was stuck in there not to benefit the story, but to further an agenda of the author. Not a deal breaker, but it definitely took me out of the story and broke the magic.

The reader used a little-girl style voice for a few of the adult women characters. I thought that was a very odd choice.

But those are my only two issues with the book. You should definitely give this one a go!

Love the RPG, but not so the story

I am a huge fan of the RPG this book is based upon, but this story just fell short of my expectations. The RPG contains so much great material to draw upon...I just feel let down by this novel. Maybe another author will come along with a better plot line. I think I will just skip the next book in this series.

What did you love best about The Poison Eater?

Despite being a relatively short book, the author did a great job of setting up the world and it's characters. Everything and everyone felt complete and fully formed.

What other book might you compare The Poison Eater to and why?

For some reason, it reminded me a little of Scott Lynch's Gentleman Bastard series, which similarly created a complex and believable world.

I enjoyed the narrator's performance. She captured the essence of Talia's personality really well.

There was a moment toward the end of the book when it really clicked with me. The main character had an epiphany (as main characters often do), and it made perfect sense. It came out of the story and was, in retrospect inevitable, rather than dropping fully formed into the listener's lap with no notice.

I've never read anything by Shanna Germain before, so I didn't really know what to expect. I cenrtainly wasn't expecting this to be one of the mist enjoyable books Ive listened to in the oast year. So imagine my surprise when it was.

Okay for a free selection

It had so much potential. I don’t regret listening to it, but I definitely won’t be using a credit to continue the series. Which is a real shame because I’ve been hankering for some good LGBTQ representation and the main romance was two women and felt really well done! It was natural and really sweet. On the down side...

It was such an incredibly boring and anticlimactic ending. The entire climax felt defanged and super rushed. It’s almost like the author wasn’t comfortable writing some big epic battle scene for the final fight so she just didn’t bother. There was absolutely no feeling of tension or risk and there really wasn’t any loss at all. It was massively disappointing and left me entirely unsatisfied

Additionally the narrator didn’t feel like she fit the role. She did a good job! But especially with the cover illustration of this strong black female lead she just... underwhelmed.

Book isn't bad, just not what I was looking for

An interesting world, but we didn't explore it outside of what was necessary. No "action" really, the book sets up conflicts but we don't explore them either, just how the character feels about them. And the reader clearly gets alot of work voices young/child characters. This was a real problem for me when some general or lover or psychic technician sounds like a mature 5th grader. Wouldn't avoid the author, definitely not going to seek her out.

such potential, but fell short....

At the beginning this story seemed like it was going to come away as a winner. The further I got into the story, the more all the little shiny bits fell away to slowly reveal how sub standard it was in reality. The narrator did not do the writing justice at all. I can imagine that reading the book would give the story much more credibility and entertainment because the writing does seem to be captivating and descriptive in its words, but the narration of this audio book ruined it. She sped right through lines that are meant for describing the scene and did not bother to allow the words to have impact and to sink in to the listeners being and to form a true picture and feeling of the scene as the author intended.

By the end, the story itself felt very fragmented and rushed to reach an "ending". There was build up of moments strewn out the entire book, but only a few were followed up and tied in with the continuing story, the rest were just forgotten about i suppose. Its a shame because this book/story could have been really really great and could have easily produced 5 more hours of audio book if the author had not left things hanging all over the place as the story progressed. It brought about feelings of "huh?", "what happened to....?" and overall it just feels unfinished. I realize that this is labeled as "book 1", and that future books might fill in gaps here and there, but there are huge gaps in this book 1 that can never be filled by future books... they are lost because the author kept allowing herself to get distracted and heading off in different directions instead of focusing on bringing full completion to her story.

It was entertaining, and it was worth my 9.5 hours of listening. Especially since it was free to listen to. If I had paid money for this, I would have been very dissapointed.