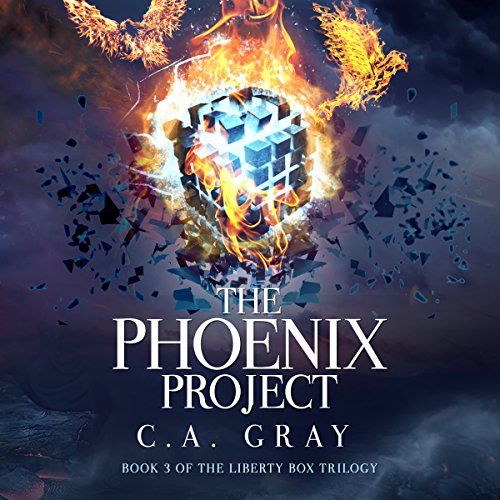 The haven city of Beckenshire has been demolished, and most of the rebels lie beneath the rubble. The few that remain scramble to communicate with the outside world, knowing that if they are to stand a chance in the coming war, they can't do it alone. In a last ditch effort to grow their ranks, the remaining rebels systematically destroy the repeaters which help to propagate the control center signals. And it's working: citizens in targeted cities are waking up in droves. But Ben Voltolini will stop at nothing to quell the uprising before it has a chance to get off the ground. And he has one major ace up his sleeve: Kate Brandeis.

During Kate's broadcast to the nation, Voltolini unleashed targeted brainwave signals against her, causing her to allow both Jackson MacNamera's capture, and her own. Now, despite Voltolini's exquisite wining and dining, she can't seem to stop the panic attacks. Whom can she trust? What is truth? Is there even such a thing?

Meanwhile, imprisoned and hopeless, Jackson realizes the depths of his feelings for Kate only after he has already lost her. The incredible self-control upon which he prides himself gets put to the ultimate test when he meets an unlikely ally who just may turn the tide in the rebels' favor - but only if Jackson can put aside his own bitterness. In this gripping conclusion to The Liberty Box Trilogy, new and surprising alliances are formed, passions run high, and our heroes learn what they are really made of. Do they have what it takes to fight for freedom - even if it means paying the ultimate price?

Yes! With this satisfying conclusion, I finally found myself enjoyed the story fully no matter who's POV I was reading. Not to mention the exciting ending! While not my favorite Dystopian, this one has some amazing scenes and plenty of action and intrigue.

The relationship in the story really blossomed here in the last book. I enjoyed the fast pace and the mystery that unfolded. Gray’s world is very exciting and I felt like she kicked it up a notch with this latest. I give it a 5/5 stars!

I also loved the audio on this 🙂 The narrator did a good job of making each character sound dostinct and full of emotion. I give t 5/5 stars.
I received this audiobook as part of my participation in a blog tour with Audiobookworm Promotions. The tour is being sponsored by C.A. Gray. The gifting of this audiobook did not affect my opinion of it.

It would be fair to say that The Phoenix Project neatly wraps everything up for the trilogy and so it does but that doesn’t really do the author justice. A lot goes on in this last volume and I got to know the characters even better, not always pleasantly.

With Kate being held in pampered captivity and seemingly completely under Voltolini’s sway, Jackson in the deepest of dungeons and the remnants of the resistance in tatters, it would appear that all is lost and the dictator has won but some of the rebels have a different plan. At the same time, Kate discovers Jackson in his cell and begins to doubt her thoughts, her implanted belief that he is a murderer and the cause of all that is wrong. Meanwhile, Jackson has his own doubts about himself but meets another prisoner who just might turn out to be a critical piece of his, Jackson’s, redemption.

In this third book, I came to dislike Will more and more as his need to control everything, especially Kate, became increasingly obnoxious. This man truly needs to be set straight about how to behave towards women and he really is kind of stereotypical but, truthfully, he was not my most detested character. That honor goes to Denise (I think that’s her name), Kate’s mother but I’ll leave it to you to find out why—I assure you it won’t be hard to figure it out. As for Jackson, I came away understanding that he is, indeed, very human and not a superhero, making him very likeable indeed while my empathy for Kate intensified even as I wanted to throttle her sometimes.

Narrator Melissa Williams still isn’t my favorite reader because she doesn’t differentiate voices all that well but I still enjoy listening to her. Her tone is very pleasant and I think her vocal strength comes at those times when characters are losing it. In particular, her shrill tones with both Will and Denise made their distress very evident.

All in all, The Liberty Box trilogy has been a pleasure to listen to and I’m glad I had this opportunity.