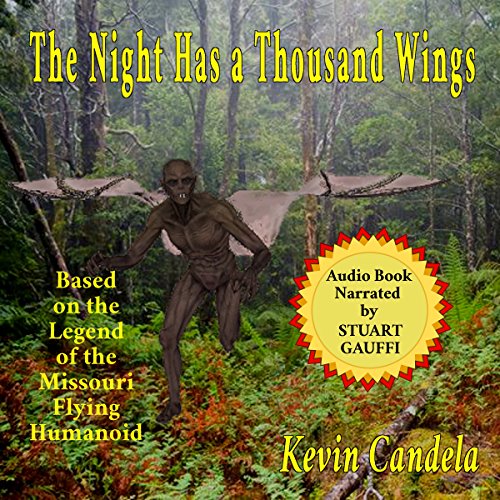 The Night Has a Thousand Wings: Based on the Legend of the Missouri Flying Humanoid

The Missouri Flying Humanoid is Nosferatu for real - a cryptozoological winged "human" reported to hang around Turkey Creek, Missouri. It's big as a human, with broad wings; a survivor who encountered one reported that it was strong enough to lift his truck up off the road. So when monster hunters Rollie, Eve, Taylor, and Ursula go after it, armed for bear, it's no mere snipe hunt in the woods - the game is life and death, and guns or not, the bold foursome are in way over their heads.

Ce que les auditeurs disent de The Night Has a Thousand Wings: Based on the Legend of the Missouri Flying Humanoid

This ain't no Mothman Prophecy, blood will flow!

Yeah, I'm really starting to appreciate Candela's work. He knows how to tell a story, create real characters, and place them into some weird situations, and make it all seem completely plausible in a short story. Again, I compare him to Roma Gray, another writer who can crank out some amazing short stories.

Candela places us out in the big MO, with a team of four cryptohunters who seek the elusive Missouri Flying Humanoid. Eve is the hardcase, who doesn't let her fear drown her and she goes on point when the crap starts to fly. I really enjoyed her character, and thought that Candela really knows how to flesh his people out. His story about their mission to bringback a body leads to them doing just that, although whose body or bodies they come up with I will not divulge. Suffice it to say, th MFH akes for a fantastic short subject, and beats the hell out of bigfoot any day of the week.

Gauffi does very well with the various caracters, their voices, and emoting their terror. He narrates you right into a corner, and you don't realie that you are stuck until it is far too late. By the time he drops the hammer you are well and proper out of options to turn off the book. You just have to hear what happens to our intrepid heroes.

Candela is really making a mark in the short story community, and I welcome antything he brings out to my reading desk. Even though I did receive a promo code for this review it in no way influenced my considerations of the material, and in fact, inspired me to be more honest. In fact, getting a code generally makes me harsher as a reviewer as I am more often concerned what someone like Me will decide based on my review.


If this review helped, please press the YES below. Thank you immensely!!!

This is an awesome little short story, with very good narrating provided by Stuart Gauffi. Also Kevin Candela knows how to spin a good yarn. I was provided this free audiobook through FABC at my request, and I am providing my voluntary unbiased review,

Loved it! Wish it were about 10 hours longer!! Fun story, especially at night!!

A really great horror short. Well rolled out characters and plot with the story all wrapped
Up in thirty minutes. The author also left plenty of room to revisit the horror and the setting. Really enjoyed this. I was voluntarily provided this free review copy audiobook by the author, narrator or publisher

Read about the FHM!

Great writing! The narrator made this come alive. I like the abbreviation about the “dumb superstition.” Watch out!!