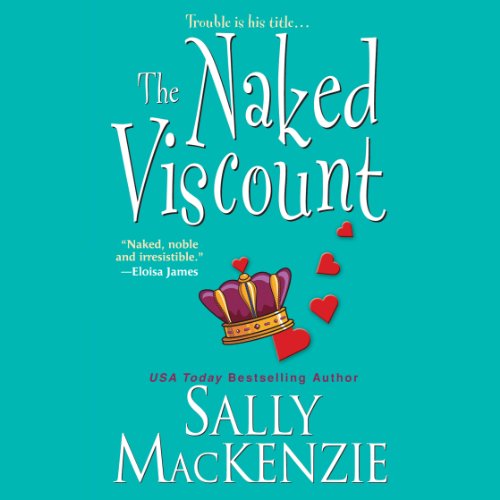 After eight seasons in London, Lady Jane Parker-Roth is ready to quit the dull search for a husband in favor of more exciting pursuits. So when she encounters an intruder in her host's townhouse, she's not about to let the scoundrel escape. Until she discovers she's wrestling a viscount - Edmund Smyth, the one noble she wouldn't mind meeting in the dark. And when their struggle shatters a randy statue of the god Pan, even more mischief ensues. Edmund was indeed searching for evidence of a scandal, but the shocking clues inside the nude statue are far from what he expected. The same can be said of Jane, who shows a talent for interfering in his affairs. And as his quest becomes more than a little improper, he finds the impetuous Lady has a talent for that as well.

I'm glad it's on Kindle

Setting: London
Genre: Regency romance
The story was above average when I read it on Kindle. Thank goodness for ebooks! And thank goodness the same narrator isn't used for other books in the series.
The character development was good, the plot was amusing. There were a few laughs, and it wasn't angst-y.
So, like I said, go get it on Kindle.

This is probably the funniest in the whole series .. I highly recommend .. the narrator was irritating at times especially in speaking as the aunts ..

Best of the series

This book is the best of the series. It at least has a plot. But the performance is one of the worst I have heard

It was a good effort but she just needs some more practice I think. The accents and voices changed all the time and the moans during the romance scenes were more like illness. But the story was fun and although Scandalous lol, it was a light hearted continuation of the Naked series. Jane and Edmund were great because they didn't spend all of their time doubting each other and there was just a little bit of angst rather than the whole book of it like several other naked books.

I have read this book before and wanted to be able to listen, but I can't understand why the narrator is reading this like a children's story.

A fun series with interconnected men leading the stories. The plots are fun and the situational humor is uproarious!

I loved this book. I stayed up all night to listen. I had to know how it ended. The were chuckles, romance and high suspense. If this book had a better narrator for the voices, there would have been some hilarious scenes. They were still funny, but not as funny as they could have been. I highly recommend this book!

OMG!!!!! I don't think the narrator could have delivered a screwier narration without being incredibly good at being BAD! It was AWFUL....Words drawn out painfully long and exaggeratedly wobbly squeaky whiney and just laughably awful.
Yet the story was SO good that I decided to consider the narrating as a tongue in cheek over exaggeration....