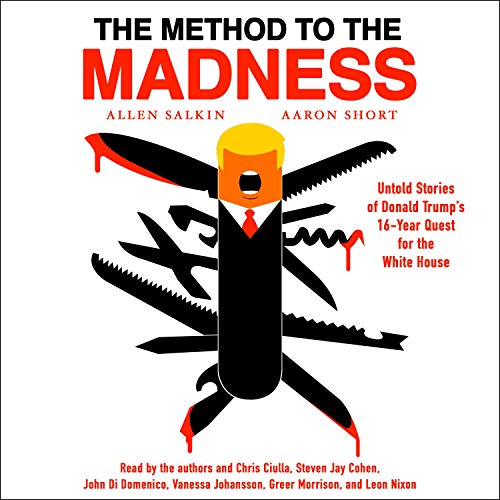 The Method to the Madness

The Method to the Madness

A Rosetta Stone for understanding Donald Trump's style, mind-set, and every action, made up of more than 100 interviews with his closest associates over the last 15 years.

To his critics, Donald Trump is an impulsive, undisciplined crackpot who accidentally lucked into the presidency. But in The Method to the Madness, reporters Allen Salkin and Aaron Short reveal that nothing could be further from the truth. This objective, nonpartisan oral history shows Trump had carefully planned his bid for the presidency since he launched what many considered to be a joke candidacy in 1999.

Between 2000 and 2015, when he announced his candidacy in the lobby of Trump Tower, he was able to identify an unserved political constituency, hone a persuasive message that appealed to their needs, and deliver it effectively, despite intense media opposition.

Through candid conversations with more than 100 subjects close to the president, Salkin and Short make the case that Donald Trump’s ostensibly erratic approach to politics is consistent with his carefully honed personal and professional style of information-gathering, opinion seed-planting, and conclusion sharing. His business, media, and political dealings from this era serve as a guide for understanding the man, his mind-set, and his every action.

The Method to the Madness is an accessible and unbiased oral history that brings listeners into the private rooms where decisions are made, confidences are broken, strong words fly, and not all eyewitnesses see the same scene in quite the same way.

I would change the tile to “Madness to the Method”. “The Madness of Donald Trump”.

Don't believe it when people tell you that Donald Trump got angry at Barack Obama at the White House correspondens' dinner and then decided to run for president. He had been planning to run for president for many years. This book details the steps that Trump took to prepare himself, and shows his unique abilities to suck all the oxygen out of the political room and keep the focus on himself.

As entertaining as it is interesting, this book is a unique look into the life of Trump and his road to the White House. I appreciated that it was neither pro or against him, just the facts!