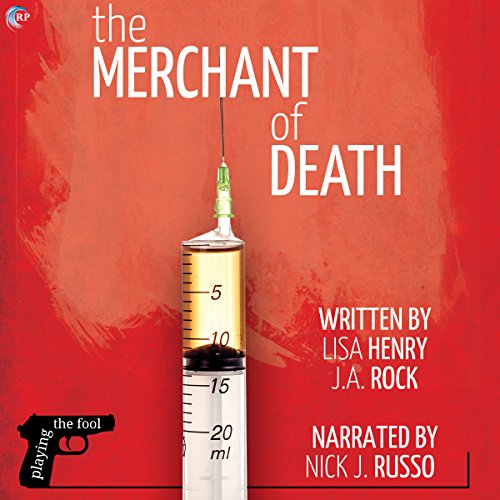 All's fair in love and war.

There's something rotten in the state of Indiana. When con man Henry Page takes it upon himself to investigate the death of an elderly patient at a care facility, he does so in true Shakespearean tradition: dressed as a girl.

FBI Agent Ryan "Mac" McGuinness has more to worry about than Henry's latest crazy idea. Someone is trying to send him a message - via a corpse with a couple of bullets in it. He needs to figure out who's trying to set him up before he gets arrested, and he really doesn't have time for Henry's shenanigans. Then again, he'd probably be able to focus better if Henry didn't look so damn distracting in a baby doll dress and a wig.

But when Mac discovers that Henry has been keeping a secret that connects the cases, he has to find a way to live on the right side of the law when he just might be in love with the wrong sort of man.

Nick J. Russo does it again!

While the story didn't pack the same punch for me that The Two Gentlemen of Altona did, it's entertaining, mainly thanks to Henry's continued misbehavior. It's also really interesting to see the threads woven from the start starting to finally show a pattern in the overarching mystery of the series and it makes me all the more anxious to find out what's really happening.

In the end, though, it's the narration that once again takes center stage and continues to blow me away. Nick J. Russo does such a fantastic job with all the characters voices and the tone of the story. He even managed to kept me enthralled at a point when, if reading, I would have thrown the book across the room in a fit of pique.

Mac and Henry are back and the story picks up just where The Two Gentlemen of Altona left with Henry racing to his twin sister, Viola's, side. Viola is in some trouble and Henry is determined to investigate the matter, much to Mac's consternation as Henry goes "undercover" as his twin sister to discover if there's an Angel of Death at his sister's care home.

Mac's distracted by Henry's shenanigans, but also by the fact that he's come under investigation for some pretty serious charges at the Bureau. When it turns out that Henry is linked in some ways to what's happening, it's up to Mac to decide whether he can trust Henry or not.

~~QUOTE~~
He almost turned back. Wasn’t that what you were supposed to do? You were almost out of the building or on the plane or driving home in the rain, and then suddenly you turned around and raced back and told the other person how you felt. And then they said they loved you too, and you kissed, and the credits rolled. No word on what happened next. How you dealt with the fact that one of you belonged in a prison cell, and the other should be facilitating that.
~~QUOTE~~

Bottom line, this is an entertaining story, a terrific series, and extraordinary narration. Note, this story once again ends on Quantum Leap cliffhanger-ish type ending, which I hope will be picked up and finally resolved completely in Tempest (Playing the Fool #3), which will be released soon on audio.

For me, this series just gets better and better. I differ in her opinion in that I think this is not a story you skim. It is fast paced and rich in detail and every line is important.

I love the depth with which the characters are drawn and though my heart bleeds for all the sad life stories in this story, I am also rooting for them wholeheartedly.

Henry’s antics in Viola’s home are hysterical and the racy interactions between Henry and Mac while Henry is dressed as a girl were superb!

The romance moves forward in a very satisfying way (aka super HOT), as does the connection between Mac and Henry (aka super sweet).

I’m really enjoying this series and I was grateful I could move on to book three when I read the series.

Nick J Russo is a fantastic narrator and always does a quality job. He does a wonderful job of giving Viola and Henry as Viola a subtle difference but still feminine. I love this sequel and – as always – love Nick’s interpretation of it.

Book 2 in this series picked right up from the ending of the first story. The intensity really picked up as well, really loving everything about this series. Mac & Henry are wonderful, it's fun to see them get to know each other, overcome their own insecurities through this suspense storyline. Nick Russo is fantastic and I am so disappointed that the audible is not available yet, but no way am I waiting - on to book 3 NOW.

The story starts exactly where the last ends. We are given answers to the questions in the first book and given new once.
I expected another awsome continuation. I dont know what is more of a let down the fact that what made the characters funny, smart, and intresting in the first book and worth listening has been gutted and everything boring and typical replaced with a twist, "Come On !", said the paying customer. no chemistry between characters or more like boring chemistry , where is the poke and prod a little conversation sparing. I get it you are trying to show growth between characters but that is not what attracted us to your book in the fist place. please fix that when I can't crack a smile in the first 9 tracks there is something wrong.

Really enjoying this trilogy. It’s cute and funny. Looking forward to the next book. Nick does the best job with both Henry and Mac!!

What did you love best about The Merchant of Death?

I loved that it took the strengths of book one- characters and situation- and made it stronger and better in book two. The enigmatic, but totally charismatic Henry Page is more so. The stalwart, but down to earth Mac who has a weak spot for one Henry Page is more so. And instead of one, there are two mysteries. And new players and more about the current cast. It was just more and I loved that.

Henry Page- he is so confused and so mixed up. He can't even figure himself out. But for all his shenanigans, he cares and he gives. He is terrified of the feelings he has for Mac, but yet he wants this man to respect him and want him. He needs Mac to be the first person who doesn't let him down.

What about Nick J. Russo’s performance did you like?

Can I say Everything? Yes, because that would be true. I think I'd stop listening to the series if Russo wasn't the narrator. I read the trilogy through and there is always a danger to listening to some one read a story after the characters are already established in my mind with voice and personality, but with Russo's narration they became clearer and truer. Or at least that's the best way I can describe it.
Plus timing and tone. I felt he nailed the essence of the story. I could laugh and sigh and feel like I was right there.

Who was the most memorable character of The Merchant of Death and why?

This would be Viola. The first book hinted at her and her situation and who she is definitely affects Henry. But to meet her was wonderful. She has a traumatic brain injury, but this doesn't restrict her. She thinks, feels, and knows things. She's intuitive about people and was the catalyst to getting them to see themselves better.

This is book two and it most definitely builds on book one so should be read in order.

My thanks to Riptide Publishing for the opportunity to listen to the book in exchange for an honest review.

Some Sequels Are Just As Good as the First

Merchant of Death is just as good as the first book in the series but in a different way. Be prepared for less humor and to learn more about Henry and why he is the person he is. Once again the narration by Nick J Russo is fantastic.

It took me a little longer to get through this book because so much of it was behavior I didn’t like in the first book. If you loved the characters of Henry and Mac, you’ll still love them in this book. As always, the narrator does a great job!

Did the story keep me engaged: yes
Were there any parts I found annoying: another abrupt ending.
Did I feel an emotional connection to the characters: yes
Would I listen to it again: yes

• picks up where Book 1 finished, builds on & strengthens the relationship between the 2 MC's with a mystery thrown in.
• doesn't have quite the entertainment value as Book 1, but there's still plenty going on and it has a good pace.
• drugged Henry is a hoot - so is "Mac and Cheese"

• Nick J. Russo does a fantastic job at bringing the characters to life, his narration and timing is spot on, down to subtle differences between voicing Viola and voicing Henry as Viola that still keep it feminine.

It was really good.

This was a nice story, I already knew and love the characters, especially Henry. It had the same humorous style the previous book had, but I feel like this one was a bit more serious and it take some attention to a very interesting subjects, not usually mention in books.

I loved the relationship between Henry and Viola, it was very sweet and also heartbroken to understand the whole situation. Viola among some other secondary characters were amazing. I really enjoyed her and Remi, and loved to hate some others.

Mac was also fun to read, it was very interesting to expect his reactions from the situations he was into and how much he let his feelings get involved in his job. His relationship with Henry is so much entertaining, I love the way they interact with each other, they’re great together.

The narration was great, I don't generally like audiobooks, but this one is one of the exceptions, I think the narrator made a great job giving voices to Mac and Henry, it was so easy to know one from the other. It had a very nice way to make transmit the emotion, it was a great experience.

I feel like I liked the first book better, but I really enjoyed this one, and I’ll surely move on to the next one to know what the authors have prepare for Henry and Mac.